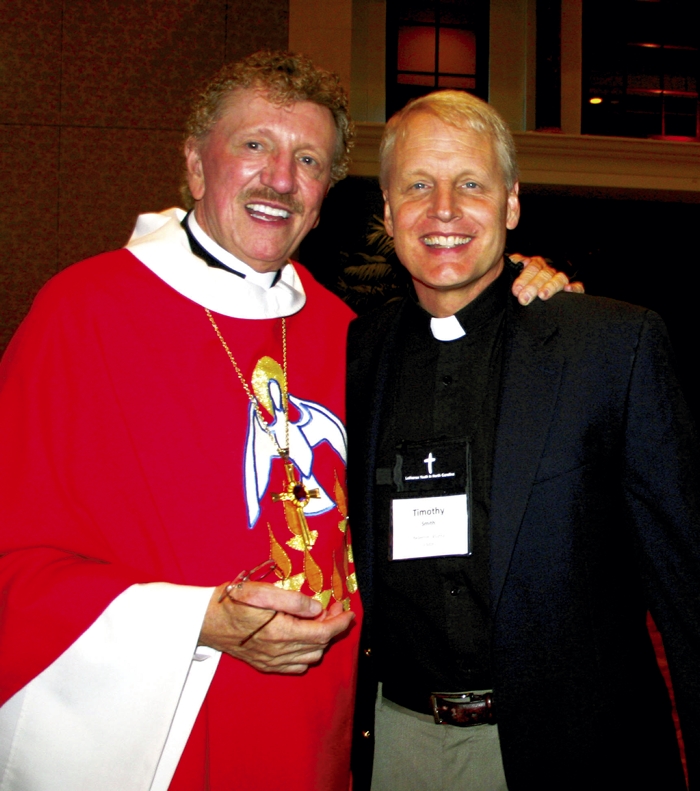 On Saturday morning, the Rev. Dr. Timothy Smith was elected bishop of the North Carolina Synod of the Evangelical Lutheran Church in America, during the final day of the annual gathering, which took place at the Koury Convention Center in Greensboro.

Smith, senior pastor of Redeemer Lutheran Church in Atlanta, grew up in Salisbury and attended St. John’s Lutheran Church, where his parents are members. He is the son of Marcus and Dot Smith of Salisbury.

Some 624 voting members of the assembly — including some 234 clergy and 374 lay voting members — elected Smith by a margin of 301-276 votes. On the fifth and final ballot were Smith and the Rev. Mark Fitzsimmons, pastor of Lutheran Church of the Nativity in Arden.

“He is a homeboy who’s coming home,” said the Rev. Phil Tonnesen, an assistant to Bishop Leonard Bolick. Tonnesen was on the fourth ballot Friday evening, along with Smith and Fitzsimmons.

“He is much loved and respected in this Synod,” Tonnesen said. “He has a pastoral heart, a goofy sense of humor, and a passion for campus ministry, and for youth and young adult ministry, which will serve us well.”

Smith’s election may have come as a bit of a surprise to some people, as he is not a member of the North Carolina Synod. However, any member of the ELCA clergy may be nominated on the first ballot, and Smith placed second behind Tonnesen. He arrived in Greensboro Friday morning with wife Wendy, wearing a “visitor” designation on his name badge.

He said Friday that he was the “mystery guest” at the assembly.

Tonnesen noted Saturday, however, that Smith had served as senior pastor of Grace Lutheran Church in Boone from 1993-2010, where many vacationing Lutherans got to know him. He was also a member of the Synod’s candidacy committee for a decade. Smith also served at St. Paul Lutheran in Newton from 1986-1993.

Smith received a B.A. degree in religion from UNC, and a master’s degree in divinity from Lutheran Theological Seminary at Gettysburg in 1986, the year of his ordination. He received a doctoral degree in ministry from Drew University six years later.

Smith was a Morehead Scholar at the University of North Carolina at Chapel Hill, where he played junior varsity basketball for Coach Dean Smith. The bishop-elect is known to have a way with words — and even may sing a note or two during his sermons.

But Smith was at a loss for words Saturday morning — for perhaps the first time ever, he admitted.

“I am humbled,” he said. “I’m excited. I need to say goodbye to my congregation in Atlanta and get ready to come to North Carolina. With the big picture, I’m completely good.”

But, as bishop, he said, he doesn’t know what to do yet. “I’ve never attended a churchwide assembly. I’ve never been on Synod Council.”

He will have lots of help and counsel. The Rev. Chris Boerger is secretary of the ELCA. Shortly after Smith’s election, Boerger handled him a thick envelope on which he’d written “My Life.” The contents included the ELCA’s national calendar for the next six years.

“I’m shell-shocked,” he admitted, “but God’s got this. With my family here, my heart has always been, and always will be, in North Carolina. Those roots are just too deep. I feel very, very hopeful about who we are as a Synod as who we are as a church.”

Smith and his wife, Wendy, met at UNC. They have three children: Matthew, Isaac and Ruth. Matthew Smith is pastor of Holly Grove Lutheran Church in Lexington.

Smith will be installed Sept. 12 at Christ Lutheran Church, Charlotte.

Bishop Leonard Bolick’s last day in office is July 31. During the assembly, Bolick received the title of bishop emeritus.

“It was exciting to see this call committee at work,” said Bolick, who noted it was the largest such committee with which he’d ever worked. “We had marvelous candidates. Tim has wonderful leadership skills. He’s articulate, he’s an excellent theologian, and he’s a visionary. He will be able to take us into the future in wonderful ways.”