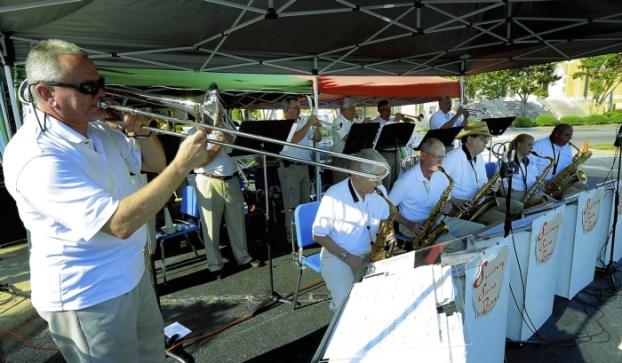 The Salisbury Swing Band will be back again this year to perform before the annual Pops at the Post concert.

Beginning under the name Catawba Community Band, the Salisbury Swing Band was formed as an “offshoot” to the community group. When the college band grew larger with students, the community members decided to form their own band to continue playing. Today, the band is made up of sections including saxophones, trumpets, trombones, and rhythm. The band also features female vocalist Laura Millspaugh.

Salisbury Symphony Executive Director Linda Jones says that having the Salisbury Swing Band warm up the crowd before Pops at the Post was an “obvious choice.”

“The band plays wonderful music and is definitely a crowd pleaser. It’s a lovely way to start the concert,” she said.

The swing band generally performs for community events including weddings, dances, and charity functions. When the opportunity presented itself, Etters inquired about performing for the Pops at the Post concert.

“It started out as just a one-time event, but we keep getting invited back every year,” Etters said. “We just really enjoy performing for the public. Our mission is to preserve the music from the swing era and to entertain audiences of all ages.”

The band will perform from 5 p.m. until 7 p.m. in the parking lot across from the Salisbury Post.

By Susan Shinn For The Salisbury Post Hen Henderlite and Shari Graham will be happy to share most of their... read more