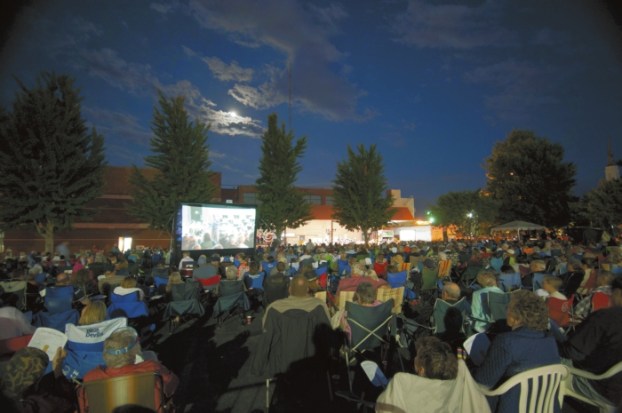 Truth be told, Maestro David Hagy didn’t start working on this year’s Pops at the Post program until after the print deadline for the fans. Never fear, the popular “I’m a Fan of Pops at the Post” fans won’t be blank.

The music for this year’s 11th Annual Pops at the Post reflects the theme of “Rowan Life.” The popular event featuring the Salisbury Symphony Orchestra is set for sunset on Saturday, June 6. Patrons sit in parking lots across from the Salisbury Post loading dock on South Church Street.

It wasn’t as if Hagy wasn’t trying.

“Nothing seemed obvious this year,” he says. One day, he sat down to work on a theme based on American songwriters. Spent the whole day on it. Nope, that wasn’t it, so at 5:30 that afternoon, he started over.

What about Life in Rowan?

“What do we do here?” Hagy asked himself, and started filling in slots.

We go to work, we go to church, we go out to eat, we go to concerts and we go to sporting events.

As always, the evening begins with the concert version of “The Star-Spangled Banner” by John Williams, arranged by John Stafford Smith.

Next, because we go to church and out to eat, we say grace, Hagy says. “Be Present At Our Table, Lord” by Loys Bourgeois is set to the hymn tune of Old Hundredth (The Doxology), and folks are welcome to sing along, if they wish, according to Hagy.

Because Spencer Shops is a place we have worked for many years, Hagy has a train medley planned. The medley, he says, was arranged by Chuck Farmer especially for Spencer Fest a few years ago.

We go to sports events and football games — which include marching bands — so Hagy has included “The Thunderer March” by John Philip Sousa.

“I knew that would make Fred Stanback happy,” the conductor says of the symphony supporter and lover of Sousa marches.

What else do we do?

Well, Hagy notes, there are certainly some couch potatoes among us. So he’s selected the theme from “Hawaii 5-0,” along with “Hits the Fan” from “The Good Wife.”

Amazingly, he emailed that composer, Dave Buckley, who sent him the score at no charge.

“That blew me away,” Hagy admits.

Because we go to concerts, Hagy had an arrangement done of the wildly popular “Uptown Funk.”

With the recent Blues and Jazz Festival in the books for another year, Hagy wanted to play some jazz music to honor that local tradition. He’ll include a jazz medley for the orchestra.

And because we go to concerts to see local musicians, Hagy included a Salisbury Ladies Medley in the program. Wendy Weant will perform “Hit Me with a Hot Note and Watch Me Bounce”; Rosemary Kinard will perform “Barcaolle” from “The Tales of Hoffman”; Rebecca Stinson will perform “Nobody Knows You When You’re Down and Out”; and Teresa Moore-Mitchell will perform “My Man’s Gone Now” from “Porgy and Bess.”

And of course Salisburians go to the orchestra, so Hagy included “Enigma” variations from “Nimrod,” which the symphony performed last season.

Since we go to the movies, Hagy has included music from “Frozen,” which should thrill young concert-goers.

The second half of the concert will include the traditional favorites, “1812 Overture,” “The Salisbury Post March” and “Stars and Stripes Forever.” Hagy already knows that one encore is the Carmen Dragon arrangement of “America the Beautiful.”

The other encore? Well, you’ll just have to wait and see.

Pops at the Post is June 6; tailgating spots available

SALISBURY – The first Saturday in June, downtown Salisbury is host to thousands of people attending the annual Pops at the Post concert.... read more