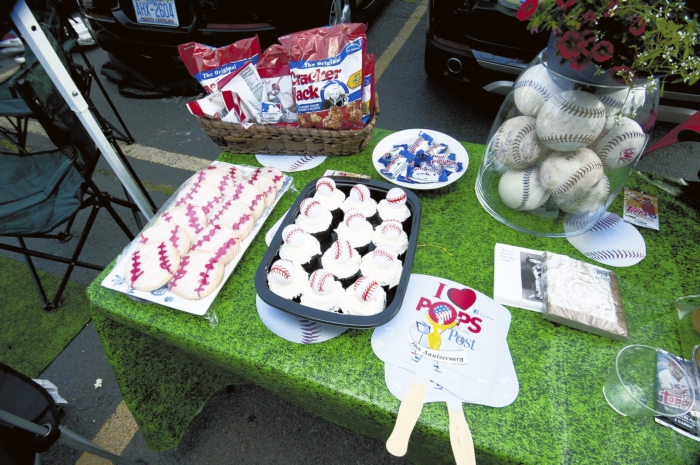 Hen Henderlite and Shari Graham will be happy to share most of their tailgating secrets with you — if you can get them to stop laughing long enough to do it.

The two are the reigning queens of the Post’s First Annual Tailgating Award from the 2014 edition of Pops at the Post. They have the paper-plate award to prove it, too.

Which they will display proudly at this year’s tailgating contest. They’re not above intimidating opponents.

It’s definitely all in good fun.

Hen and Shari can’t wait for this year’s contest.

This dynamic duo decorated their tailgating spots even before the contest began.

“Every year, we put down a carpet,” Hen says, “because my son Jay says it needs to look homey.”

Around town, there’s nary a fundraiser, wedding reception or party in which they haven’t played a role. And perhaps astonishingly, they don’t charge a dime for their efforts.

“We play off each other and explore our creative sides,” Hen adds.

They both serve on numerous local boards, and consider it a challenge to decorate as inexpensively as possible — they want the money to go into the causes, not the décor, they say.

“We do not charge for this,” Shari says. “We do it because we love it, and we love the people who ask us. It’s flat-out fun.”

Both empty-nesters now, party planning is a way for the women to rechannel their energies — that and the occasional tennis game.

“I think we’ve reinvented ourselves this way,” Hen says.

Shari stores all their finds in her expansive attic.

Looking for items centered on a specific theme? Mexican? Western? Valentine’s? Beach? Chances are, Shari’s got it.

“Honey, I’ve even got wagon wheels in my attic,” Shari says, laughing. “Instead of Garden Ridge, we call it Graham Ridge.”

The women comb Walmart, Big Lots, the Salisbury Emporium and consignments shops for treasures they can use and repurpose.

For Hen and Shari, no theme is too crazy, and they love to think outside the box. Speaking of boxes, they once used cans of spray paint and yards of ribbon to recreate Tiffany boxes. Most folks at that party thought they were the real deal. Then there was the table tops event at which Shari and Hen used Dr. Gayle Yatawara’s “tools of the trade” to create unforgettable napkin holders.

No wonder they laugh so much.

Of course, they’re already thinking about this year’s Pops theme, and how they can apply it to their tailgating set-up.

Last year, they took the sports theme and ran with it —so to speak — to create a space that paid homage to baseball, complete with a baseball diamond carpet and ballpark food for refreshments.

Chances are, some early-morning texts will be flying the next few days.

“We’re both really early risers,” Hen says. “We text each other about 5 in the morning.”

“Finish each others’ sentences,” Shari finishes. “It’s scary. But don’t ask us our opinion if you don’t want to know. We will be honest, in a nice way.”

Both look forward to Pops, they say, because it’s such a unique event.

Shari, who came from humble beginnings, says that these days, she could go to a designer and get everything she needs, but she just loves looking for bargains.

Hen and Shari give effusive praise to their husbands, Jon Henderlite and Bill Graham.

“Bill and John are the most understanding and supportive husbands,” Shari says.

“They always come help us clean up,” Hen says.

The two have nixed the idea of putting their design skills to work in a business. Doing so, they think, would take all the fun out of it.

“This way,” Shari says, “we can be as creative as we want. There are no limits. Realistically, it’s our reputation.”

It’s also one way they can support numerous fundraisers.

“If we can inspire people to come to these events,” Shari says, “it’s a win-win.”