Kabobs to coffee, food and drink a big part of 2015 Pops at the Post 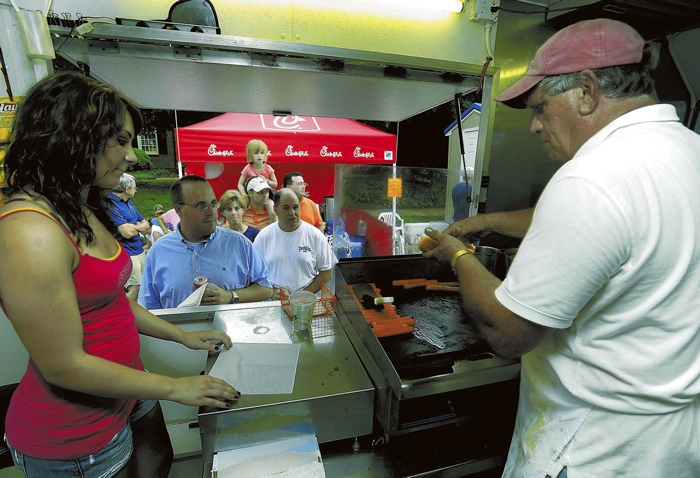 Concert-goers line up for hot dogs in 2010. Wayne Hinshaw/For the Salisbury Post

Food vendors are always part of the festivities at the Pops at the Post concert. With choices ranging from the traditional southern comfort foods to varieties of sweet treats, there is surely something for everyone.

“I am always grateful to all of our vendors for agreeing to come out and participate in the event,” Pops board president Audrey Eudy said. “Their support helps us come back year after year.”

This year, the vendors include some that will be familiar to people who have attended previous Pops at the Post concerts, and some that are making their first appearance at the event.

Here’s a rundown of who to look for:

Since opening its doors in March, Mean Mug Coffee Company has been serving up drinks with a Latin American touch.

Owner Evelyn Medina has been attending the Pops at the Post concert since moving to Salisbury.

“I look forward to going every year. My kids get exposure to good music, and it’s just a fun time,” she said.

Now, as a business owner, Medina will be attending as a vendor, serving iced and hot coffee as well as hibiscus tea, which is popular in Guatemala. Made from the hibiscus flower, the tea is a “thirst quencher” and should be a hit for concert-goers.

“We have never had a vendor offering iced coffees and teas,” Eudy said.

“We were asked to come back, so I guess we are highly recommended,” owner Brian Culp said. Culp will also serve canned drinks and chips.

On a hot summer day, what is a better way to cool off than a serving of Italian ice? Owner Jason Slusser will be returning to the concert this year with 10 different flavors of Italian ice. The three most popular flavors, he says, are mango, strawberry-banana, and tie-dye (lemon, lime and blue raspberry).

“The concert was my first event when I began the business seven years ago,” Slusser said. “There is always a good turnout, and it’s a lot of fun.”

Attending the concert every year since the beginning, Meat on a Stick will be present once again serving pork and chicken skewers with grilled corn on the cob.

Kabob’s Gourmet Food Truck, owned and operated by Andrew Dionne and John Rojas, will be serving their tasty Greek cuisine. This is the second year that Kabob’s has been at the concert.

For many years, Mr. Cone ice cream has been involved with the Pops at the Post concert, and this year will be no exception. Serving premium soft serve ice cream with waffle cones, owner Joe Bello will be making shakes, sundaes and banana splits, as well. Prices range from $3 to $6.

“We love being involved in the community and especially this event,” Bello said.

Popular new downtown restaurant Romo’s will be offering their delectable slices of pizza for the first time at the Pops at the Post concert.

Pops at the Post just wouldn’t be the same without the legendary southern drink Cheerwine. Once again this year, they will be serving Cheerwine and diet Cheerwine from their trailer in the old First Bank parking lot near West Innes and Church streets.

“Cheerwine is a great sponsor. Their offerings of free Cheerwine and diet Cheerwine are crowd pleasers and have come to be a tradition,” Eudy said.