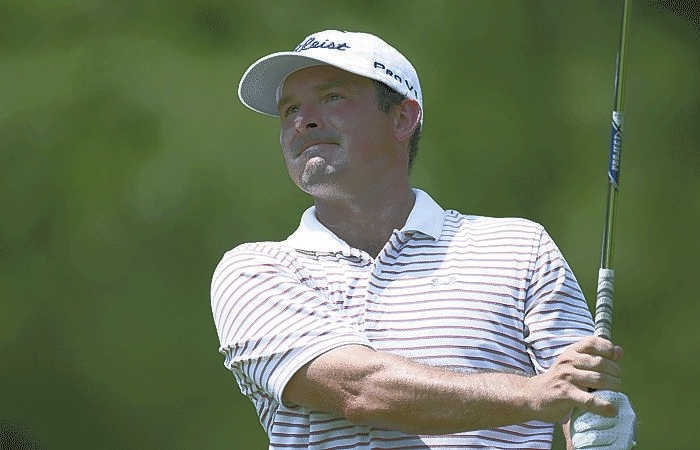 Adams, the tour’s longest-tenured player dating back to 2003, entered Sunday’s final round at Sound Golf Links at Albemarle Plantation with a three-shot lead after starting the tournament with rounds of 67-67-64.
A Laurinburg native who played at East Carolina, Adams bogeyed the first hole Sunday and had a three-putt bogey on No. 6, as his cushion disappeared. He was 1-over after nine.

“I felt like a pinball in a pinball machine,” said Adams. “I couldn’t quite get comfortable. It wasn’t because I was nervous; it was just one of those weeks where everything had gone pretty dang good up to that point. That was just the first stretch of adversity.”

Adams had to make a 10-foot birdie putt on No. 16 just to be part of a three-way tie for the lead.

“That was huge for me,” he said. “That was a big momentum swing back in my favor.”

On the par-5 No. 17 hole, Adams sailed his third shot 15 feet over the green. But he converted a 40-foot flop shot from there to retake a one-shot lead.

Adams, 36, didn’t hit a great tee shot on the par-4 18th hole, but he hit a sand wedge from 94 yards out within 10 feet of the pin and then rolled in the putt to win by two strokes.

The ensuing fist pump not only represented win No. 8 for Adams, but represented one phenomenal finish after birdies on 16, 17 and 18 delivered a final-round 69 and the event’s first-place prize.

“It’s pretty cool. We don’t have galleries like that very often,” said Adams. “The members here were great all week and really supported us throughout. The last two days were some of the most fun I’ve had playing golf.”

Adams has won $47,735 this season and ranks second on the eGolf Tour in earnings. Adams tied for fourth last week in the Willow Creek Open.

Nearly 11 years after capturing his first win on tour, Adams looks poised to continue his march up golf’s proverbial ladder. As a conditional member of the Web.com Tour, he’ll spend many Mondays trying to chase dreams in 18-hole qualifiers.

With his win today, that dreaded march looks a bit more colorful.

“It means a lot to get this win,” continued Adams. “I’m kind of playing with house money a bit more this year than normal, so this frees me up to see how good of a year I can have,” said Adams. “If I can just tighten my game up here or there, I should be able to have some success in those qualifiers. And from there, we’ll just see what happens.”

The eGolf Tour’s next event is the Spring Creek Classic on June 17-19 in Gordonsville, Va.

Adams is married to Allison Dupree Adams, a teacher in the Rowan-Salisbury Schools and a former cross country standout at East Rowan High and Catawba College. They have a one-year-old son.

Adams’ brother, Stewart, played football at Appalachian State and Catawba, and also resides in Salisbury. Another brother, Russ, played major league baseball with Toronto and the New York Mets, before retiring a few years ago.

Stewart Moore of eGolf Gateway Tour contributed to this article.