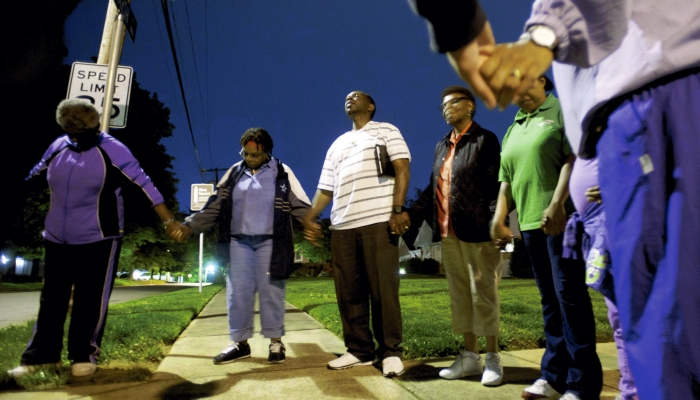 By Shavonne Walker and Josh Bergeron

The family unit, regardless of its composition, is often seen as the most important part of a child’s development. In many areas of Rowan County and Salisbury, however, the community has quite literally taken a lead role in raising children.

Evidence of the community’s role in child development is most visible in Salisbury’s West End and economically depressed areas of Rowan County. As the calendar turns to summer and the school year ends, community groups ramp up efforts to provide constructive programs for children. Many also operate during the school year. Some of the more recognizable groups include Nightcrawlers, Man Up Monday, C.O.M.P.A.S.S., LIFT Academy and Gemstone Academy.

C.O.M.P.A.S.S., run by community activist Alex Clark, is a result of his personal experience, and an effort to prevent at-risk youth from becoming involved in delinquent activity. The name of his program is an acronym for confident, optimistic, motivated, prepared, assertive and self-sufficient.

Clark, who served 17 years in federal prison for a drug charge, uses his personal experience as an anecdote in his program. Now, Clark says he’s on a mission to prevent at-risk youth from falling victim to delinquent activity.

“If the village isn’t raising the child, then the children will burn it down just to get the warmth of it,” Clark said.

As a part of C.O.M.P.A.S.S., Clark talks to children in schools and in the Salisbury community. He also spoke to children during a mentorship program hosted by the Salisbury-Rowan NAACP group.

C.O.M.P.A.S.S., however is just one of the many programs aiming to make a difference.

Every Monday without fail a group of African-American men walk through the Knox Middle School cafeteria exchanging high-fives and small talk with a group of boys sitting at tables. It’s a gesture that invites the pre-teens to talk about their possible struggles or just talk sports.

The men are apart of a group called Man Up Monday, it includes local ministers, businessmen and other community leaders who are able to offer the teens a positive male role model who meet them in their school environment.

About a year ago, residents in the West End community and local law enforcement held several community meetings to discuss the crime in the area. The solution, many said, was to target youth and give them something positive and productive to do with their time. Local pastor Tim Bates heads up the program and began it as a way to motivate students and it has evolved into mentorship and a support system for the students.

The program kicked off at Knox Middle School in September and has since expanded into Isenberg Elementary, Hanford Dole Elementary and North Rowan Middle School. The mentors go to the schools and interact with all the students and if the teens want some one-on-one time, they do just that, Bates said.

“We ask about grades and we let them know someone is on their side. Or we go outside and play kick ball,” he said.

Bates admits there was some resistance at first, but now says the teachers and administrators have warmed up to the idea. He’s tried and still hopes Man Up Monday will reach all of the elementary and middle schools.

The reason the men meet on Monday, Bates said, is because the students are just getting back into a routine from the weekend and it’s a way to “jump start” them for the coming week ahead.

A few students recently had etiquette sessions and afterward had lunch at DJ’s Restaurant on West Innes Street to put their skills to the test.

The Life Skills Instruction For Teens (LIFT) Academy is an example of where efforts begin to intertwine.  The after-school program — for at-risk teens ages 14-18 — began in October and is the creation of Darryl Bego, a former journalist and educator. Bates is also a mentor with the academy.

Male and female students are enrolled in the program based on referrals from the local Juvenile Justice Program, school guidance counselors and school resource officers, some because of low academic performance, behavioral issues, or court mandates. Mentors meet with the students at Livingstone College from 3 p.m. to 6 p.m. on Monday, Tuesday and Thursday. Students are encouraged to be honest and open with the group as well as share their goals.

Upon graduation, students are guaranteed internships through local businesses and organizations.

Gemstones Academy is another example of a program where efforts begin to merge.

Rowan County resident Alisha Byrd in January founded Gemstones Academy, a nonprofit designed for boys and girls who are enrolled in 5th-12th grades. Teens attend workshops, seminars that focus on self-esteem, leadership, education and meet from 12 p.m. to 2 p.m. on the second Saturday of each month at Miller Recreation Center. Clark has previously helped with organization and content taught in the meetings.

Byrd said bringing her program to the West End community is great, but the organization is open to any community, and isn’t just for African-American youth.

The teens have also participated in community service projects including serving clients at Rowan Helping Ministries’ shelter. The children have also had etiquette classes and will at the end of the year put those skills into practice by attending a black tie ball.

She said she hopes that teens get inspired to be empowered to be better, do better and achieve better.

She said children who are involved in activities like Gemstones Academy and other area programs leaves little time to get involved in illegal activities.

A friendly smile and a game

Some groups have taken a less formal approach to curbing and preventing delinquent activity.

As a part of the Nightcrawlers program, North Rowan High Coach Andrew Mitchell opens up Royal Giants Park in East Spencer for a few games of nighttime basketball. The participants run through a few drills before delving into the game.

“You learn about teamwork, discipline and you learn patience,” Mitchell said. “There are just so many things that you can learn from the game of basketball. It’s one of those games that even if you can’t play, you think you can. Basketball can be used as a vehicle to teach them other things.”

As the sun dips below the horizon and dusk turns to night, the lights flip on at Royal Giants Park. Mitchell, who is the park’s director, said basketball keeps the kids off of the streets by doing something enjoyable.

And, though it’s small, Mitchell says the game makes a difference. Similarly, Clark says a hug and saying “I love you” also makes a difference for both at-risk youth and adults who have already dipped into delinquent behavior.

“Do you know how many say ‘It’s been a long time since someone said they love me?'” Clark asked. “Sometimes that’s all it takes.”