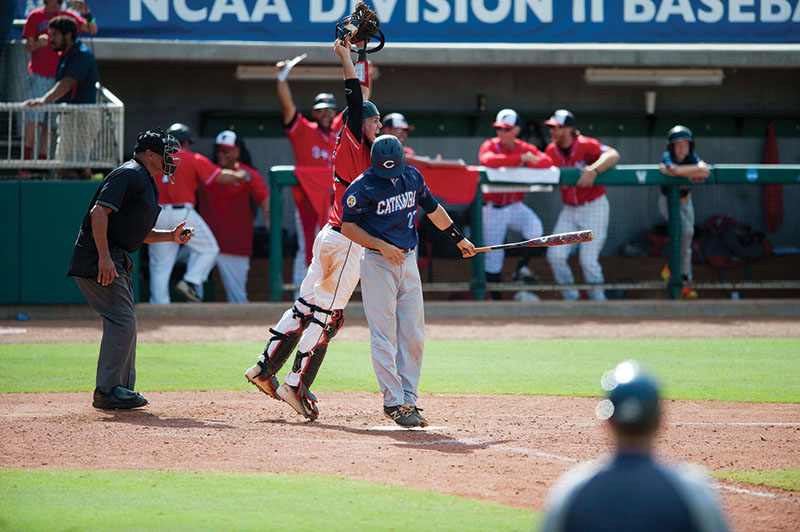 JON C. LAKEY / SALISBURY POST Tampa catcher Nick Tindall celebrates the final out as Catawba’s Craig Brooks (22) walks back to the dugout after the NCAA Division-II National Championship in Cary. Brooks struck out, and Catawba fell 3-1 to Tampa at the USA Baseball National Training Complex on Saturday. The Indians completed their season as the NCAA Division II national runner-up.

Spring Training scores don’t mean all that much, but it’s still an indication of just how stout a Division II program Tampa has.

Tampa secured another national championship — its seventh — by beating Catawba 3-1 on Saturday afternoon at Cary’s Coleman Field in front of 2,452 fans, most of them rooting for the Indians.

“We were glad when Catawba beat Pomona,” said Tampa shortstop Giovanny Alfonzo, who hit the grand slam that beat the Phillies. “We wanted to play in front of a crowd, and we knew Catawba would bring a crowd.”

Tampa (43-13) went through the double-elimination tournament unbeaten, while Catawba, playing in its first national championship game in any sport, went 3-2 in Cary.

“I don’t know that it’s sunk in yet, but second in the nation for a school our size is a great accomplishment,” Catawba coach Jim Gantt said. “Just unbelievable.”

Catawba (47-15) played errorless defense and got determined pitching from Sean Grant, a southpaw who was outstanding in all three of his postseason starts. Tampa had five lefty batters — four in a row — and they didn’t do much against Grant.

“Sean was a good matchup against their lineup,” Gantt said.

Grant got a lot of help from center fielder Blake Houston. In the final game of his career, Houston smashed into fence in the second and fourth innings while making acrobatic, breathtaking catches.

“That’s what Blake does,” Gantt said. “We play in a small ballpark, so he doesn’t get to make some of the plays he had a chance to make here. He’s got the speed to make those plays.”

The star for Tampa was left-handed pitcher Michael Calkins, who was named Most Outstanding Player. He tossed a complete game and held the Indians to four hits. He wasn’t overpowering, but he moved the ball in and out and had impeccable control. His only walk was an intentional pass to Catawba slugger Will Albertson.

“He threw a lot of changeups,” Albertson said. “A lot of times, we just got ourselves out.”

Catawba scored in the third inning. Luke Setzer — batting ninth — singled with one out and raced around the bases when Dylan Richardson whacked a fastball hard to left field and Tampa’s Brett Jones couldn’t make a diving catch.

Richardson made it to second base but stayed there. It was an easy decision for Tampa coach Joe Urso to intentionally walk Albertson with a base open, with a lefty on the mound, and with lefty swinger Malachi Hanes hitting behind Albertson. Calkins struck out Hanes to end the inning.

The key swing for Tampa came from Nick Tindall, the 6-foot-4, right-handed hitting catcher who was batting in the No. 6 hole.

“He’s batted ninth some here, but with a lefty pitching for Catawba, we moved him up into the thick of things,” Urso said.

With two out and two on in the fourth, Tindall, who was drafted by the Minnesota Twins coming out of high school, tripled down the right-field line on a 1-2 pitch to put the Spartans ahead 2-1.

“I missed my spot by a couple of inches,” Grant said. “We wanted that pitch more outside.”

Calkins took it from there. Catawba went down 1-2-3 in the fifth and could’t build on an Albertson single in the sixth.

“We battled, and we made defensive plays,” Gantt said. “But we just couldn’t do anything with their pitcher. We needed them to make a miscue, and they never did.”

After the Indians went down 1-2-3 in the seventh, Tampa scored in the bottom of the inning on a two-out single by Casey Scoggins to push the lead to 3-1.

“Catawba was awesome today,” Urso said. “We were a little luckier and we got a couple of key hits.”

Alfonzo’s glove took over in the eighth. He made a big-league backhand play in the hole on a ball that Setzer rapped. That was huge because it prevented Albertson from getting to the plate as the tying run.

Calkins owned the ninth, getting Albertson on a routine flyball, Bryce Fowler on a liner to first and Craig Brooks on a strikeout.

Then it was time for a Tampa dogpile, and time for the Indians to accept the runner-up trophy. The Indians will be good again next season, but Brooks, Houston, catcher T.J. Wharton and reliever Ryan McClintock were special players.

“This season meant the world to me,” Gantt said. “It’s hard to see it end, but the sun will come up tomorrow.”