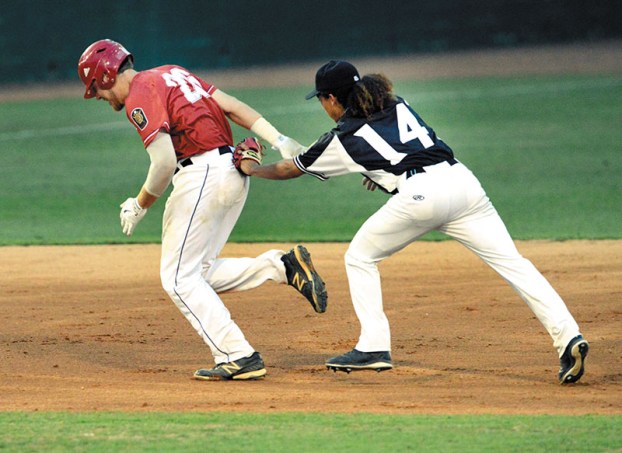 Photo by Wayne Hinshaw / For the Salisbury Post Rowan’s Heath Mitchem (26) is tagged out by Randolph County’s Tristen Marsh (14) in a run down between second and third base.

SALISBURY — Leave it to Randolph County to crash the opening-night party at Newman Park.

Visiting Post 45 spoiled Rowan County’s American Legion season debut Friday night with a molar-grinding 6-5 victory. Half of the guests’ runs were unearned due to a sixth-inning error and the game-winner was forced home when slugger Kirby Lambert was hit with an 0-2 pitch with two outs in the ninth inning.

“Some base-running mistakes and a misplayed bunt,” assistant coach Seth Graham said. “That was the ballgame.”

It was until the top of the ninth. Rowan never led but erased a 5-2 deficit and seemed positioned to make it a grand opening when losing pitcher Noah Jarrett retired Randolph’s leadoff batter in the last inning.

Instead, Rowan bogeyed the final hole and sent its mid-sized crowd home disappointed. Randolph (4-2) ignited its winning rally when No. 8 hitter Brady Wright steered a sharp, ground-ball single into left field. Tristan Marsh followed with a soft-serve base hit to left-center. When leadoff man Reece Daniel was hit by a pitch to load the bases with one out, Jarrett was in trouble.

“We saw a lot of good things,” Rowan first-baseman Heath Mitchem said after going 3-for-5 with a double and two RBIs. “We were hoping to see more. We want to see what people can do in tough spots.”

Jarrett — who retired the first seven batters he faced — struck out Clay Richardson, the last man he saw, on a 3-2 offspeed pitch for the second out. Graham then summoned Corey Fries from the bullpen and the right-hander quickly got ahead of the lefty-swinging Lambert (2-for-3 with two doubles and two RBIs).

His 0-2 delivery came in swift and hard and hit Lambert near his belt, plating the go-ahead run.

“He probably just got it a little more in than he wanted to,” said winning coach Ronnie Pugh. “He had a good idea, and it was a good pitch. But it got away from him.”

Graham chose to applaud Fries attempt to push Lambert off the plate.

“Corey’s ball tends to cut in a little bit on its own,” he said. “In hindsight, it’s tough what happened.”

Camouflaged in the commotion was the sturdiness of winning pitcher Cameron Reid. Still a junior at Asheboro High School, he provided scoreless relief over the final 2-1/3 innings. He allowed only one baserunner — Michael Caldwell, who singled in the ninth and was erased on a game-ending double play.

“More than likely he was headed to our junior team,” Pugh said. “But he’s pitched himself onto our staff. He throws strikes and that keeps him out of trouble.”

Rowan had little trouble against Randolph’s other two pitchers. It finished with 11 hits, including three each by Mitchem and Juan Garcia (3-for-3 with a sac fly) and two by Caldwell.

“That’s what’s disappointing,” Garcia said. “We saw the ball so well and got all those hits.”

The misplayed bunt Graham referenced came with the score tied 2-2 in the top of the sixth. With runners at first and second Jaxson Snider bunted toward the mound and Sawyer Strickland — in relief of starter Hunter Shepherd — fired a throw past Garcia at third base, allowing both runners to score. Afterward both Garcia and Graham reasoned the play should have gone to first base.

“That’s fine though,” Graham said. “The plus is we got to see a lot of guys play. We have to cut nine of them before the first league game. But this team, it’ll get better before it gets worse.”