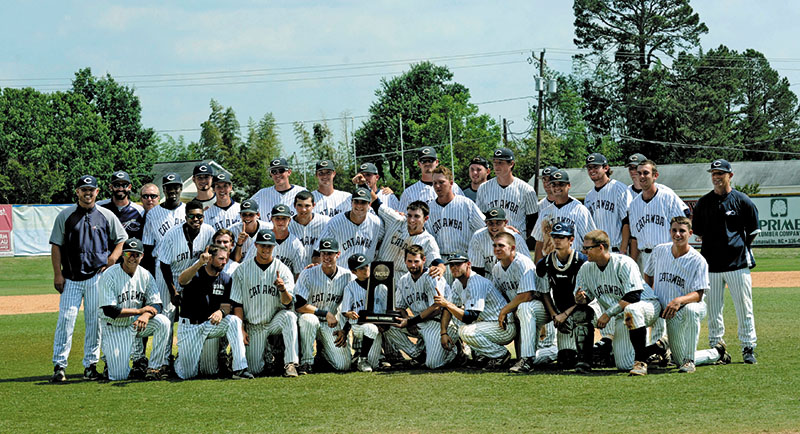 A fastball by Brooks landed in the mitt of Albertson to finally end Friday’s marathon game in the Division II Championships, and Catawba beat Cal Poly Pomona 9-6, one day after being destroyed by the same team 11-2.

“It happens in baseball,” Catawba center fielder Blake Houston said. “We beat Belmont Abbey 27-7 this year, and then they beat us the next day. We knew we could do something like that.”

While Cal Poly Pomona made the long trip home, Catawba, 3-1 in the tournament, advanced to the final day of the championship for the first time.

“It’s pretty crazy when you think about Catawba playing for a national championship,” Houston said.
It’s still an uphill battle. Catawba will have to beat the University of Tampa twice on Saturday, with the first game starting at 3 p.m., to claim the title. Tampa (42-13) will be seeking the program’s seventh national championship.

“We got embarrassed by Cal Poly Thursday, but it wasn’t hard at all to flush that one because it was over by the fifth inning, and we just moved on,” Catawba coach Jim Gantt said. “We were coming off a three-day layoff and we weren’t sharp, and Cal Poly is good enough to make you look really rusty.”

Cal Poly Pomona played a near-perfect game in beating Catawba’s brains outs Thursday but looked exhausted Friday. The Broncos (46-17) made four errors and a baserunning blunder and five hurlers couldn’t contain the Indians’ offense. Catawba had 15 hits, with Houston accounting for four, Kyle Smith and Dylan Richardson getting three each, and Brooks and Albertson getting two apiece.

“It was our fifth game in six days,” CPP coach Randy Betton said. “But it’s not like we folded. Catawba just grinded us out.”

The grinding took 3 hours, 42 minutes, an extraordinarily long game for two of the nation’s best. But neither team was conceding a single at-bat — and the strike zone was tight.

Starting pitcher Russ Weiker gave Catawba a chance by surviving a two-run homer in the third and lasting into the fifth. Ryan McClintock got the third out in the fifth, breezed through the sixth and picked up the win.

When McClintock ran into trouble in the seventh, lefty Michael Elwell got three eventful outs. Brooks took care of the eighth and ninth with serious heat. There were five strikeouts.

The visiting team, Catawba rallied three times. Down 2-0, the Indians tied it 2-2 in the third. Down 4-2, they tied it 4-all in the fourth. Down 6-5 in the sixth, Catawba seized the lead for good when Brooks hammered a two-out, two-run single to center field. Malachi Hanes, flying around from second base, slid home on a close play with the go-ahead run.

“We got behind, but we always fought back,” Gantt said. “That’s been the story of this team. They don’t always do it the easy way, but they usually do find a way.”

Brooks did it all on Friday — with his glove, legs, arm and bat — and was instrumental in Catawba (47-14) tying the school record for victories.

After hits by Kyle Smith and Bryce Fowler set the table, Houston’s run-scoring double to left-center and Hanes’ line-drive sac fly tied the game at 2-all and sent the message that the Indians were ready for a dogfight.

“I’ve been anxious at the plate and pulling the ball too much,” Houston said. “I was focused on staying on the ball better.”

Houston had a two-out hit to key Catawba’s two-run fourth for a 4-all tie. Smith’s RBI single provided a 5-4 Catawba lead in the fifth.

A two-out error hurt Weiker and helped CPP take a 6-5 lead in the bottom of fifth, but Catawba answered immediately in a pressure-packed sixth. Brooks, whose productive bat is overshadowed by the lightning in his right arm, ripped his biggest hit of the season for a 7-6 lead and all kinds of momentum.

Albertson’s RBI single in the seventh bumped the lead to 8-6.

The bottom of the seventh removed the wind from CPP’s sails. Mike Philip’s single and Ryan Webberley’s double knocked out McClintock. Elwell relieved McClintock, and his 0-2 pitch to Brennen Salgado was lashed hard. Fortunately, Brooks, the third baseman, snagged the liner inches from the ground.

“That one was smoked,” Brooks said.

It was the break Catawba needed. Then when Nicholas Bruno sent a flyball to medium right field, Luke Setzer caught it and came up throwing. Philip came well down the third-base line before applying the brakes, and Webberley, who thought Philip was headed for the plate, was caught halfway between second and third. Richardson, the shortstop, handled the ensuing rundown perfectly, and Catawba was out of an inning that had started dangerously.

Brooks had a moment of worry in the eighth whem CPP star Kyle Garlick crushed a pitch to deep center. Houston chased it down nearly 400 feet from home plate.

“It was a little bit of a shock when he hit that ball,” Brooks said. “But then I saw Blake easing up, and I knew he had it.”

Setzer walked to start the Catawba ninth and scored when Richardson singled and the ball was misplayed. Setzer’s run made it 9-6. Richardson circled the bases easily and would’ve made the score 10-6, but he failed to touch third base on his all-out sprint.

“That ball’s at the left-field fence and we miss third base,” Gantt said, managing a smile. “I’ve never seen anything like it, but we can laugh about it now.”

CPP had two baserunners against Brooks in the ninth on a walk and a bloop, but he calmly ended the game with another blazing strikeout. Brooks has closed all three Catawba wins in the tournament.

It was enough for the Indians to play for a national championship.