The keys of life: Piano tuner West has perfect pitch 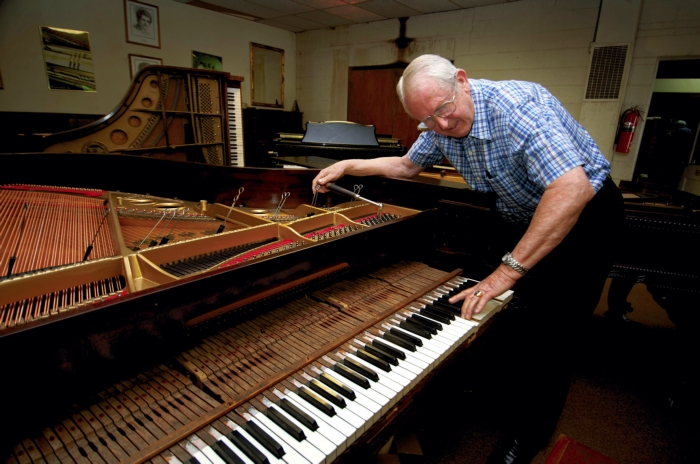 JON C. LAKEY / SALISBURY POST Roy West plays a chord on the keys, listens to the sound and makes adjustments on the strings. West, 80, has spent a life time tuning pianos. West does contract work Kluttz Piano and can tune all the strings on a piano in about an hour. Wednesday, May 27, 2015, in Granite Quarry, N.C.

ROCKWELL — You see it in the way Roy West cocks his head and points his left ear toward the piano. It’s there as the toothpick rolls back and forth in his mouth. His strong right hand gives it away, when he twists the tuning lever, then eases back to the spot he knows is right.

This is confidence, and when it comes to tuning pianos, West has it. He wakes up in the morning knowing the world is out of tune, and with every piano he works on the rest of day, he restores some resonance and harmony to the order of things.

“I got lucky,” he says, working a few minutes on a Steinway in the showroom of Kluttz Piano Co. “I managed  to get my intervals locked up in this first octave. What I’ve just done, it would take a new man an hour to do.”

Spend any time with West, and you might think you’re talking to a physics professor. The conversations are sprinkled with talk about vibrations per second, friction, tensile strength, absorption, Doppler effect and torque. His dented tool box weighs about 25 pounds and carries specialized hammers and pliers that would hold little value to most people. He estimates it would cost him $1,000 to replace.

Though he just turned 80 and has been tuning pianos for close to 60 years, West is more renaissance man than Ancient Mariner. He’s not a cuddly codger practicing a long-lost art. Rather, he’s an energetic, opinionated, quick-witted professional who used his business savvy to forge a decent living for his family.

When he’s done tuning a piano, West sits down and tests it out by playing a classical piece — Rachmaninoff is his favorite — or show tunes from “My Fair Lady,” such as “Wouldn’t It Be Loverly,” or “On the Street Where You Live.”

West laughs, remembering an old adage among piano tuners, who regularly find themselves in churches: If a piano can play a Baptist hymn, it can play anything.

At his home in Lexington, West plays — and tunes almost weekly — his nine-foot concert grand piano, a 1905 Bush & Gerts model. An accomplished player who used to entertain visitors to the furniture market in High Point, West has digitized 10,000 pieces of music onto his iPad, and he relies on a Blue Tooth pedal to turn the pages as he plays.

He is a 33rd degree Mason obsessed with the history behind the fraternal organization. He also has been a devoted ham operator since 1962.

West’s piano-tuning jobs take him regularly into Rowan, Cabarrus and Mecklenburg counties. He “retired” in 2000 so he could cut back to 50 hours a week. He still puts 30,000 miles a year on his Buick LeSabre, and since 1998, Kluttz Piano has relied on West for all of its local piano-tuning jobs.

Today, West works for Kluttz as a private contractor, besides calling on his own regular and new customers. When he’s not at Kluttz, he’s tuning pianos in private homes, churches and schools. At last count, West had some 5,600 customers in his database, which he guards like Fort Knox.

West says the pianos he tunes are like people. They each have a different personality, and he likes to play and listen to them for several minutes before he starts his work. West will bring out a frequency counter, giving him a base read on the beats or waves, but from then on he relies mostly on his trained ears.

West has perfect pitch. He hits the keys and asks whether you hear the waves or beats and the difference in pitches. He often is answered with blank expressions.

While a new generation in his business depends more on electronic tuners, those devices can’t tell you when the blend is the way it should be for each piano, West says.

When he tunes a piano, West works from the center out for each note on the scale, using mutes (pieces of rubber) to block off strings he doesn’t want to hear. He isolates notes or whole octaves and describes his approach as ironing out an imaginary wrinkle from the center to the left and right ends of the keyboard.

“Now I’m giving away my trade secrets,” he says. “Every tuner develops his own methods for speed. This is the one that works for me.”

Roy West grew up in Alta Vista, Va. When he was 8 or 9, his mother decided he should take piano lessons. “It wasn’t one of my favorite things, but I toughed it out,” West says.

Over the years, he became equally interested in the mechanics behind the piano, and when he became a piano teacher himself much later in life, West tried to include in his instruction an understanding of the instrument.

“I don’t see many teachers today teaching music theory,” he adds. “Many today are over-priced baby-sitters.”

In Virginia, West’s father worked for the Lane Co., making cedar chests. The family moved to Lexington in 1951, when West was a junior in high school and his dad went to work for the new Link-Taylor furniture plant.

West graduated from Welcome High School in 1952, then because of his vocal talents — friends sometimes accused him of sounding like a Baptist preacher — he landed a job as a radio announcer with WBUY in Lexington. He became a newscaster, ripping off Associated Press reports from the teletype machine and reading it cold on the air five minutes before each hour.

During that time, West also was playing piano for a gospel quartet. He started carrying tools with him, because every time the quartet performed at a church, West found the piano way out of tune.

West decided there might be a future for him in piano tuning. He started studying on his own, reading every textbook and manual he could find, before contacting Robert Cline in Fort Lauderdale, Fla. West had seen Cline’s name in a trade magazine, talked to him by telephone, and Cline invited him down to his “school” for an extended stay.

Cline, who was legally blind, later would ask West to run his shop, but West had other plans. He spent six months with Cline, learning nuances of the trade before returning to Lexington. He went to work at the furniture plant, while tuning pianos on the side.

With every piano West tuned, he picked up something new. Homer Craver, a local violinist and longtime tuner, also passed on some important tidbits for him.

“He, too, understood the balances of the intervals,” West says. “… You can’t stop learning. You learn until the day you die.”

In building his client base for piano tuning, West used index cards, which he kept in tin boxes. Each time he had 500 cards to a box, he started a new one. He eventually had five boxes full of customers, the start of a database he would transfer to computer in 1985.

After 15 years, West quit the furniture plant and started his own shop, which included piano restoration work.

“I had some lean years, as everyone does starting out,” he says, “but I managed to make ends meet.”

When West went to work for Kluttz Piano full time in 1998, he already was 65. He closed his own shop in Lexington because he didn’t think it was ethical to be competing.

Jonathan Kluttz says using West as a contractor today helps the company provide service to customers at a greatly reduced rate. “He rides with me a lot,” Kluttz says. “I can take Roy and bribe him with food.”

When West hangs out at the piano company, there’s constant ribbing back and forth with the Kluttz brothers. When Jonathan is reminded West has been working with his company since 1998, Kluttz says, “It feels like 1968.”

West ticks off the names of the seven top piano brands he has tuned through the years and claims the best in his book, for its design and the way it was built, was Mason and Hamlin models.

The oldest piano he has ever tuned was an 1850 square Steinway.

West and his wife, Nancy, have been married 62 years. They had three children, two girls and a boy. The Wests’ son died a few years back of a brain tumor.

When West visits one of his daughters in Columbia, S.C., he often is asked to tune some of the pianos there, so he takes his toolbox.

West depends, of course, on repeat business, but he doesn’t shy away from new customers. He recently tuned the seven pianos Salisbury Symphony has placed in front of downtown stores and says he keeps as busy as he wants to be.

He recommends that clients with pianos at their private residences have them tuned at least every six months. Churches often schedule him every quarter.

Customers often assume a tuning should last for years at time. They don’t consider the changes in environment and how the properties of metal and wood in a piano are constantly in flux, affecting the sound of the instrument.

“Many people don’t understand — it doesn’t stay there,” West says. “The tuner can’t affect the laws of physics.”

West says the youngest piano tuner he knows of today is in his late 40s.

But he recognizes one of the bigger drawbacks stopping young men or women from getting into this work.

“A new tuner spends four hours to do what I can do in an hour,” West says. “It’s the law of economics. He can’t charge four times what I charge.”

It depends on the piano and work involved, but a routine tuning by West costs about $100. Piano tuners with West’s kind of experience and training are definitely a fading breed, but he contends it always has been a specialized profession.

“It takes almost an inherent interest in it and a dedication to be professional at it,” he says.

West has no plans for stopping anytime soon and says, “I’ll do it until my toes turn up.”

The world, you see, is still too much out of tune.