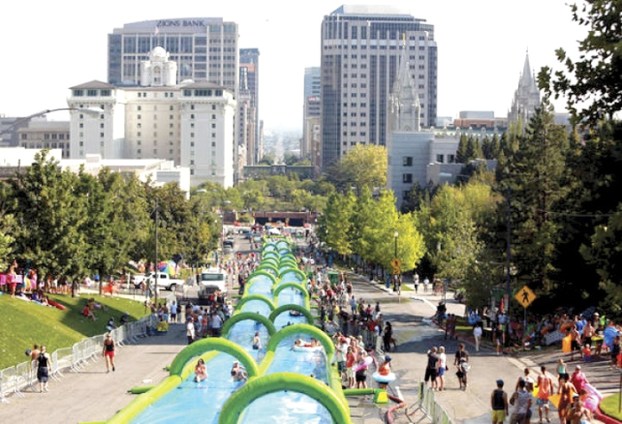 Slide the City, a 1,000-foot-long water slide, is coming to downtown Salisbury in late August.

Salisbury is set to get wet and wild in late August.

A 1,000-foot water slide will be set up on South Main Street downtown when Slide the City comes to Salisbury for the day on Aug. 29. The event runs from 11 a.m. to 6 p.m.

Slide the City is an event company that started in Salt Lake City, Utah, last year. The idea is simple, get a huge water slide that runs down the middle of the street. Then get thousands of people to come out and use it.

Downtown Salisbury Inc. reached out to Slide the City about coming to Salisbury, and the two organizations will be partnering to put on the event.

The slide will be on South Main Street and run from East Fisher Street to Military Avenue.

Brad Behle, an event director with Slide the City, said they typically get 4,000 to 5,000 people at each event.

Paula Bohland, executive director of Downtown Salisbury Inc., said the event is a fun way to bring people and attention to downtown Salisbury. She said it will bring a significant amount of people from out of town to the area.

“They would not have come if they did not feel like they could get the people they need,” she said about Slide the City choosing Salisbury.

Once registration opens, people can register online at www.slidethecity.com. Prices range from $15 to $60 depending on when someone registers and how many times they want to slide: once, three times or an unlimited number.

About 70 volunteers will be needed to help out throughout the day. They will work in shifts, and volunteers will get a free pass to use the slide. People who want to volunteer can contact Downtown Salisbury Inc. at 704-637-7814 — more information will be on the website, www.downtownsalisburync.com, Saturday.

All volunteers need to be 16 years or older and able to lift at least 20 pounds.

Slide the City will be in Raleigh on Saturday. The event is sold out.

Slide the City will need a permit from the city for the event, which uses 12,000 to 20,000 gallons of water in a day, according to Slide the City’s website.

“At the end of the event, the water used in the slide will be treated and then recycled back into the community. Methods of recycling include local reclamation centers, watering city parks, and other places dependent upon direction from city officials,” the site says.

By David Purtell david.purtell@salisburypost.com The man in charge of Salisbury’s Code Enforcement Division is no longer with the city. Chris... read more