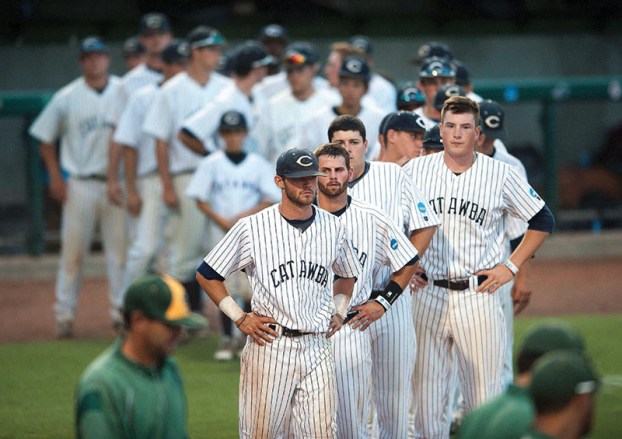 Catawba Baseball: Indians down but not out

CARY — Catawba’s 11-2 loss to Cal Poly Pomona on Thursday in the Division II Championships was as ugly as it sounds. The Indians came out flat, and they got flattened by the Broncos, who out-pitched, out-hit and out-fielded the Indians.

“The best thing about that game is that it’s over,” said Catawba coach Jim Gantt, as he opened his postgame press conference.

The list of Catawba positives was short. Freshman Clay Young threw four shutout innings that, unfortunately, came long after the game was decided, and Malachi Hanes launched a two-run, pinch-hit homer with Bryce Fowler on base in the eighth that also fell into the too-little, too-late category.

Sounds like a simple formula, but the Indians had close to zero luck against Cal Poly Pomona starter Max Bethell, a lefty who threatened to pitch a no-hitter. Catawba didn’t get a baserunner until Will Albertson walked in the fourth, and the Indians (46-14) didn’t manage a base hit until Albertson singled to center leading off the seventh.

“Blake Houston hit two balls hard and we had quite a few loud outs early in the game on well-hit balls,” Albertson said. “But you have to give credit where it’s due. Their pitcher was tough. His changeup was very good. He had us off-balance a lot.”

Albertson, T.J. Wharton and Craig Brooks all hammered balls down the left-field line that were inches from being doubles, but it was that kind of day for the Indians.

The teams waited out a rain delay of an hour before getting under way.

A running catch in left field by Austin Stilley in the first inning and a 6-4-3 double play in the second inning kept the game scoreless for two frames, but Cal Poly Pomona’s five-run third inning proved decisive and demoralizing.

Catawba starter Shaefer Shepard walked No. 9 hitter Jacob Bernardy to start the third and Kyle Garlick, who had flirted with a homer on Shepard’s first pitch of the game, drilled a single to put two on. When Christian Kelley bunted toward the third-base line, it turned into a disaster for the Indians. Third baseman Craig Brooks had charged, and Shaefer threw wildly past him as Brooks tried to retreat to the bag.

The ball headed down the left-field line, as two runs scampered home.

“Getting an out (at first) there would’ve been big, but we threw the bunt away,” Gantt said. “It snowballed from there.”

Shepard (11-4), a rock for the Indians all season, didn’t make it through the third, and the Broncos kept hitting balls hard against relievers Avery Bowles, Ryan Kahny and Connor Johnson.

“We missed some spots, and we just got into a lot of bad counts against a good-hitting team,” said Albertson, Catawba’s catcher. “You get behind those guys 2-0 and 2-1, and they’ll jump on it.”

“Young got ahead of hitters,” Gantt said. “And when he missed, he didn’t miss in the middle of the plate.”

Defensively, it was a day of near-misses for Catawba. Houston came close on two diving catches in center field on highlight-reel plays that he sometimes makes. Right fielder Luke Setzer unleashed a strong throw that would’ve had a runner out at third, but the ball struck the runner in the back before it reached its destination.

But it could’ve been worse. Houston and shortstop Dylan Richardson narrowly missed a head-on collision pursuing a pop fly. Houston’s foot hit Richardson’s head as they passed. Houston caught the ball, and after an initial scare, Richardson appeared to be OK.

“He knew where he was,” Gantt said.

Catawba plays Cal Poly Pomona again Friday in Cary at 3 p.m. The winner of that game advances to play Tampa, still unbeaten in the tournament, on Saturday. Catawba and Cal Poly Pomona have a loss apiece and either Catawba or Cal Poly Pomona would have to beat Tampa twice to win the championship.

Catawba will send lefty Russ Weiker to the mound Friday. CPP is expected to go with Michael Koval.