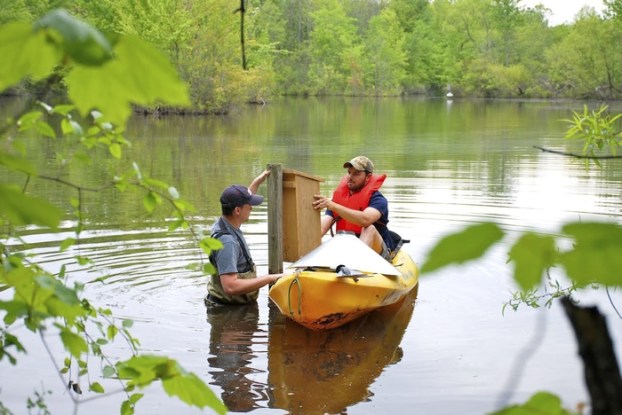 Balyn Krout spent his spring semester giving a home to the wood duck population in the Fred Stanback, Jr. Ecological Preserve on the Catawba College campus. Krout, an environmental studies major and senior at Catawba, worked on the project for his internship with the Center for the Environment.

Wood ducks are his passion. “I have a natural interest in water fowl and water fowl conservation,” Krout says.

A lifelong hunter and fisherman, Krout says he became interested in waterfowl when he went duck hunting his freshman year of high school. Contrary to what some may think, hunters have to be involved in conservation work if they want to ensure that species stay healthy and continue to flourish.

“It’s not about how much you get out of it; it’s what you put back in,” he explains.

Krout noticed that a lot of the wood duck boxes in the preserve were in need of repair, so he decided to fix them. He went through the preserve and GPS-tracked all of the old boxes and took them down. With a goal of being frugal, he replaced crumbling, old boxes with new ones that had been donated by an Eagle Scout, and if parts of the old were still in good condition, he refurbished them.

He also made the decision to move many of the boxes. Wood ducks typically nest in hollow trees in the wild within a mile radius of water, and Krout says he tried to figure what the wood duck population at Catawba liked. He noticed that the boxes directly above water or within 10 yards of it were used most often and adjusted the locations of many boxes to suit the birds.

He hopes that wood duck numbers in the preserve will flourish, and that new birds will decide to make the area their home. Krout has also mapped the locations of all the boxes for visitors to the preserve, or in case someone comes after him who wants to continue the project or change the location of the boxes.

“I just kind of went with my heart on it,” Krout said.