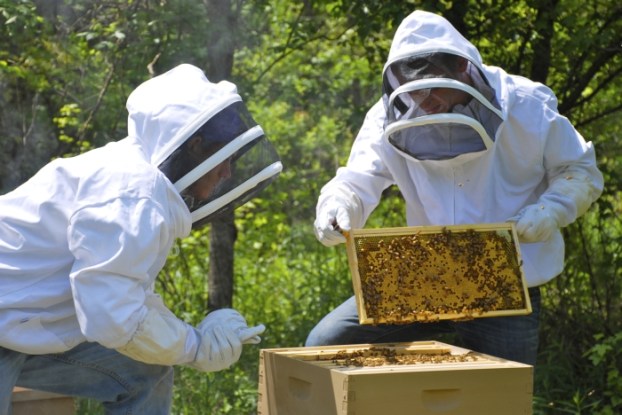 Schlaudt became interested in beekeeping after learning about the decline of bee pollinators in class. He wanted to bolster the local population and provide a space for education about bees. Many people are scared of bees and being stung, Schlaudt explained, but it’s the result of misunderstanding.

“They just don’t understand bees and how gentle they normally are,” he said.

Honeybees are reluctant to sting and are only aggressive when they’re on the defense — when they’ve been swatted or when something is invading the hive.

To prepare, Schlaudt took beekeeping classes at Davie County Community College starting in January 2015. In March, he and the other Stewards set up the hives. The bees themselves came from local Salisbury hives, and have settled in nicely. Schlaudt says he’s teaching the other Stewards the beekeeping skills he’s learned, and they all work together to make sure the bees are happy and healthy.

And the bees are already producing honey. The Stewards don’t know if the hives will make much extra honey this year — each hive needs about 45 pounds of honey in order to survive the winter. But next year, the bees should swarm, and Schlaudt is hopeful that they’ll have a total of seven hives. That means a lot of honey. The Stewards have lots of plans for it, but nothing definite yet. They do know that, somehow, they want to give back to the community — either by donating funds or the honey itself.

While Schlaudt still has two years to go at Catawba, he hopes that in that time he’ll find a successor — someone to whom he can pass along his beekeeping knowledge. And he hopes that through this project people will come to appreciate the importance of honeybees and other pollinators and the hard work they do.

By Rebecca Rider Center for the Environment Balyn Krout spent his spring semester giving a home to the wood duck... read more