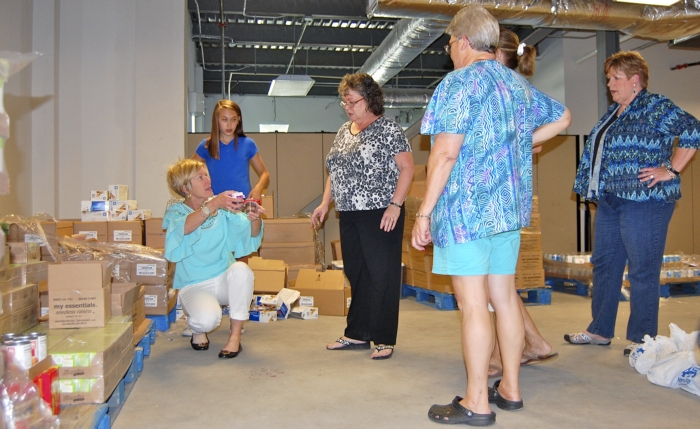 A few years ago, Carol Herndon retired from her corporate job at Food Lion to spend more time with her family, but after a few years of peace and quiet, she’s on to her next challenge as the executive director of Food for Thought.

Food for Thought is an organization that provides food for more than 300 hungry students across 16 different schools in the Rowan-Salisbury School System.

When she retired, Herndon said, she was exhausted.

“Both of my children were in very important stages of their lives,” she said, adding that her son, Carson, was heading to college and her daughter, Bailey, was starting middle school.

“I wanted to be more available to them,” she said.

In her retirement, Herndon felt compelled to get involved and give back to her community.

“I had been so blessed in so many different ways,” she said.

So, she got involved in her church and other community organizations, including the Salisbury Community Foundation board, Easter Seals UCP North Carolina, the Rowan-Cabarrus Community College Foundation, the Community Care Clinic and Crosby Scholars.

“I had started to get the itch to work again last fall,” Herndon said, adding that she knew she didn’t want to go back into the corporate world.

She threw out some feelers, and after a few months, she got three emails from very important people in her life over a span of two days telling her that she should apply for the executive director position at Food for Thought.

They said it would be would be a “perfect match,” she said.

Herndon applied and was hired. She started March 16.

“This is absolutely a labor of love,” she said. “I enjoy it.”

Herndon added that at the end of each day, she knows the work she did has had a positive impact on children across Rowan County.

“I cannot tolerate the thought of a hungry child,” she said. “My ultimate goal is to eliminate hunger in children that are within our school system.”

Herndon is passionate about serving “every deserving child,” she said.

In the long run, she wants to partner with similar organizations to eliminate hunger altogether in Rowan County.

“There’s a lot of power in partnership,” she said.

Herndon’s experience in the corporate world has given her a unique set of skills to help grow and develop Food for Thought.

She’s used her organizational and public speaking skills as she’s developed processes “that will allow us to build a platform for accelerated growth,” she said

“I’ve been able to tap into my leadership skills,” she added.

Herndon’s had to learn to adjust from corporate culture to the nonprofit world.

“I have very high expectations of myself,” she said, adding that by the third day on the job, she had a list of 90 things she wanted to move forward with. But unlike Delhaize America, she doesn’t have the financial or human power to move on all those things at one time.

She’s had to “reset and prioritize” her expectations, Herndon said.

Food for Thought purchases its food from Food Lion at a discount, and volunteers help assemble bags of food for each student every week. Herndon is the organization’s only paid employee.