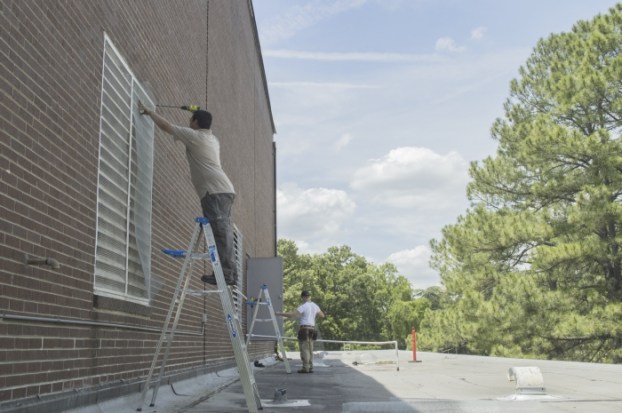 Josh Bergeron / Salisbury Post - Representatives of the company Animal Control Experts work to seal off a vent that leads into Keppel Auditorium. The company has been contracted by Catawba College to remove a bee infestation.

First, the relentless buzz forced a relocation of the school’s graduation. Then, local high schools moved graduation ceremonies out of Keppel Auditorium. And Pops at the Post, which takes place June 6, is looking for another venue to use in case of rain.

Now, Catawba College is calling in outside help to rid the auditorium of a bee infestation that’s lasted multiple weeks. The school has contracted with Animal Control Experts LLC — a company with offices in Charlotte, Winston-Salem and Greensboro — to help remove swarms of bees from the Robertson College Community Center, which includes Keppel Auditorium, according to an email from Catawba spokeswoman Tonia Black-Gold.

Black-Gold said the school has already contracted with local beekeepers to collect three swarms — each including thousands of honeybees. Animal Control Experts will route the bees out of the building and into bait boxes, then seal up the building to prevent the bees from returning. Black-Gold said the procedure would cost the school $30,000. It’s the same amount of money as the lethal option, she said.

“Our goal was to do things the right, proper and most sustainable way,” Lewis said.

The work by Animal Control Experts is expected to take two to three weeks. A part of the work will be sealing the top of the Robertson College Community Center. After the company wraps up its work, Black-Gold said the school would receive a two-year guarantee that the bees wouldn’t return.

The infestation, in addition to already canceled plans, will also require the cancellations of several dance recitals and a benefit dinner for Novant Health.

Tuesday was the first workday of Animal Control Experts’ job. Representatives of the company were installing mesh on outside vents to prevent the free-flow of bees in and out of the building. The number of bees was considerably diminished when compared with previous swarms.

The company could be finished installing all of its equipment by the end of the week, according to company representatives. A longer period of time will be required for the bees to be trapped in bait boxes and later be removed from Catawba.

“We feel good about our solution and think our public will too,” Black-Gold said. “One small step for us humans, one giant leap for beekind.”

Why does Mean Mug have a cobblestone trophy?

By Mark Wineka mark.wineka@salisburypost.com SALISBURY — If you’ve been to the Mean Mug coffee shop lately, you might have noticed... read more