Why does Mean Mug have a cobblestone trophy? 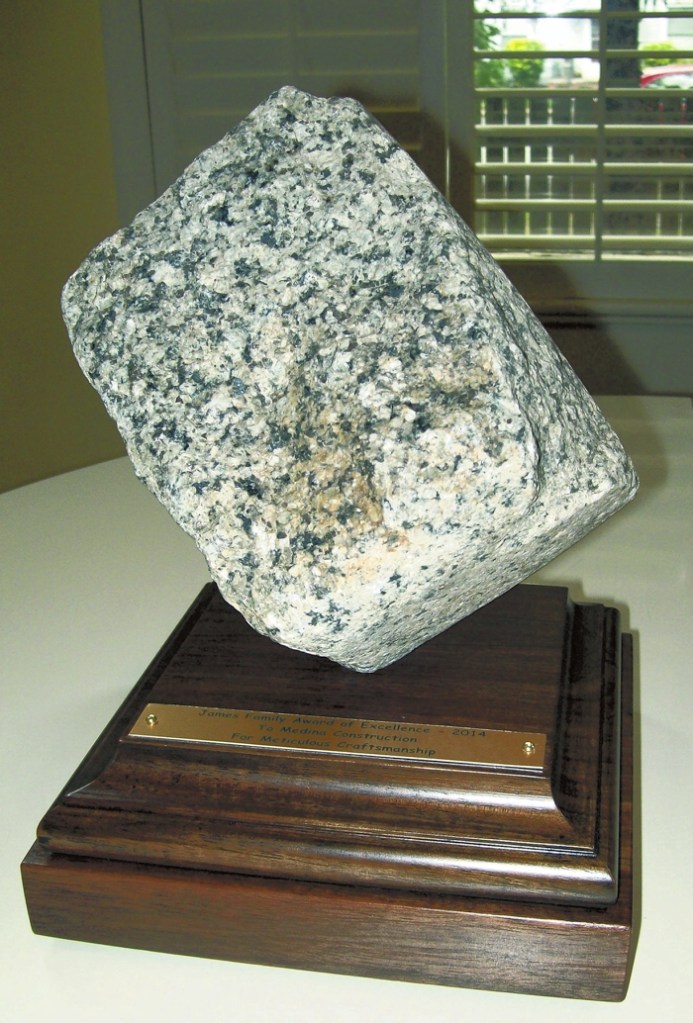 Submitted photo Will and Mary James fashioned a cobblestone left over from their driveway project and presented it as an award to Medina Construction. The award is on display at the Mean Mug coffee shop.

SALISBURY — If you’ve been to the Mean Mug coffee shop lately, you might have noticed a a rock or stone proudly showcased like a trophy for all the patrons to see.

No, owners Evelyn and Rigo Medina are not trying to revive those halcyon days of the Pet Rock. But the cobblestone on display has a back story, and it has to do with Paris, France; cycling; and a driveway Evelyn and Rigo’s other business, Medina Construction, built for Will and Mary James on South Fulton Street.

“We had this idea for a unique award to honor the unique craftsmen on a very unique project,” Mary James says.

James says her husband is a competitive cyclist “from way back,” and many cyclists are familiar with the Paris-Roubaix race, which refers to the two cities the race connects. Much of that race is run over cobblestones, “making it particularly treacherous, especially if it rains,” Mary James says.

Will James has biked over these famous cobblestones, though it was never as part of the official race.

“In any case,” Mary says, “the winner receives not a trophy, but a cobblestone artistically balanced on a plinth.”

A “plinth” is another name for a block at the base of a column, pedestal, statue or trophy.

The Jameses wanted to honor Medina Construction’s work on their antique, reclaimed cobblestone driveway, which was featured in the Salisbury Post last October. When it came time to lay down a new driveway, Will James didn’t want stamped concrete or pavers. He wanted cobblestones like those he had cycled over in France.

The couple needed someone who was a stickler for detail, and they found it in Rigo and Evelyn’s construction business. Since then, Evelyn and Rigo also have opened the Mean Mug coffee shop on South Fulton Street, not far from where the Jameses live.

Laying down the cobblestones, because they were different shapes and sizes, required the whole driveway to be put together like a puzzle. The driveway covered some 2,300 square feet, and the Jameses were thrilled with the result.

Mary James says she and Will grabbed one of the extra cobblestones from the project and took it to Bobby Gaulden at Salisbury Marble & Granite, which is in the cemetery monument business.

Gaulden drilled a hole in the cobblestone at just the right angle, Mary James says. The couple then asked woodworker Tim Isenberg to fashion a plinth and mount the cobblestone.

Mary James relied on the Trophy House to make an inscription for the the mount that says, “The James Family Award of Excellence — 2014 to Medina Construction for Meticulous Craftsmanship.”

Mary James says the award also is a tribute to Alfredo Fabian, who worked on the driveway project.

So that’s the story of the rock at Mean Mug. And to think, you were just looking for coffee.