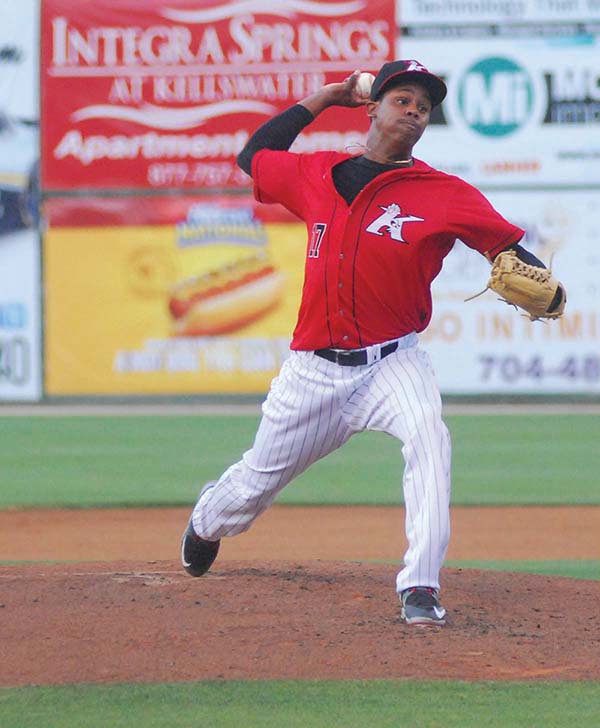 ADAM HOUSTON / SALISBURY POST Kannapolis pitcher Yency Almonte on the mound Tuesday for the Intimidators against the Lexington Legends at CMC-NorthEast Stadium in Kannapolis.

Effective starting pitching by Yency Almonte sparked the Kannapolis Intimidators to a 4-1 win against the Lexington Legends on Tuesday at CMC-NorthEast Stadium.
Almonte (3-2) worked a career-high seven innings and scattered seven hits. The 20-year-old right-hander struck out six and didn’t walk anyone.
It was the third straight strong start for Almonte, who was acquired by the Chicago White Sox in a February trade with the Angels.
Kannapolis’ offense wasn’t exciting, but the Intimidators (21-24) managed to score twice in the first inning. Eddy Alvarez, Christian Stringer and Louie Lechich singled to load the bases with none out. A run scored when Nick Basto grounded into a double play. The second run scored on an error, and Almonte made those early runs stand up.
Almonte was nicked for a run in the first inning before he settled in.
Kannapolis (21-24) led 2-1 most of the way but added a run in the seventh on a run-scoring single by Zach Fisher and tacked on a run in the eighth on a wild pitch.
Brad Salgado was sharp the last two innings after relieving Almonte and earned his third save.
No one had more than one hit for the Legends (19-26).
Attendance was 1,294.
The Intimidators will try to sweep the Legends on Wednesday at 7:05 p.m.