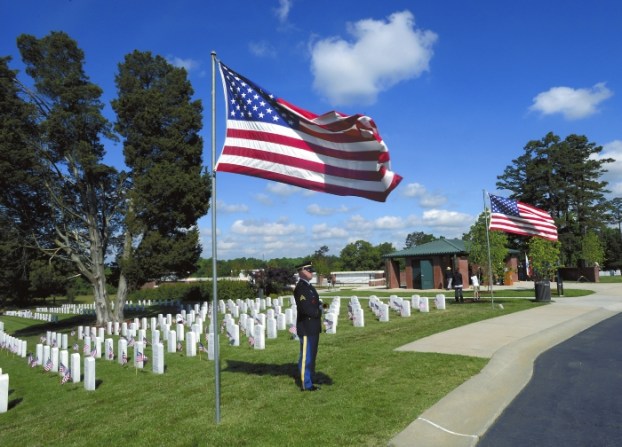 ‘What it has cost us to be free’: Veterans Council hosts Memorial Day service

The Rowan County Veterans Honor Guard fired a volley of fire at the annual Memorial Day Ceremony at the VA Medical Center National Cemetery. photo by Wayne Hinshaw, for the Salisbury Post

The Rowan County Veterans Council hosted its annual Memorial Day tribute on Monday at the National Cemetery next to the W.G. (Bill) Hefner VA Medical Center.

“This event is so important because we are honoring the ones that came before us,” council president David Hand said. Hand is a Vietnam veteran, having served three years in the Army and two years in the National Guard.

Salisbury Mayor Pro Tem Maggie Blackwell delivered a proclamation followed by a moment of silence to remember all of the veterans who made the ultimate sacrifice.

“The sacrifices of the veterans bring security and freedom for us to grow and flourish as a nation,” cemetery director Donald Owens said.

“For those that were there, the war doesn’t end when the last round is fired,” he said. Field was presented with a plaque honoring his service.

“I want to give back to the people who served before me. I am here to serve my country,” Simmons said. “I volunteered every deployment to be where the action was.”

Ninety-seven-year-old Edward Stever of Fayetteville attends the service every year. Stever, a World War II veteran, was married 69 years before his wife passed away. She is buried in the cemetery.

“Memorial Day brings back memories of the brothers I lost. It isn’t a pleasant memory,” he said.

Stever was drafted into the Army Air Force when he was 22 years old.

“It was very difficult to leave a wife and child behind. We could only communicate by mail,” he said. Stever completed 122 missions over the Himalayan Mountains flying in supplies and bombs.

The East Rowan High School JROTC presented the colors. Boy Scouts of America and JROTC units placed flags on each of the approximately 6,000 tombstones in the cemetery.

“Just think of what it has cost us to be free,” Hand said.

The Rowan County Veterans Military Honors Squad conducts graveside services for veterans throughout the year. If services are needed, contact Hand at 704-232-0021.

Across Rowan and Cabarrus, many pause to remember the fallen on Memorial Day

By Hugh Fisher hugh.fisher@salisburypost.com Throughout the day Monday, hundreds of Rowan and Cabarrus citizens took time to remember those who... read more