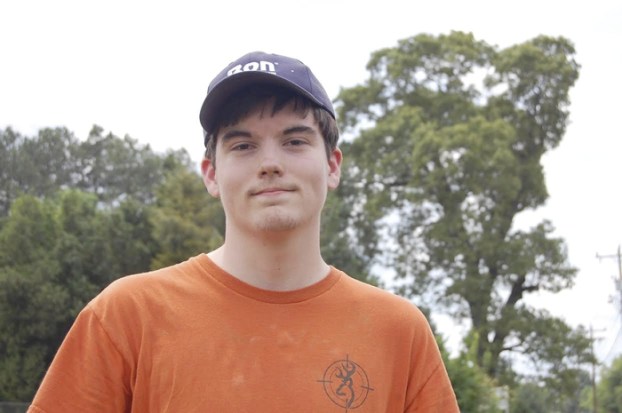 Luke Dutton uses a level to make sure the column he’s building for a sign at the school system’s bus garage is straight. Jeanie Groh/Salisbury Post

For years, people have passed by the Rowan-Salisbury School System’s bus garage without ever knowing it’s there.

So, he reached out to the high school masonry classes to see if anyone would be willing to build the facility a sign.

In class, his students use a practice mortar, made of lime and sand. As senior Luke Dutton prepares to represent North Carolina in the National SkillsUSA competition, Harrington thought it would be a good opportunity for him and his classmates to practice with real mortar.

“I started my freshman year,” Dutton said, adding that he’s competed in four to five competitions a year.

This year, he performed well enough to be the only student from North Carolina to make it to the national SkillsUSA competition, which will be held in June in Louisville, Kentucky.

It is a two-day competition. The first day, Dutton will take a written test, and the second day consists of a six-hour competition where he’ll build different structures out of a variety of bricks and blocks.

“I personally think we have a national champ on our hands,” Harrington said. “It takes a student that’s willing to put in the work.”

Dutton has come in during his free time and after school to practice and prepare for his competition, and building the sign at the bus garage was just another way for him to get more experience with real mortar.

Dutton, along with his classmates, Ricky Brown and Taylor Butgerit, showed up at 7:30 a.m. on May 19 to build the sign.

Before they arrived, the foundation and footer for the sign were already laid.

Over the course of five hours, the students built two columns and a line in between, leaving space for a sign. Premade concrete caps will be added to complete the sign.

“I enjoy laying the brick, and it’s good practice,” Dutton said. “It gets me out here and doing real-world application.”