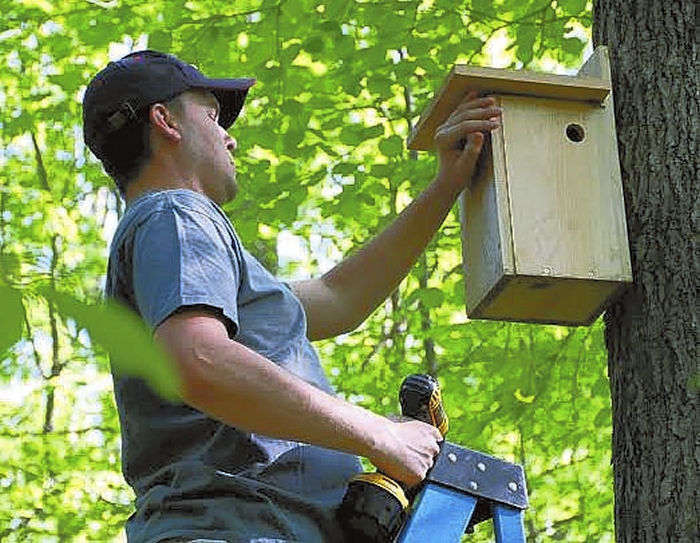 Catawba College senior Eli Wittum puts up a birdhouse in the Stanback Ecological Preserve near the Center for the Environment. Local children made birdhouses that were put up throughout the preserve. Submitted photo

Local children and the Center for the Environment at Catawba College have teamed up to provide new homes for the birds that frequent the Fred Stanback Ecological Preserve near the center’s building on campus.

The mind behind the project is Catawba College senior and environmental steward Eli Wittum, who says he got the idea from summer programs run by Lowe’s Home Improvement.

Lowe’s lets kids build birdhouses from scratch to take home, but Wittum thought the children might enjoy having their crafts placed in the preserve where they could hike the trails in search of the house they made. With help from Shaver Wood Products in Cleveland, the Center for the Environment, Horizons Unlimited, Dan Nicholas Park, the LandTrust for Central North Carolina and Lowe’s Home Improvement, he set up shop downtown during Salisbury’s Friday Nights Out.

The booth ran during the March and April Nights Out, and the kids built around 36 birdhouses. Most were modeled after the classic Eastern Bluebird house with a modified entrance to suit any bird, but there are also a few houses custom-made for Southern Flying Squirrels and Eastern Screech Owls.

Wittum installed the houses at the end of April and says that many are already in use. The location of each house is mapped so that children can go hunting for their birdhouses in the preserve, which is one of the goals of the project, Wittum says — to foster a love of nature.

“It encourages the family to go out in the woods,” Wittum says.