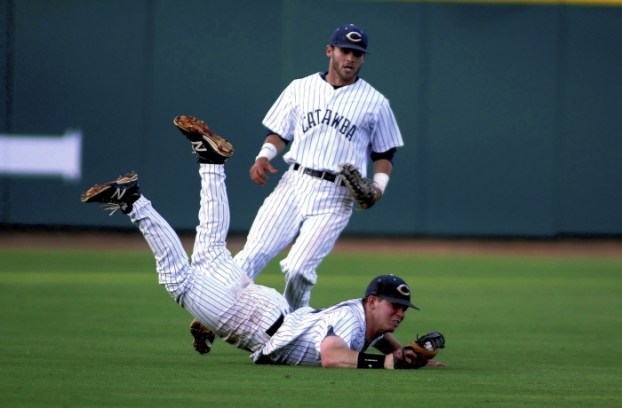 Catawba baseball: Reddies get roughed up

CARY — Hundreds of Catawba fans rose as one for a standing ovation as starting pitcher Sean Grant left the mound in the eighth inning with his job well done.
“Grant was the story,” Catawba coach Jim Gantt said. “If the other guys aren’t scoring any runs, you’ve got a heck of a chance to win.”
Grant nearly duplicated his brilliant outing in the final of the Southeast Regional, holding Henderson State’s Reddies to a single run and five hits and keying Catawba’s 5-1 victory in Monday night’s winner’s bracket game in the Division II Championships.
“Sean was just shoving it,” Catawba DH Will Albertson said.
Catawba (46-13) won its sixth game in a row and moved within one game of the school’s all-time record for victories in a season. Catawba will play again Thursday in the winner’s bracket final at Cary’s Coleman Field, while Henderson State (32-20) plays in a Wednesday elimination contest.
Grant said he threw fastballs 75 percent of the time and got a lot of outs on routine flyballs. He helped himself with the defensive play of the game, turning a hot grounder up the middle into a 1-4-3 twin killing to end the seventh inning.
“Just grabbed and threw it,” said Grant, who didn’t have time to think.
Ryan McClintock got the last out in the eighth on a routine groundball after relieving Grant. New closer Craig Brooks took care of the ninth with three straight strikeouts.
Catawba had a terrific start, with Blake Houston pulling a double to start the bottom of the first, and Austin Stilley driving him home with a gapper to left-center.
T.J. Wharton’s single and Brooks’ fielder’s choice — he hustled to beat out a double play — made it 2-0 in a hurry.
“A lot of times we go as Blake Houston goes,” Gantt said. “He got us started tonight. Then we got some key hits and were able to relax a little bit.”
Houston had been 2-for-22 in the postseason, but this time the senior delivered.
“It was huge to jump out early for Sean,” Albertson said. “He’s a guy we never score any runs for.”
Albertson, consensus national player of the year, has been a .500 hitter as a catcher but was hitting a human .333 as a DH. He had two hits as the DH against the Reddies and three quality at-bats. He was robbed of one hit by a diving catch in left.
Chance Bowden and Kyle Smith also had two hits.
Catawba’s first eight hits came from eight different players in the ultimate team effort.
Right fielder Luke Setzer, the only Catawba starter who didn’t get a hit, contributed two outstanding defensive plays — a sliding catch and throwing behind a runner at second base to end the sixth inning after Henderson State had finally scored its first run.
“Setzer plays great defense, and that’s the primary reason he’s in there,” Gantt said.
Catawba freshman Bowden had the single biggest hit of the game in the third. After singles by Albertson, Brooks and Dylan Richardson loaded the bases, Bowden drilled a bases-clearing double for a 5-0 lead. The ball was just out of reach of shortstop Carlos Rodriguez but was hit so sharply that it skipped all the way to the wall in left-center.
“I was just trying to be smart on that at-bat,” Bowden said. “I didn’t want to get too big with my swing, didn’t want to try to do too much.”
Bowden succeeded, and the Indians gave Grant the run support he deserved.
It was a big day for the Indians, on the field and off. Albertson and Brooks were announced as national award winners as player and pitcher of the year for Division II, as voted on by the coaches.

College Baseball: ‘Tock’ is a rock in Catawba bullpen