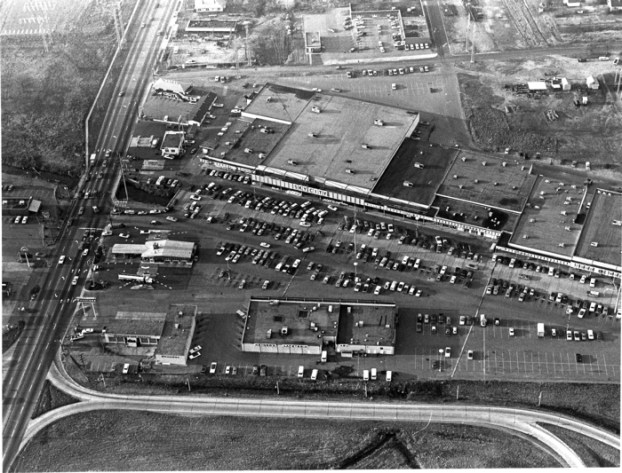 There’s a good chance many Salisbury Post readers remember Towne Mall, the shopping center located off East Innes Street next to Interstate 85. This aerial photo is from 1979, when Towne Mall included Sky City as one of its chief anchors. Sky City was gone by Oct 6, 1990, as was, Radio Shack, Eddie’s Deli and Big Lots, and the entire property itself was 41 percent vacant and in foreclosure. Sky City did business at Towne Mall for 15 years. In this photograph, you can see the footprint of the Sky City store in the center. At the top left center, it looks as though the Burger King restaurant is under construction at the intersection of East Innes and Arlington streets. The old Ketner’s Cafeteria is at bottom center, next to an ABC store. Left of the cafeteria is Firestone, which remains in business. Above the Firestone, traveling along that same side of East Innes Street were Quality Oil, an Exxon station and a motel (next to Arlington Street), all of which are long gone. Through the years, Towne Mall fell into terrible disrepair, even condemnation. In a bold move, Salisbury City Council bought the property for $500,000 in 1994, used part of it for an important sewer easement, then sold the rest to a Charlotte developer for $575,000. Dating back to the late 1960s, the old Towne Mall was finally razed completely in 1997, and today this same area is called Towne Creek Commons and includes eateries such as Chick-fil-A, O’Charley’s, China Buffet, Pizza Hut and Outback.

Michele Lobl of Valencia, Calif., provided this photograph of the last eighth-grade class to graduate from Frank B. John School,... read more