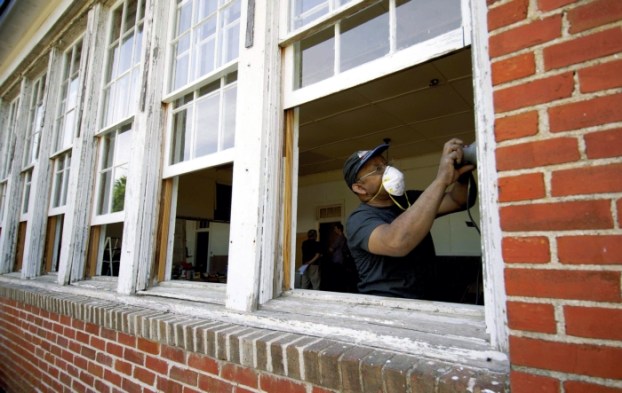 JON C. LAKEY / SALISBURY POST William Packs uses a palm sander on the window frames he and his fellow volunteers were working on. A volunteer group of employees of the Lowe's Home Improvement store in Statesville came to the Cleveland on Wednesday to make improvements to the R. A. Clement school building that was built in 1929 with funds from the Rosenward Fund.

CLEVELAND — Walking through the R.A. Clement School in western Rowan County, one can see and feel the life that was here … and the life that is coming back.

The H-shaped building, built in 1929, was a four-teacher school for black children during the era of segregation. Grades one through 12 were taught here. The last graduating class was in 1968.

There are still books, covered in dust, in the school’s library — a single bookshelf that is about 7 or 8 feet long and 5 feet high. Old chalkboards still stand in a couple of rooms.

The brick building has wood floors on the inside. A lonely swing set sits in the lawn adjacent to the school.

“It was beautiful scenery,” Patricia Moriniere said about the place where she spent much of her childhood. She graduated from R.A. Clement in 1966 along with 36 other students. The school was wrapped around the African-American community in Cleveland, she said.

“We didn’t have cars,” she said, “We stayed in Cleveland.”

The school was built as part of the Rosenwald Fund, which provided financial assistance for the construction of more than 5,300 schools and auxiliary buildings for black children in 15 Southern states from 1913 to 1932. The school is named for Rufus Alexander Clement, who was born into slavery in 1847. Near the end of his life, he and his wife, Emma, were benefactors for the school’s construction.

A photo of Clement sitting on a porch hangs on a wall in the school. Nearby, editions of the school’s newspaper, “The Clement Times,” are pinned to a board.

The school ceased to operate in 1968, and it was bought by a group of citizens with connections to the school in 1969. The group is now known as the West Rowan Neighborhood Center Advisory Council. The building served as a community center for many years before falling into disrepair.

But since 2003, renovation of the building has been slowly progressing.

About 15 employees from the Lowe’s store in Statesville volunteered a day working at the school Wednesday. One end of the building is being transformed into a community room with a stage. Lowe’s donated $50,000 toward the building’s renovation. Several other organizations, and the town of Cleveland, have donated money toward the renovation.

Angelo Franceschina, who works to preserve historic schools, is helping with the project. He said they’ve raised $200,000 so far and will probably need another $200,000 to finish.

Ruby Ford graduated from R.A. Clement in 1964 and was class president. She still remembers the room each teacher taught in. She said she and other kids used the swing to launch themselves over a small ditch in the playground.

“We had a beautiful time here,” she said.

Leonard Hall was raised just up the street from the school, which sits at the bend in Clement and Krider streets. He lived closed enough that he could walk to school, but said he was jealous of the other kids who got to ride the bus.

Leonard, who played basketball and graduated from R.A. Clement in 1967, still lives up the street. He is president of the advisory council and mows the school’s lawn.

“This is just home,” he said, adding he has family ties to R.A. Clement.

He said he wants the building to be a place community organizations can use. The next big job, after the community room is finished, will be installing an HVAC system, he said.

Moriniere, who lives in Concord, does a lot of work with the school’s alumni association, called the R.A. Clement Association. Information on 450 people who went to the school has been collected, and school reunions are held every other year. Members of the association spend time working on the building.

Moriniere said she thinks it’s important to preserve the school so young black people can learn from it.

“I think the young people don’t know about our history,” she said.

Young people in the neighborhood need to know this place was important, she said.

By Wayne Hinshaw For the Salisbury Post On this chilly Saturday morning, just as the bright sun began warming the... read more