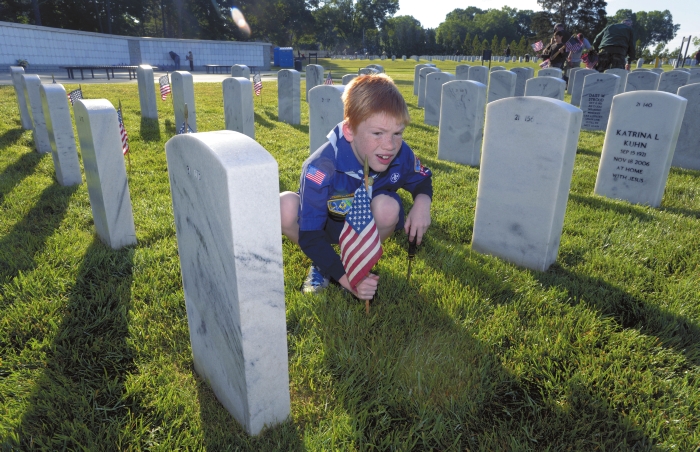 Nine-year-old Cub Scout Aiden Powers places an American flag on the grave of a of fallen veteran on Saturday at the Hefner VA Medical Center National Cemetery. Aiden is in Pack 320 from Woodleaf United Methodist Church.

On this chilly Saturday morning, just as the bright sun began warming the ground, volunteers gathered at the Hefner VA Medical Center National Cemetery to remember and honor the 6,100 fallen veterans buried there. The Boy Scouts, Girl Scouts, veteran groups and caring adults numbering close to 125 placed American flags on all the burial sites. Within 45 minutes, every white stone burial marker had a red, white, and blue flag planted in front of the stone.

Girl Scout leader, Monica Humphries said that this was the first year that her troop 1434 from Christ United Methodist Church had helped place the flags. Thinking aloud, she said, “I don’t know why we haven’t done it in the past. This year we had more planning time, and I’m glad to be a part of it.”

The Brad and Elizabeth Hartle family from Woodleaf made a family event out of the morning. Sons Dylan and Bailey are members of the Boy Scout Troop 320. Having helped for 6-7 years, Bailey said, “It is really good that we do this to honor veterans who fought in the wars. We come if its sleeting or snowing. Well, maybe not sleeting or snowing, but we have done it in the rain before.” The boys and Brad placed the flags while, mother Elizabeth’s hands and arms were loaded with dozens of flags. She even had flags stuck in the pockets of her jeans.

N.C. National Guard member Brett Miller was working with his 7-year-old daughter Madison placing flags on graves. Madison might have been dressed in the most patriotic dress in the cemetery. She wore a pretty red, white, and blue skirt and red shirt for her volunteer work. Madison’s dad works at the national cemetery every day helping with the burials of veterans. Usually, he is dressed in his dress uniform of the N.C. National Guard Military Honors team during the funerals. He helped with 6 funerals on Friday and there are 3 scheduled for Saturday. When he is not helping with the Honors team, he is trained as a medic in the guard unit. Miller said there were 6,100 buried in the cemetery at the VA and 7,000 buried at the old National Cemetery. He said, “By the time I need to be buried, this cemetery will be full. There will have to be another National Cemetery somewhere.”

Young Hannah Bowler, a Girl Scout from First United Methodist Church, said, “I am doing this to remember veterans who served their country. My grandpa was in Korea. He doesn’t talk about it.” Hannah’s mother, Lisa, reminds her that she needs to ask her grandfather, Alford Anderson, about his time in the military so that she will know more about what he did.

Jim Fox, with the Rowan Veterans Council, reported that there were another 50-75 volunteers placing flags on the graves in the old National Cemetery on this same day.

All the volunteers were invited to the Harold B. Jarrett American Legion Post for breakfast after their work was complete in the cemeteries.