College Baseball: ‘Tock’ is a rock in Catawba bullpen 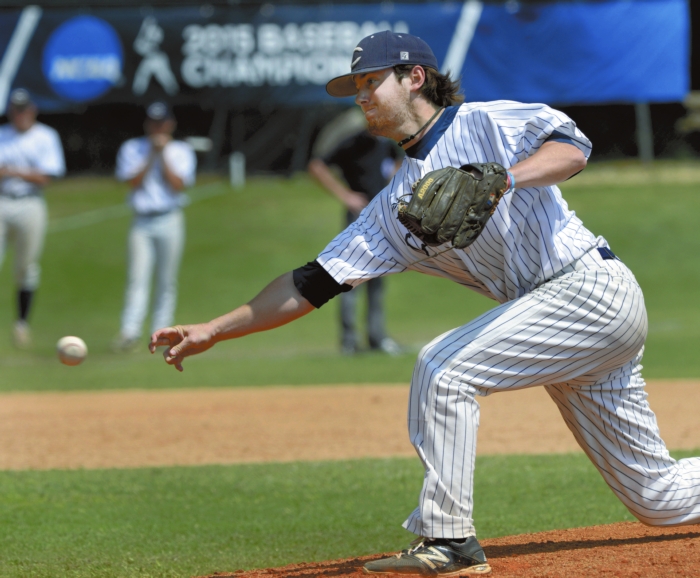 CARY — When he was at Charlotte’s Providence High, Catawba reliever Ryan McClintock’s  name named proved too much of a mouthful for baseball coach Danny Hignight.

Hignight shortened McClintock to “Tock” and it stuck.

“I’m Tock to everyone now, and even my parents call me Tock most of the time,”  McClintock said. “If someone yells for Ryan, I know they don’t want me. I don’t even look up.”

“Tock”  has pitched in more games than anyone in Catawba baseball history. The submarining right-hander made his 115th appearance Saturday as Catawba won, 3-2, against Wilmington, Del., in the tense first round of the double-elimination NCAA Division II Championships in Cary.

McClintock, a 23-year-old, fifth-year senior, is 9-0 during the last two seasons. He’s 10-2 in his career with 23 saves. He didn’t win or save Saturday’s game, but he helped decide it with the 13 pressure-packed pitches he threw in the bottom of the sixth inning.

Shepard (11-3) routinely pitches seven or eight innings and his pitch count was only in the 60s entering the sixth, but with Brooks, normally the ace starter, available to close, Catawba had more bullpen options than usual.

“With Brooks at the back of the bullpen, we wanted to shorten the game,” McClintock said. “If Shep ran into any kind of trouble at all, I was ready. I was tossing when he walked the first batter in the sixth. When he walked the second one, I knew I was going in.”

McClintock was already striding toward the bullpen door when Catawba coach Jim Gantt waved him to the mound.

Down two runs and with two on and no outs and playing in a big park, it was a bunting situation for Wilmington’s No. 5 hitter, catcher Matt Lopes.

Gantt likes to call on McClintock to relieve in bunting situations because of his experience.

“I’ve been around a long time,” McClintock said. “I know all our bunt coverages so well.”

McClintock had a long tussle with Lopes. He thought he had him struck out once, but Catawba didn’t get the call. After McClintock refocused, Lopes laid down a bunt with two strikes on him. It was a good one near the third-base line, but McClintock pounced on it. His quick throw got Lopes out at first by a step, as both runners advanced.

“It surprised me a little bit that he bunted with two strikes,” McClintock said. “But we were happy to get the out.”

McClintock then waged a struggle with shortstop Christian Adorno. McClintock nearly struck him out, but a breaking ball was deemed just outside. Then Adorno chopped a bouncer that cleared a leaping McClintock’s glove by an inch.

If McClintock had gloved the ball, he had the runner out at the plate. Had he deflected the ball, it may have been disastrous, as Catawba wouldn’t have gotten anyone out. Instead the ball hopped to shortstop Dylan Richardson, who calmly took the out at first base. A run scored for Wilmington, and Catawba’s lead was down to 3-2, but McClintock had protected the lead.

“That was a difficult situation, and we’re lucky to have a guy with the experience Tock has,” Gantt said. “He pitched like a guy who’s been in that kind of situation  before.”

McClintock was part of the Catawba team that reached the Division II Championships in 2012, but he didn’t get to pitch in Cary.

“This was my first World Series game, so the nerves were there,” McClintock said. “But it worked out.”

Gantt used only five different pitchers in Catawba’s four games in Cary in 2012 — all one-run games.

This time he used five pitchers in Catawba’s opener. He has faith in youngsters such as Michael Elwell and Bryan Blanton.

Southpaw Elwell replaced McClintock and got lefty hitter Sean Feeney out on a weak grounder to strand the tying run at third to end the sixth. Blanton walked two men with one out in the seventh but stranded those runners at second and third.

McClintock, Elwell and Blanton formed a sturdy bridge from Shepard to Brooks, and the flamethrower  breezed through the eighth and ninth with six straight outs and three strikeouts. Brooks leads Division II with 150 strikeouts.

The thrill of games like Saturday’s is what brought McClintock to Catawba in the first place. He knew Providence grad Greg Lawson, Catawba’s catcher when the Indians went to the  2012 Division II Championships, and he knew of former Providence shortstop Chris Ahearn, who starred at Catawba and was a draft pick.

“You know when you sign with Catawba, you’ll compete for championships,” McClintock said. “But getting a chance to pitch in a World Series, that’s almost too much to dream about.”

When he arrived at Catawba, McClintcock wanted to wear the No. 10 of Atlanta Braves icon Chipper Jones, but that number already was the property of hurler Clay Watson.

“They tossed me No. 29 and that was OK,” McClintock said. “That was John Smoltz’s jersey number with the Braves, and I always liked Smoltzie.”

Like Smoltz, McClintock has made a successful transition from starting pitcher to reliever.

For a guy who has been all-conference and all-region and honorable mention All-America, McClintock’s college career had humble beginnings.

“I didn’t pitch my first year,” McClintock said. “But Catawba had a submarine reliever (Wil Huneycutt) and I picked up things  from him.  I changed my delivery from over the top to submarine that year, and Coach (Randy) Benson has helped me a lot.”

After a decent redshirt freshman season, McClintock blossomed into a standout as a sophomore in 2013 and hasn’t looked back.

“My career is a pretty good lesson for all our young pitchers,” McClintock said. “Just keep working and trust what you do.”