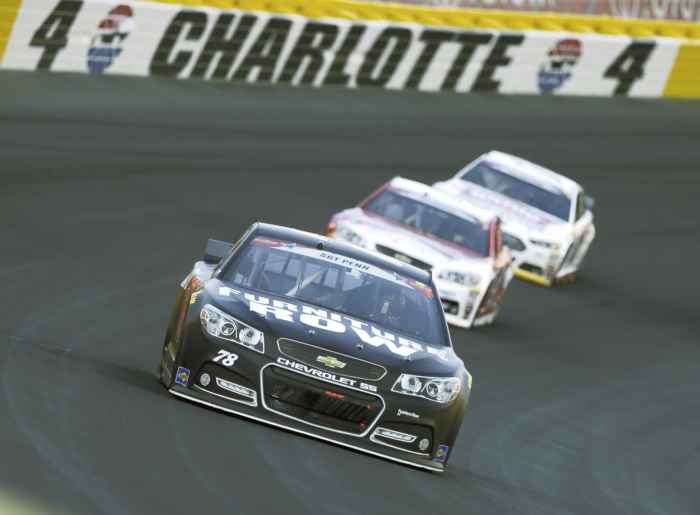 CONCORD — At 10:58 p.m. Sunday, Cole Pearn threw his head back and let out a long guttural sigh. It was another close call for the rookie crew chief and driver Martin Truex Jr.

He ran up front or extremely close to it from the time to green flag dropped until the checkered flag waved. Just like two weeks ago at Kansas Speedway, bad timing foiled the Furniture Row Racing team from getting its first victory of the season.

Truex had to pit under green with 22 laps left. After the pit stops cycled through, Carl Edwards was in the right position for his first win in his last 31 races and since moving over to Joe Gibbs Racing.

“It is what it its,” Pearn said. “I think we played the right strategy for us. It’s just, you know, those guys were where they could run 15th and run way off pace and get better mileage and save. It worked out for them.

“…It’s just NASCAR, you know. It just seems to go that way sometimes.”

Pearn said he told Truex to run as hard as he could after that final stop although he had a slim-to-none chance to run down Edwards.

It was the 11th top-10 finish of Truex’s season. He entered Sunday’s race second in the points.

Truex and Pearn were just two weeks removed from yet another race where they were in the hunt for a victory. On a wet Saturday night in Kansas, a bad call by Pearn cost the team a shot at clinching a spot in the Chase for the Cup.

Truex was hunting race leader Kevin Harvick. He was short on fuel by less than two laps. Pearn called for a fuel-only stop on a late caution. Truex restarted fifth. But the old tires they had didn’t give them a chance to win. He slipped back to ninth while Jimmie Johnson took the checkers.

Despite all the close calls this season, Pearn is not frustrated or feeling any pressure to win and secure a spot in the Chase for the Cup.

“It’s almost laughable at this point,” he said. “I don’t know what you do about it, right? I knew with probably 30 [laps] to go [Sunday they weren’t going to win]. You’re preparing yourself for it, especially having gone through it in Kansas.

“You just keep plugging away and hope you can get it next week,” concluded Pearn.