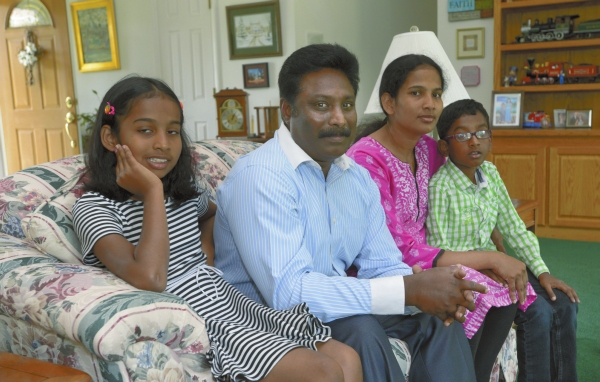 Brian Rex's family from India: Fabiana , Brian, and Esther, and Joseph William. They are visiting with Judy and William Deal in Lexington. Photo by Wayne Hinshaw.

1. This past week, a federal grand jury handed down indictments against 37 gang members, including some Landis and Kannapolis residents. Charges include distributing drugs, committing armed robberies, extortion, illegal possession of weapons, assaults, murder and more. What gang are those indicted supposed to be a part of?

2. Judy and William Deal of Lexington are hosts to a young family of four from Bangalore, India. What first brought the Deals and this family from India together some nine years ago?

A. The father was a high school foreign exchange student who stayed with the Deals in 2006

B. The Deals met them during a church mission trip to Bangalore

C. A Samaritan’s Purse shoebox sent by the Deals to India in 2005

D. They met during separate vacations in London in 2006

3. What local American Legion post is best known for a weeklong celebration revolving around Memorial Day?

4. A rare thing recently happened with Becky Tarlton’s horse, Beauty. What was it?

A. Beauty celebrated her 35th birthday

B. Beauty gave birth to twins

C. Beauty qualified to run in the June 6 Belmont Stakes

D. Beauty was chosen as only the second real horse mascot ever for the Southern Methodist University Mustangs

5. For the Memorial Day weekend, how did Tim and Linda Hoffner’s business, Father & Son Produce, pay tribute to men and women who gave their lives for the country?

A. They planted 200 white crosses in the lawn in front of the business

B. They are flying a gigantic U.S. flag, thought to be the biggest on display in North Carolina

C. They set up an elaborate patriotic fountain, which collected coins as donations toward homeless veterans

D. They planted 1,000 U.S. flags along their semi-circle driveway

6. Will Albertson accomplished a first for a Catawba College baseball player this season. What was it?

A. He was named the National Collegiate Baseball Writers’ Division II Player of the Year

B. He threw two perfect games this spring

C. He was named South Atlantic Conference Player of the Year as a freshman

D. He stroked four home runs in one game

7. Which of the following is true about how the Rowan County Board of Commissioners now deals, or doesn’t, with a prayer to open its meetings?

A. The board holds a moment of silence

B. One of the commissioners still offers a prayer, as has been the practice for years

C. Commissioners gather in a hallway prior to their meetings and offer up a prayer outside the formal board room

D, The board has a chaplain deliver an invocation to start its meeting

8. For the first time this year, the National Sportscasters and Sportswriters Association’s annual gathering in Salisbury will offer what?

A. A baseball game at Newman Park between the sportscasters and sportswriters

B. A “Take Me Out to the Ballgame” Festival in downtown Salisbury

C. Free admission to the awards ceremony at Catawba College

9. Through 2020, Rowan-Salisbury Schools has identified capital needs approaching what figure?

10. Who will be the featured performer this coming Friday and Saturday at Piedmont Players Theatre’s annual major fundraiser, “Night on the Stage”?

1. C. The MS-13 gang, which originated in Los Angeles, reportedly has more than 6,000 members in the United States and 30,000 internationally.

2. C. Judy Deal prepared and sent a Samaritan’s Purse shoebox in 2005 that was received by Brian Rex’s family in Bangalore, India, leading to a close relationship with the Deals through the years.

5. A. The Hoffners relied on West Rowan High shop teacher Richard Taylor and his class to make the 200 wooden crosses.

6. A. Albertson is the first Catawba baseball player to be named Division II Player of the Year and the first from the South Atlantic Conference to win that honor.

7. D. Pastor Michael Taylor, a chaplain for the Rowan County Sheriff’s Office, gave the prayer during the commissioners’ most recent meeting.

9. B. The $118.3 million in capital needs include a new elementary school in western Rowan County; a new Knox Middle School; and costs related to roofing, safety, paving, athletics and general capital needs each year.

10. D. Clarke, 30, spent four years playing Glinda the Good Witch in “Wicked.” “Night on the Stage” will be held at 6 p.m. Friday and Saturday at the Meroney Theater.

A clean sweep: John Alford one of the family at Goodman Millwork

SALISBURY – Because of John Alford, Goodman Millwork buys brooms from the Lions Club by the case. Really. Many times,... read more