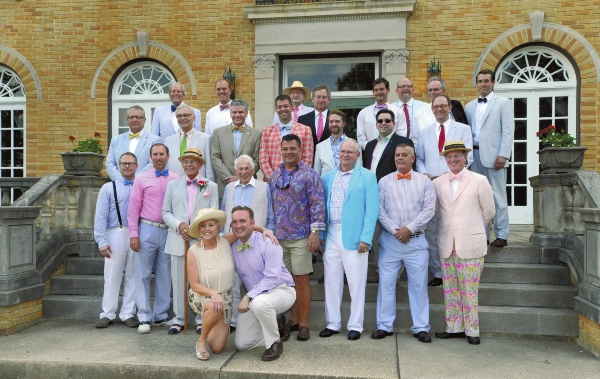 The men dressed for the High Cotton Men's Fashion Show for Family Crisis Council. Photo by Wayne Hinshaw, for the Salisbury Post

Men's fashion for a cause

On the evening of May 16, a sea of seersucker spread across an emerald green lawn on Confederate Avenue.

The occasion was High Cotton, a men’s fashion show, with local men modeling selections from their own closets. Hosts were Seamus and Tracy Donaldson.

District Court Judge James Randolph, one of nearly two dozen good men who were good sports for good cause, had a simple explanation.

“When you graduate from law school, they give you a diploma and a seersucker suit, and off you go,” Randolph said. “The rest is up to you.”

He may have been telling the truth. To be sure, there was a goodly number of attorneys in the crowd, but there were contractors, educators, a pastor, a restaurateur and even a retired surgeon thrown in for good measure.

The good cause was the Family Crisis Council, and the great news is that the event raised nearly $30,000, according to Renee Bradshaw, its executive director.

At 99, Ralph Wagoner brought down the house — er, the big white tent — when he took the stage, escorted by Bradshaw.

The World War II veteran graduated from the Citadel in 1936, is the retired vice president of Wagoner Construction, and, according to emcee Justin Dionne, “still likes to charm the ladies!”

The whistles and applause from the crowd surely bore that out.

Wagoner was an early supporter of the organization and remains a silent angel today, Bradshaw noted.

And did we mention Jay Dees’ pants? Dees, a partner with Ketner & Dees and Rowan County’s attorney, clearly did not get the seersucker memo. Dees paired a perfectly good Brooks Brothers pink linen blazer with some Lily Pulitzer men’s pants in shades of hot pink and lime green (I swear, I am not making this up). He completed this “loud” ensemble with a pink and orange seersucker (wait, there it is!) bowtie from Brooks Brothers, and a boater hat that belonged to his wife’s grandfather. It still had the price tag in the band: $6.50.

Brien Lewis, the Catawba College president, had buzzed over from graduation earlier in the day in a decidedly more conservative outfit. He wore a blue blazer from Hart Schaffner Marx, khaki pants, taupe buck oxfords, and a multicolored gingham-print shirt from Vineyard Vine that his daughter, Anna, had picked out for him.

“I know that I do not have a Southern wardrobe,” Lewis admitted, “but this is all for a good cause.”

“Most of my staff members are survivors,” Bradshaw said, “including myself. So there is a way to get there.”

For Sheriff Kevin Auten, modeling is old hat by now. Auten made his modeling debut at the Fashions for a Cause show earlier this spring. Like his attorney friends, he sported a Nautica blue seersucker suit, which he paired with a pink shirt and jaunty striped socks.

Chad Vriesema, a local contractor, was game about modeling — but not without his two daughters, Lydia, 7, and Abigail, 3. The girls looked adorable in matching dresses from Lolly Wolly Doodle in Lexington, which coordinated with their dad’s Tommy Hilfiger madras plaid jacket in reds and corals.

Attorney Todd Paris kept to the seersucker suit tradition, but paired his La Resistance red beret with his red tie.

Of course, Rick Anderson McCombs, owner of Sidewalk Deli and who enjoys being the smoothest, sharpest dressed man in town — according to Dionne — couldn’t just wear a blue seersucker suit. McCombs, who loves to shake things up when it comes to men’s fashion, paired the suit with a dazzling blue paisley shirt by Ralph Lauren. He finished off the look with “regular ol’ Allen Edmonds blue suede shoes” and a pocket square that matched his blue eyes.

Carl Repsher was extremely nattily attired, dressed in a light gray seersucker suit and pink polka-dot bowtie with burgundy, navy and cream spectator shoes. He topped off his outfit with a straw hat, hot pink carnation boutonniere, and carried a jaunty walking stick courtesy of Clyde.

Charlie Sowers looked especially handsome in a light gray seersucker suit with blue shirt, accented by a raspberry silk tie and green gingham silk pocket square. Wife Beth was happy to coordinate everything for her husband, a financial advisor, who carried a beautiful floral bouquet as he took the stage, presenting it to a delighted Mary Repsher.

Darrell Blackwelder: How well do you know your geraniums?

Garden centers and retail outlets are  gearing up full speed for the summer season with a virtual sea of vivid... read more