A send-off for 611: Hundreds pay visit to restored steam locomotive before its return to Virginia 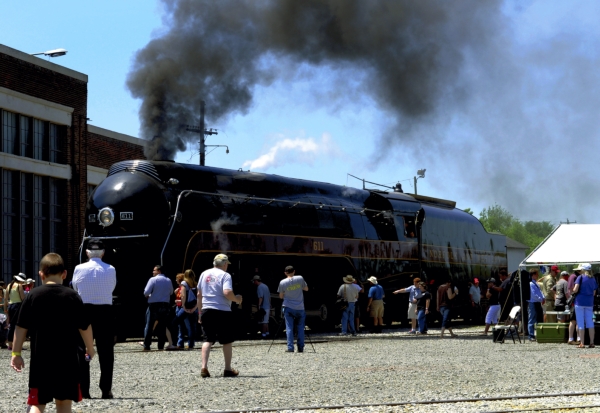 Hugh Fisher/For the Salisbury Post The Class J 611 locomotive sits idle on a siding while guests at the N.C. Transportation Museum take photos and get an up-close look at the steam engine during its send-off in May. The engine, which is housed at the Virginia Transportation Museum, will be back in Spencer Saturday for the Rail Day Festival.

SPENCER – After a year-long refit, it’s almost time for the Class J 611 locomotive to make its triumphal return to its hometown of Roanoke, Va.

Saturday, the N.C. Transportation Museum – home of the Norfolk & Western steam engine during its restoration – threw a “611 Send-Off” party, complete with activities and opportunities to see the locomotive up close, and in motion.

The Class J 611 is the last of its kind still in operation. Only 14 of this class were ever made.

“It’s important to recognize the great strength and the high technology that this engine represents, from the days before computers,” Lindsay said.

The last of the main-line steam locomotives, the Class J 611 was designed to pull passenger cars at speeds over 100 miles per hour.

But by the time the 611 rolled off the assembly line in 1950, the railroad industry was already starting to switch to diesel power.

The Class J 611 found its way to the Virginia Museum of Transportation. After a first restoration over three decades ago, it operated on special excursion trips around the eastern U.S., including travel through North Carolina.

Fans of the 611 came not just from other states, but from other countries to visit Spencer.

Among them were Vicente Adum and Maria Asunción, who traveled from Ecuador where Vicente has worked to restore vintage steam engines.

“When I saw it, I thought, ‘Amazing!’ The design – it’s huge, as compared to the locomotives we have in Ecuador. It’s like a plane,” Vicente Adum said.

“I’m proud for them, proud of the work they’ve done,” Vicente said as he stood in the shade beside the 611. “Having restored locomotives, I know how hard it is. You put your heart into it.”

For some kids and young adults in the crowd, Saturday’s special event was the first time in their lives they’d seen the 611 powered up in their lifetimes.

Lisa Cummins, of Winston-Salem, had her son, Bodhi, 4, at the N.C. Transportation Museum on Saturday.

Wearing striped engineer’s coveralls, Bodhi told about how he’d been able to pretend to work on the 611 using his toy tools: “I got to tighten the bolts, and then I got to grind the flues,” Bodhi said.

Graham and Amelia Davis and their son, Chris, rode to Salisbury from Durham on Amtrak’s Piedmont train to visit the Transportation Museum and see the 611.

“We’re originally from Virginia,” Graham Davis said. “The 611 used to go out from Roanoke to Norfolk before it was retired. It’s good to see her running again.”

Many of those in Spencer this week recall 611’s trips throughout the eastern U.S. on special steam excursion trips in the 1980’s and early 1990’s.

Others came to town Thursday, when the 611 made a test run to Greensboro and back on the Norfolk Southern main line.

The long-awaited trip drew hundreds of rail-watchers to take photos and videos of the engine’s first main-line voyage under its own power since 1994.

And videos of the 611 have “gone viral” on YouTube and other social media sites, with thousands of views and shares.

Misty Stach, of the N.C. Transportation Museum, said organizers expected hundreds to attend Saturday’s party, perhaps as a result of the attention.

Throughout the year, the N.C. Transportation Museum holds “At the Throttle” events, allowing people to purchase a chance to operate a smaller steam engine on the museum’s railway yard.

Saturday, the same chance was made available to fans of the Class J 611. For $611 each, individuals could have a turn at the controls of the 5,000-horsepower, coal-fired engine.

“All 10 slots sold out within the first 15 minutes,” said Kelly Alexander, chief operating officer of the N.C. Transportation Museum.

Rides in the cab of 611 were also available this weekend, for $300 each. As of 1 p.m. Saturday, only two of those slots remained, Alexander said.

Museum visitors also enjoyed activities celebrating the 611’s return to the rails, and special commemorative t-shirts and other goods were available.

Saturday, both men helped operate the engine as it pulled onto the turntable at the Spencer roundhouse for photo ops.

“We used to take this engine all over the U.S.,” Sandy Alexander said. “I’ve been as far north as Chicago and Buffalo, and as far west as Kansas City.”

“It’s nice to be back on it again after spending a year rebuilding it,” Mayer said. “It’s gratifying that we’ve got it back running again.”

“There’s a lot of people that stull want to see these things run, to show the kids and the next generation,” Mayer said. “It’s a lot of fun to see the expressions on their faces when they see us going down the railroad.”

Professional photographers have a chance to shoot the 611 on Thursday by purchasing tickets for a special “photo charter” event on the N.C. Transportation Museum grounds, Kelly Alexander said.

Doctor is pilot who examines other pilots