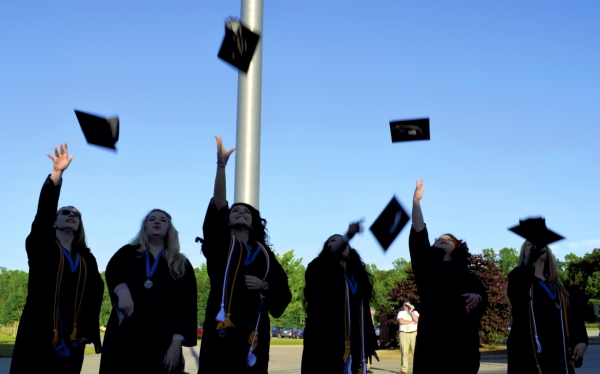 CHINA GROVE – Graduating from high school, or from college, is an exciting time.

It can also be terrifying, as Sarah Cook, valedictorian of the Rowan County Early College class of 2015, noted in her remarks at Friday’s commencement.

“And, to be forced to actually talk on the phone and not just text people,” Cook added, getting laughs from the audience and her classmates.

“With that being said, I can’t wait. I am excited to go out and experience life, not just on my TV or my cellphone,” Cook said.

Cook said that, for herself and for her 45 classmates, the future is waiting. “Once we get started, there’ll be no stopping us,” Cook said.

“They’re going to 20 to 21 different colleges and universities,” Miller said. “Eighty-three percent of them received the Associate’s degree with their high school diploma, and 11 of the students received both an Associate of Arts and an Associate of Sciences.”

By completing their basic college requirements concurrently with their high-school curriculum, Miller said, “they’ll be able to enroll in college and start taking classes as if they were juniors.”

That head start has led to far-reaching career plans for students like Gabrielle D’Amato, who’s heading for East Carolina University to pursue a Biology degree this fall.

“And then, medical school for pediatrics,” D’Amato said. “It’s exciting knowing that I’m two years ahead of everybody that I’ll be in medical school with. I’ll be ahead of the game!”

D’Amato, daughter of Daniel and Doreen D’Amato, said she plans to celebrate graduation on a beach trip with friends in June.

And then, at 17, she’ll enter college as a junior. “I’ll be the 19-year-old who graduates with a bachelor’s degree!” D’Amato said.

“This feels amazing,” said Casaundra Allen, one of the graduates of 2015. “At first, I didn’t feel I was going to be able to do it.”

But Allen said she’s got a bright future ahead of her. The daughter of Thelma Michael and Anthony Allen, she plans to attend East Carolina University this fall, where she’ll pursue a degree in nursing.

Allen said she wants to specialize in neo-natal care, to help take care of newborn babies.

That doesn’t mean she won’t miss her classmates. “I’m going to miss that family,” Allen said. “When I came to high school, I barely knew any of these people. We may not all be best friends, but I’ll remember them. That’s what matters most.”

Things have not been easy for the class of 2015. In addition to the usual struggles of high school and of life as teenagers, they endured the loss of one of their own, Jennifer Merriman, 17, who was killed in September during a domestic disturbance.

A moment of silence was observed for Merriman at Friday’s commencement, and the graduation program held her photo and a tribute “in loving memory of our dear friend and dedicated student.”

Cindy Misenheimer, who retired as principal of Rowan County Early College two years ago, was a special guest at Friday’s commencement to celebrate with her former students.

“It’s very exciting to get to see the kids finally make it,” Misenheimer said. “Many of them are the first in their families to graduate from high school or college, so they have changed the trajectories of their families at this point.”

Many of them have big dreams – among them, Jacob Garland, whose dream is to become a music producer.

“Grammys, red carpets, million-dollar cars,” Garland joked. “… Kanye (West) is going to interrupt me in one of my speeches!”

Those dreams aside, following graduation Garland plans to go to work and support himself for a while. “I’m going to move out on my own and be a grown-up. I’m ready,” Garland said.

His mother, Sheli Garland, said she’s proud of Jacob and looks forward to seeing him continue his education.

Josephine Vermillion, salutatorian of the 2015 graduating class, is looking ahead to a career in federal law enforcement.

Josephine, daughter of Kathy and Joe Vermillion, will attend Liberty University this fall, where she plans to major in Criminal Justice and Accounting.

The memories that will last from her high-school years will be the memories of times spent with special people, Josephine said. “I made a lot of really good friend who I’ll be friends with for years to come,” she said.

“I don’t want her to go!” Kathy Vermillion said. “But I’m very proud of her. She worked really hard to get to where she is today, and I know she’s going to do really well in college. She’s a blessing to all she meets.”

As the last of the parents and graduates filtered out, Tyler Carver and Caleb Hancock stopped to pose for a photo and to shake hands with Principal Miller.

The son of Tim and Sherry Carver, Tyler’s long-term plans include dental school and becoming an orthodontist, “about nine years from now,” he said.

“It’s nice to have a two-year head start, to get the prerequisites out of the way,” Hancock said. He plans to train with Novant Health and to become a radiology technician.

Caleb, son of Aleah Hancock, said it was good to be able to save money and have two fewer years of college to finance.

Carver agreed. “That was part of the reason my parents pushed me to go to Early College, getting those two years free.”

Miller said this year’s graduating class will stand out thanks to the accomplishments of many dedicated young men and women. “It’s a very determined group,” Miller said, “and we’re just so proud of them.”