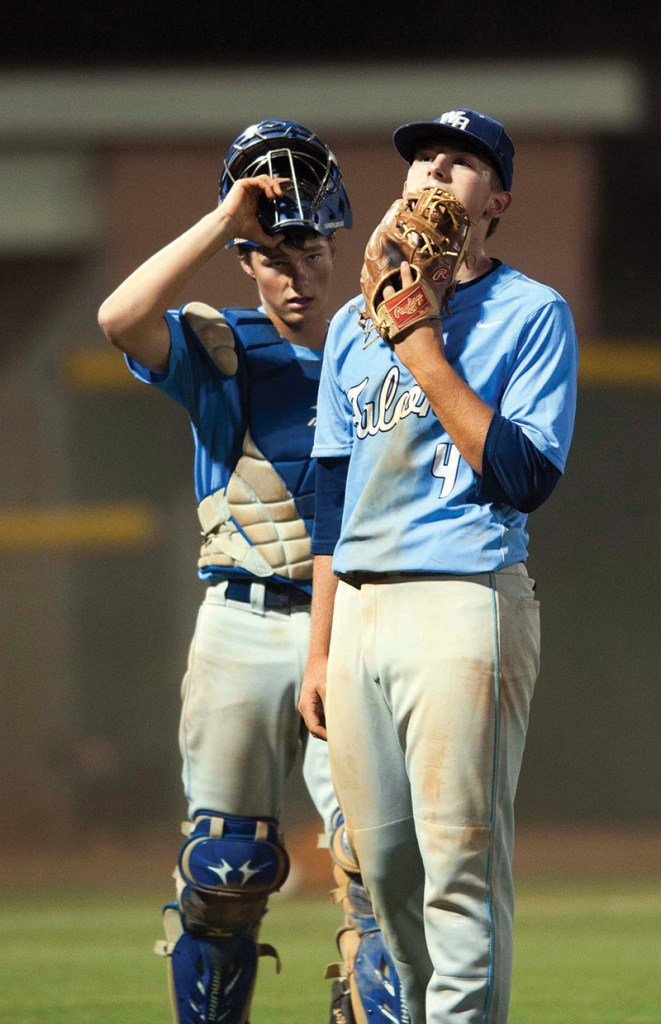 JON C. LAKEY / SALISBURY POST West Rowan pitcher Austin Love (4) looks away Friday after a walk-off home run by Marvin Ridge’s Jason Curtis in the bottom of the seventh inning at Marvin Ridge. The Falcons fell to the Mavericks 7-5 in the 3A state quarterfinals. It was the Falcons’ first trip this far into the postseason since 2004.

WAXHAW — West Rowan left fielder Lee Poteat retreated as far as he could, but he ran out of room and watched helplessly as the first homer of Marvin Ridge leadoff man Jason Curtis’ career left the ballpark.

Curtis’ walkoff, two-run homer off West Rowan youngster Austin Love  provided the top-seeded Mavericks with a 7-5 victory in a 3A state quarterfinal game and brought a sudden end to West Rowan’s strong season.

Alex Leshok had just been ruled safe on a steal of second base on a close call right before Curtis’ blast.

“It was close, but I couldn’t see it well enough to go argue it,” West Rowan coach Seth Graham said. “That steal changed the situation some and Curtis was the one hitter that was really battling Love. If we’d gotten behind in the count on Curtis, we were just going to walk him, but then he hits the 1-1 pitch out of the park.

“If that pitch is located a centimeter different, it’s just a popup to the infield. Instead it’s a home run. But that’s baseball.”

Love made it to third base on a walk, error and balk in the top of the third but was stranded.

West Rowan lefty Bryan Ketchie stopped Marvin Ridge for two innings, but the bottom of the third was a nightmare. Connor Paul’s liner to left fell in front of a diving Poteat for a double, and Leshok hit a line-drive single that whistled inches over the glove of leaping shortstop Jeremy Simpson to drive in the Mavericks’ first run.

With two on and one out in the third, Graham called in Love from the bullpen. After a walk, Max Wotell’s stung a two-run single to left. After West Rowan right fielder Harrison Baucom raced in and got to a shallow flyball but couldn’t hang onto it, it was 4-0.

The Mavericks tacked on a run on a wild pitch by Love in the fifth and cruised into the sixth with a 5-0 lead.

“It looked like we had it all going our way,” Marvin Ridge coach Mark Mennitt said.

West Rowan didn’t get its first hit until Juan Garcia punched a single to right field in the fourth, and the Falcons had only two hits — one on a bad hop — against Marvin Ridge sophomore Jake Kuchmaner through the fifth.

“We’re going to the top of the sixth, and I called the guys together,” Graham said. “I just reminded them that we’d competed all year, so why not now.”

The Falcons put two men on in the sixth. Simpson reached on a throwing error and Otto got on base when the Mavericks failed to catch his popup to shallow right. After a balk moved up the runners, Poteat came through with a well-stroked, two-run single up the middle, and West Rowan’s comeback was under way.

The Falcons (20-7) fought more in the seventh. Noah Teeter, batting ninth, walked with one out, and Baucom’s single to right brought the tying run to the plate and brought Mennitt to the mound for a pitching change.

“We’ve got a lefty (Wotell) who is the best player in North Carolina,” Mennitt said. “We’re going to put it in hands in that situation every time.”

Wotell, a likely draft pick, owns serious 92-mph heat and a wicked hook, but Simpson won a battle with him, walking on a 3-2 pitch to fill the bases. Then Wotell struck out Garcia with a curveball, and the Falcons were down to their last out.

Otto walked to force home a run to make it 5-3. Sophomore catcher Trevor Atwood smashed a groundball up the middle, a clean hit that sent Baucom and Simpson flying home to tie the game at 5.

After another mound visit, Mennett stuck with Wotell. The southpaw got the third out and kept the score tied going to the bottom of the seventh.

“West Rowan got off the deck and took the momentum from us,” Mennitt said. “West Rowan is tough as nails, but our guys showed they’re tough too. We’re a white-collar town, but we’ve got blue-collar guys.”

Mennitt said he was expecting to see West Rowan ace Omar Bautista on the mound at any minute, and he might have been dealing with Bautista had Love made it through the seventh. Mennitt added that he was “hunkering down and getting ready to play 14 innings.”

Thanks to Curtis’ walk-off, Marvin Ridge didn’t have to go 14.

“We finally won a tough game against one of the Rowan County teams,” Minnett said with a sigh of relief.

Marvin Ridge will play Crest in the Western championship series, but the Falcons had a memorable season.

They left the ballpark with tears in their eyes, but they left to a standing ovation. 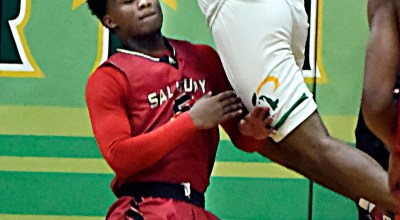