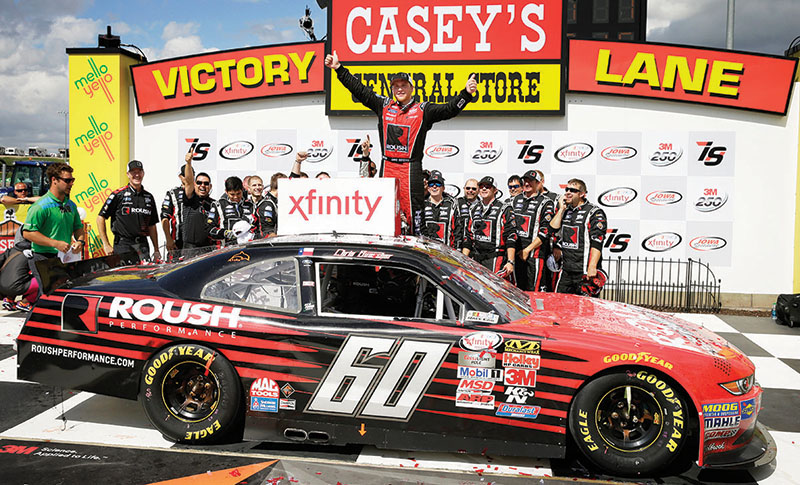 The Associated Press Chris Buescher celebrates in victory lane after winning the NASCAR Xfinity Series race Sunday at Iowa Speedway in Newton, Iowa. The victory moved Buescher into the top spot in the series points standings. All four Roush Fenway Racing drivers running the series are in the top 10 in the standings.

CONCORD — Life in the Xfinity Series program for Roush Fenway Racing is good as the team gets ready for Saturday’s Hisense 300 at Charlotte Motor Speedway.

Chris Buescher leads the series after a thrilling win in a green-white-checkered finish last week at Iowa Speedway. Teammates Darrell Wallace Jr., Elliott Sadler and Ryan Reed all find themselves in the top 10 in the series points standings.

The season started quickly with Reed and Buescher finishing 1-2 at the season-opening Alert Today Florida 300 at Daytona. The four drivers have posted a combined 15 top-10 finishes. Six times, at least two drivers were inside the top 10.

Buescher, Wallace Jr. and Sadler were all there last week in Iowa.

“I feel like a very important part of our early success as a team has been getting all of our drivers on the same page,” Sadler said. “We had a trip down to Daytona, I think, in February. We all kind of sat down together and it was kind of like I gave my two cents worth of teammates I had in the past and the benefits of working together.

“If we kind of keep that same concept going forward, it’s going to be good for all of us. We tried to look at it as one team with four drivers.”

Sadler said all four drivers share notes on tracks and that has led to the good equipment they have.

It’s also teamwork. Buescher restarted third at Iowa after pitting for right-side tires. A bump on the restart from Wallace Jr. allowed Buescher to get around race leader Chase Elliott and drive away to his first win of the season.

“The two tires there at the end was huge for me,” Buescher said. “It was the exact scenario we needed. I would have been more comfortable with it a couple of laps earlier, but we had pretty much planned for a late-race caution to put our last set of stickers. It worked out really well, and that’s what we needed to happen.”

Getting to the top of the points race was a nice byproduct of that move.

“It’s nice to have,” he said. “You never plan on anything — and I’m not a points racer, but it is a weight off your back at this point. It is nice to know we have that little bit of cushion to take some chances at this point.”

Wallace Jr. sits in fourth place in the standings, just 37 points behind Buescher. Sadler is in seventh, and Reed occupies eighth.

Sadler and Wallace Jr. are welcome additions to the Ford team after driving under the Joe Gibbs Racing umbrella in 2014. Sadler finished third in the Xfinity Series standings for Gibbs while Wallace Jr., driving for Kyle Busch Motorsports, won four times on his way to a third-place finish in the Camping World Truck Series.

“The transition, it’s been good,” Sadler said. “I feel like the pieces of the puzzle are put together. I feel like some of the races we’ve given away and maybe some points that we shouldn’t have.”

Talladega falls into the category of races where Sadler wants a mulligan.

He rode Joey Logano’s bumper on the final lap of the Winn-Dixie. Sadler then backed off to get a bit of room to make a move, but Buescher and the outside line made a run. Logano moved up top for a block to seal his victory. Sadler finished seventh.

Despite that, Sadler said the team is making progress as the season moves forward.