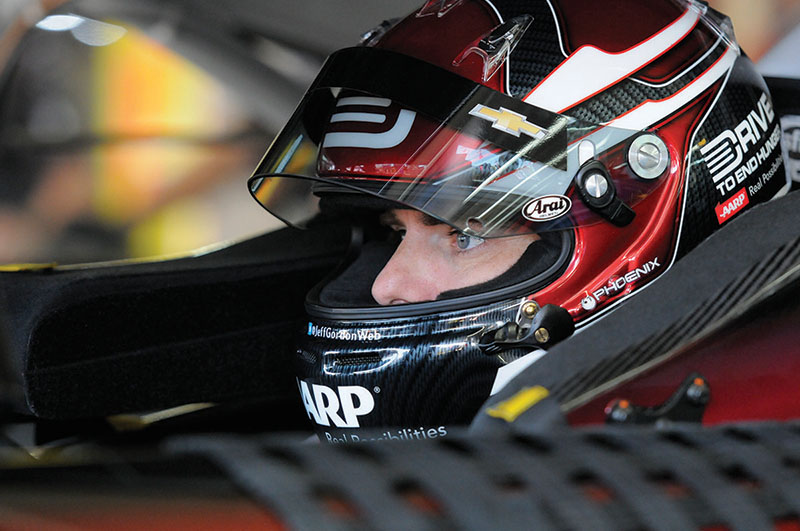 The Associated Press Jeff Gordon sits in his car Saturday during practice for Sunday's Coca-Cola 600 at Charlotte Motor Speedway in Concord.

CONCORD, N.C. (AP) — Sentimentality can wait. Jeff Gordon is not ready to focus on life after racing as his farewell tour arrives at the longest event on the NASCAR schedule.

Gordon, in what’s become a weekly line of questioning, was asked for his emotions running his last Coca-Cola 600 at Charlotte Motor Speedway on Sunday night.

“I think if this were my final race ever, it’d be different,” the four-time Sprint Cup champion said. “But I have a whole season ahead of me and that’s not where my mindset is at right now.”

For Gordon, the task is finding enough speed to compete at one of his favorite tracks. He will start 18th, well back in the pack behind pole sitter Matt Kenseth.

Gordon has won five times here, including three Coca-Cola 600s in a five-year span with victories in 1994, 1997 and 1998. He last win came in Charlotte’s fall race eight years ago and he’d love to wind up with one more checkered flag.

“A part of me wishes it was” Gordon’s final race, he said, “because this is a very special race and moment for me and I’m looking forward to that.”

Gordon, who turns 44 in August, removed some of the mystery about his future with Thursday’s announcement that he’d join the Fox Sports broadcast booth next season calling races for NASCAR’s Xfinity Series.

TV has long been in the back of his post-racing plans and he has grown more comfortable, he says, with the three Xfinity events he called this season. Still, Gordon expects some very sharp tugs at his heart next February when it’s time to go racing at the Daytona 500 and he is not lined up.

Gordon said he spoke this week with Fox broadcaster and NASCAR Hall of Famer Darrell Waltrip. Waltrip explained how odd it felt the first time there was a driver’s meeting that he didn’t attend as a competitor.

“I won’t really know how that feels until I go through it,” he said. “But it’s going to be different.”

Kevin Harvick’s season combined with how well he races at Charlotte could lead to his third Coca-Cola 600 victory since 2011. Harvick has finished first or second in eight races this year. He has also ended in the top 10 in eight of his past nine races here. “This is an important race as far as ones that you circle on the calendar,” he said. “The Coke 600 is definitely one of those that you want to win.”

Greg Biffle qualified fourth to give struggling Roush Fenway Racing its best starting position of the season. Biffle had the previous best of seventh at Kansas two weeks back and sees his latest run as progress.

But there’s a big difference between a fast lap and competing for a win after 600 miles. “We’re struggling a bit right now, so we’re just going to have to work hard in practice and see what we can do,” he said.

A season ago, Jimmie Johnson came to the 600 without a victory and with too many people asking him what was wrong. Johnson gave an emphatic answer with a victory that jump-started his season. He looks to extend his mark of seven victories at Charlotte when he starts 13th Sunday night. Johnson comes in leading the Sprint Cup Series with three victories.