Catawba baseball: Doing it for Hunter 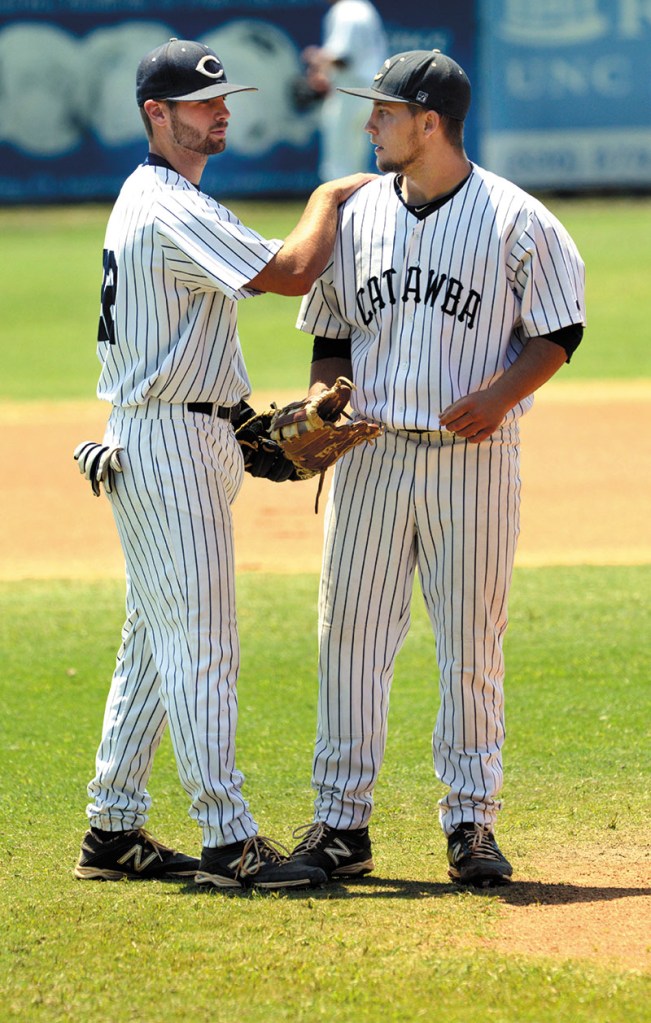 FILE photo by Wayne Hinshaw / for the Salisbury Post Catawba‘s starting pitcher Sean Grant (16) gets a pat on the back Sunday from Craig Brooks (22) to start the Indians’ game against North Georgia in the championship of the Southeast Regional tournament. Grant dedicated his win that day to his 2-year-old nephew Hunter, who passed away in a car accident in South Carolina.

It was with a heavy heart and the memory of a life lost far too early that Sean Grant took the mound for Catawba in the Southeast Regional championship game.

With him were the thoughts of a young nephew lost before he could play his first baseball game. Hunter Grant, 2, was killed May 11 in a head-on car collision in Dorchester, South Carolina.

With Grant being in college at Catawba and playing baseball, he didn’t get the chance to see Hunter often. It, however, was always good when he did.

“I wasn’t close with his dad because of various reasons, but when he came over we tried to be happy and have fun with him,” Grant said. “He loved coming over, and he’d go swimming. We were as close as we could get since I was in college.”

Grant went home as soon as he heard of the accident. He said head coach Jim Gantt told him to take as much time as he needed.

The Indians players and coaches rallied around Grant after the tragedy. He said his teammates sent him countless text messages saying there were there for him and the coaching staff offered its support as well. The team could tell he needed it.

“He didn’t say anything,” Gantt said. “He’s one of those guys, he’s not a big talker. You can look in his eyes and tell he’s (feeling it).”

His performance in Sunday’s championship game was dedicated to his nephew. Though don’t think his time in the dugout and on the field provided Grant a respite from grief.

That’s exactly what he did. Facing North Georgia at Finch Field in Thomasville and with a slot in the Division II World Series in Cary on the line, Grant threw seven innings of two-hit baseball game with six strikeouts and two walks. He worked his way through four three-up, three-down innings and faced only five batters over the minimum.

It was his best outing in three starts this season.

“He needed something good to happen to him,” Gantt said. “…He still has to deal with it, but he is able to get over it.”

After the Indians won on a walk-off wild pitch, Grant sought his family in the crowd. It was the end of an emotional day.

“I tried to keep my composure, but after the game, I went and hugged my family,” Grant said. “It was tough trying to hold back my tears.”

And just as the thought of Hunter was with Grant on Sunday, it will be there this week in Cary as the Indians go for a Division-II national championship.

“I just want to do the best I can for him because I know he’s up in heaven watching us play,” Grant said.

Prep Baseball: Falcons on the road for Round 4