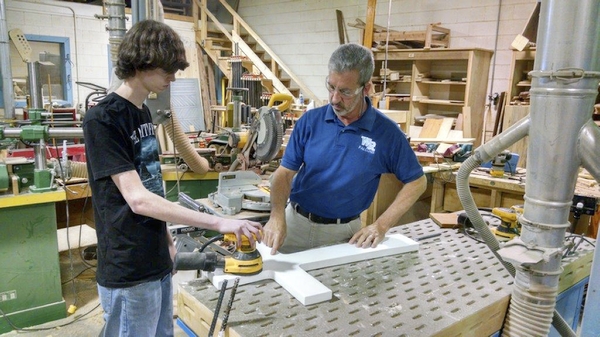 Through the years, as a teacher at West Rowan High School, we have been asked to make a variety of unique items in the Cabinetmaking Shop. We have built display stands for a music museum and flag boxes for a military museum. We have constructed so many bird houses and feeders that I cannot believe there are any homeless or hungry birds anywhere near Rowan County. So when Tim and Linda Hoffner at Father and Son Produce contacted me about a project, I thought it would be something rather common. Boy was I wrong.

To celebrate Memorial Day, Tim wanted to put crosses in the store yard to honor  those who have served our country. A prototype was made of the sacrifice cross, and Tim and Linda approved. They decided that 200 crosses would be needed. I have to admit that I was a little startled at the number at first, but remembered the massive workforce of students that I had available and decided that we could pull it off. I ran it by the classes, explaining the meaning of the sacrifice cross and what a great tribute this would be to those who have made the supreme sacrifice. It would also be a great opportunity to have a live mass-production project. The students were all for it, so planning and collection of materials began.

The necessary workstations were set up, tested and adjusted. Suddenly the shop was humming like a beehive. There were a few “oops” moments, which I expected, but eventually everyone found the place where their unique skills were the most efficient and an asset to production. The crosses involved two pieces joined with a “dado” joint, which allowed the cross to be flat, not just one piece nailed on top of the other. To make this joint on one piece took 13 passes over the saw. There were 200 crosses, therefore 400 pieces, each requiring at least 13 passes. Now you see where I am going. There were at least 5,400 passes on just one of the machines needed to complete the project. It seems like a lot of work, but nowhere near the price paid by those who the crosses are to represent. When I explained it to the students like this they simply went back to work, there was not much more complaining about this time-consuming part.

As the process moved along, the students began to see what was needed and were able to make some of the important decisions themselves. Construction went mostly as I expected, while painting took a little longer than planned. I must say that it was a very busy and interesting two weeks in my teaching career.

Please take the time to go by Father and Son Produce, 1774 Sherrills Ford Road, and take a look at what the students produced. Families can claim a cross in honor of their veteran. I think you will be quite impressed. Also, don’t forget to keep the reason for the upcoming holiday in mind. Thank a veteran for his or her service, and perhaps offer a silent prayer for those who made the supreme sacrifice.