Prep Baseball: Falcons on the road for Round 4 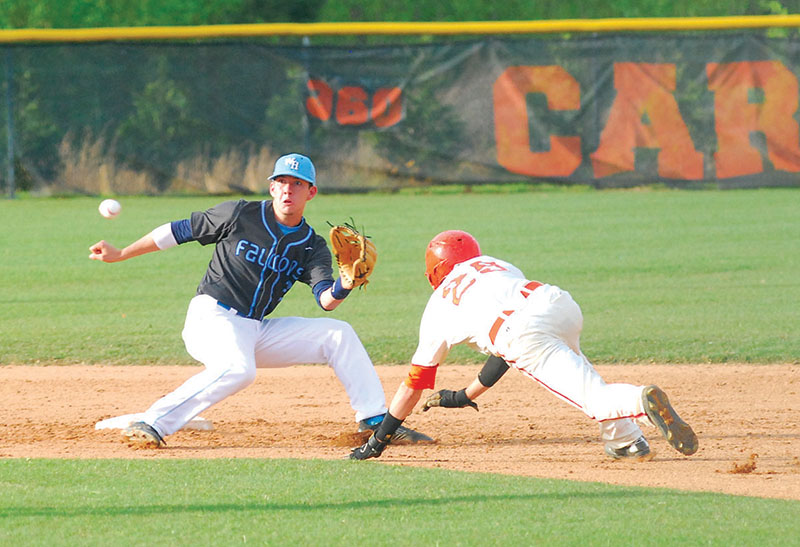 ADAM HOUSTON / SALISBURY POST West Rowan's Jeremy Simpson (3) waits for the ball as Carson's Brycen Holshouser (25) attempts a steal Wednesday during a South Piedmont Conference game at Carson. Holshouser was out on the play.

Asked about the booming first-inning double he stroked Tuesday to jump-start the Falcons toward a 3-2 playoff victory against Forestview, Simpson grinned.

“You know what they say about even a blind squirrel finding a nut every now and then,” Simpson said. “I was that blind squirrel.”

Simpson’s .275 batting average is low for a guy who signed with Catawba, but he’s been the perfect No. 2 hitter for a team that is 20-6 and heads to Waxhaw to play Marvin Ridge on Friday at 7 p.m. in a 3A state quarterfinal game.

Simpson leads the Falcons with 25 runs scored. He’s third on the team with 14 RBIs, and he’s walked 14 times. Best of all, he understands his role.

“My job is to move our leadoff man (Harrison Baucom), so our No. 3 hitter (Juan Garcia) can drive him in,” Simpson said. “You can’t be selfish. You can’t worry about what your batting average is.  No one has been selfish on this team, and that’s why we’ve been as successful as we’ve been.”

Catawba coach Jim Gantt also coaches the Rowan County American Legion team and saw enough of Simpson in Legion ball last summer to offer him a scholarship in fall. Simpson has a college-level glove now, and his bat is getting better every day.

“It’s not like you can turn down an offer from Catawba with the kind of baseball tradition they have,” Simpson said. “My dad (Steve) and uncle (Jeff) went there. I grew up wanting to go there.”

Simpson said it helped him that his older brother, Zack, was a good player at West Rowan and Brevard.

“Watching him play, I was always at a ballfield somewhere as a kid,” Simpson. “Baseball was my life.”

Simpson said he’s made strides with his focus and his strength this season.

“Jeremy has come a long way,” Baucom said. “He’s a gifted athlete, and he’s a good situational hitter. His ability to adjust to the situation is his best aspect as a hitter.”

West Rowan finished 13-10 a year ago, tied for fourth place in the South Piedmont Conference and exited the playoffs in the first round.

A core group from 2014 — Simpson, right fielder Baucom, third baseman Garcia, pitcher Omar Bautista and second baseman Noah Teeter — is still around. Young players were ready to shine this season, including center fielder Kacey Otto, pitchers Austin Love and Bryan Ketchie and catcher Trevor Atwood. They helped the Falcons run away from the SPC pack with a 13-3 record.

West Rowan changed coaches prior to this season. Seth Graham, who coached college and American Legion teams but never a high school squad, took the reins.

“I approached this like I was coaching college guys,” Graham said. “We started working in the fall, putting in a lot of time, and I know that it was a lot more time than they were accustomed to. It was tough for them at first, but they fought through it.”

The Falcons stood 8-5 after losses to Charlotte Ardrey Kell and Weddington in a high-powered Easter tournament, but they’ve only lost one of their last 13 outings.

“Guys are playing with a lot of confidence because they know how hard they’ve prepared themselves,” Graham said. “I’m just putting ’em out there now and watching them do the job. They’re a close team.

“A lot of teams have good players, but what makes good teams is the intangibles. I like our intangibles.”

West Rowan hadn’t won a playoff game since 2008, but it has taken care of Hickory, Morganton Patton and Gastonia Forestview in Mount Ulla in recent days.

“It’s almost like we started over this season,” Baucom said. “We’ve had a good bond, and we’ve done things I could never have imagined us doing in the past. If we just do the things we’re supposed to do, we believe we can play with anyone.”

West Rowan hasn’t been this far since its powerful 2004 team, directed by Carson coach Chris Cauble, won 29 games and finished as 3A state runner-up. That team had two 10-game winners on the mound (Patrick Adams and Wade Moore), smashed 26 homers, and boasted three .400 hitters and seven .300 hitters. Shortstop Bryan Graham batted .431 with 40 RBIs.

The bats have changed and the game has changed. It’s almost all pitching and defense now. The current Falcons have hit only five homers (four by Garcia), and they are batting .257 as a team. Otto, batting .273, leads the team with 19 RBIs.

Graham said left-hander Ketchie will start for the fourth-seeded Falcons against top-seeded Marvin Ridge (24-5). Look for hard-throwing Austin Love to be in the DH spot. He’ll be the first reliever called on if Ketchie runs into trouble.

“Their ace is a draft-pick guy, a guy who’s basically been unhittable,” Graham said.

West Rowan is the underdog on the road, but the Falcons did beat Hough, one of the teams that beat Marvin Ridge.

“Obviously, they’re a strong team, but every game is winnable,” Graham said. “Everyone that’s playing now is good.”

That includes the Falcons.