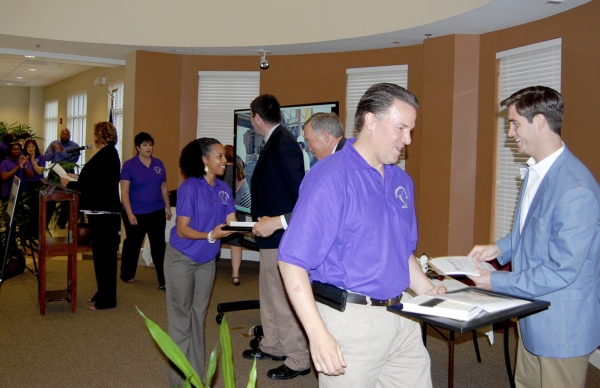 Jon Folstad walks off the stage after graduating from this year's Leadership Rowan Class Thursday at Trinity Oaks.

Leadership was the theme for the Rowan County Chamber of Commerce’s final Power in Partnership breakfast of the season Thursday morning at Trinity Oaks.

The 22nd Leadership Rowan class graduated and heard from a nationally recognized speaker who’s area of expertise is leadership.

Leadership Rowan is focused on developing leaders for the community by selecting a diverse group of people who meet with current leaders, develop their own leadership skills and discuss the important issues the community faces.

Phillip Van Hooser has been conducting leadership training since the late 1980s. He has also authored books on the subject. He talked Thursday about what leadership is, and what it isn’t.

Leadership does not come from a title or a position, Van Hooser said, meaning just because someone is an elected official or the CEO of company it doesn’t make them a leader.

A title only gives someone the “opportunity to do something special,” he said.

Van Hooser said leadership means the ability to offer service and the willingness to take action.

“We define ourselves as leaders by what we learn from our followers,” he said. How can we better serve people, whether it’s family, friends, co-workers or customers, he said, adding people must earn the right to serve.

To earn the right to serve, people should be consistent in their deeds, words and purpose, he said. They must also consistently make quality decisions.

There are no perfect decisions, Van Hooser said, and no one can predict the future. Decisions should be well thought out, he said. Do the homework, talk to others and get information.

Leaders take responsibility for their mistakes, failures and bad decisions, he said, and they learn from them.

The ability to get along with people is crucial, Van Hooser said, especially when those people are different from you. “You don’t get extra credit for loving the lovable,” he said.

Respect, loyalty and friendship are crucial for those in leadership roles, he explained using a story about an old college friend.

Van Hooser was in Louisville, at the airpot, but couldn’t rent a car because his license had expired — which he hadn’t realized. Stuck at the airport, he thought of who he could call in Louisville for help. He hadn’t seen his friend in years, but when asked for help, the man didn’t hesitate to let Van Hooser use his car while he was in town.

Later, the friend told Van Hooser a story about a co-worker who questioned why he would lend his car to a person he hadn’t seen in years and who didn’t have a valid license.

“Because he’s my friend,” was the answer he gave.

“Get past yourself. Focus on others,” Van Hooser said, that’s when people make a difference.

Graduates of the 2014-15 Leadership Rowan Class are:

The deadline to apply for next year’s Leadership Rowan Class is May 29. For more information on the Leadership program, contact the Rowan Chamber at 704-633-4221 or info@rowanchamber.com. The 2015-16 Power in Partnership season starts in September and runs through May 2016.