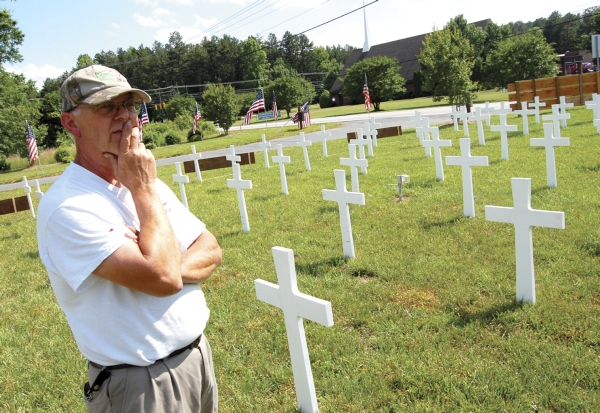 In honor of Memorial Day, Tim Hoffner, with the help of several people, has put nearly 200 crosses in the lawn in front of this produce market on Sherrills Ford Road north of NC 150. People whose loved ones have died while serving in the military can put the name of the service member on one of the crosses.

Tim Hoffner asked the Lord to give him an idea of how to honor members of the military who died for their country this Memorial Day. And he wanted it to be something he wouldn’t be able to do alone.

Tim came up with a plan to put wooden crosses in the lawn in front of his produce market, called Father and Son, on Sherrills Ford Road just north of N.C. 150. He and his wife, Linda, opened the market in 2012.

Tim said there was no “bolt of lightning” that struck him and gave him the idea. It came together over time. He started thinking about it after Veterans Day last year. Linda said it probably came to him during one of the early morning drives that he often goes on.

Tim told his good friend David Freeze about the idea, and Freeze said he should get in touch with Richard Taylor, who teaches shop at West Rowan High School — where Tim and Linda went to school.

Tim contacted Taylor about the plan, and Taylor designed a prototype sacrifice cross, similar to the ones commonly used in memorial cemeteries for those who died in war.

Taylor was a little startled when Tim and Linda asked for 200 crosses to be made.

Taylor realized his students in shop class could help with the project. After hearing the plans, the students were all in to make it happen.

The project took two weeks to complete. But Tim said he couldn’t design the layout of crosses on his own.

So the Lord provided.

Rick Shulenburger, with Shulenburger Surveying, marked off the area for the crosses, which are spaced 6 feet apart with 10 rows and 20 columns. But Tim was going to need help putting all the crosses in the ground.

Tim’s friend, Rick Ridenhour, an Army veteran who served in Vietnam, was glad to help. The crosses were delivered to Father and Son Produce on Monday and installed this week. All but two crosses, ones that didn’t have pegs for sticking in the ground, were used. Small American flags fill the two spots without a cross.

American flags surround the area where the crosses stand. Signs, made by another friend, list the branches of the U.S. Military.

In front of the memorial, a sign reads “Freedom’s Price.”

Tim said people whose loved ones died serving the country can have the service member’s name and branch placed on a cross.

Each cross has a necklace, with a small cross made of nails on it, around it. The necklaces were made by Bonnie Myers, whose late husband, Joe, served in the U.S Air Force.

“They need to be recognized,” Tim said about the men and women who serve in the military, especially the ones who gave their life for their country.

It all came together, Tim said, because “the Lord provided.”