The magic shoebox: ‘A story you don’t hear every day’ 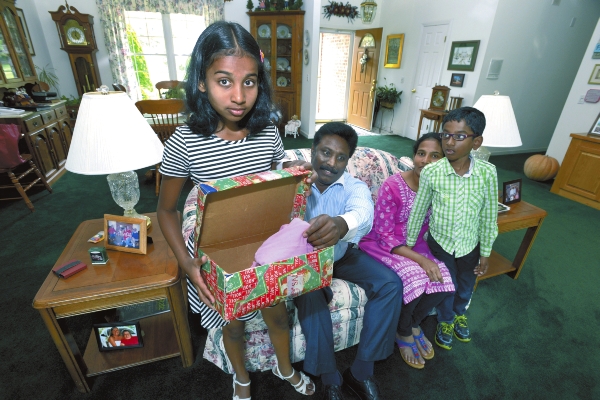 This week, 82-year-old Gladys Castor has spent most of her waking hours getting ready for a three-day yard sale at her house off Roseman Road near Salisbury.

The origins of this yard sale can be traced directly back to a shoebox in India almost 10 years ago.

“This is family,” Castor says. “You do a lot for family, and this is a story you don’t hear every day.”

The story does start with a shoebox — one Gladys’ daughter Judy Deal prepared in 2005 and sent out as part of Samaritan’s Purse and its Operation Christmas Child. Deal, a South Rowan High graduate and longtime Lexington resident, didn’t know where the box was going, only that it was for a child far away in desperate need of a gift for the holiday.

She filled it with things for a little girl, and it was one of about five she and her husband, William, prepared each year. Judy included their address and a card, though she never expected to hear back.

The Deals’ shoebox reached India and the family of Brian Rex, his wife, Esther, and their little girl, Fabiana. While living in a coastal town next to the Indian Ocean in 2004, the Rexes lost their home and all of their belongings in a tsunami.

They moved inland to Bangalore, where they were living in a shelter and barely making ends meet when the shoebox arrived like a message of hope.

Many things bordering on the miraculous have happened since then, but the Deals came to love, cherish and support the Rexes, who are now in the United States on a temporary visa, visiting with the couple and seeing as many things as possible before flying home to India in mid June.

Brian, 40, and Esther, 33, call the Deals “Mom” and “Dad,” and their children, Fabiana and Joseph, look on the couple as grandparents.

That Christmas in 2005 before the Deals’ shoebox arrived in India, Brian Rex felt as though he were at the bottom. The relocation to Bangalore meant learning a new language, finding a new place to live and not being able to depend on anyone else.

Because he had become a Christian, Brian’s Hindu family disowned him, and most of Esther’s relations were deceased. The college-educated Brian couldn’t find work, and when he did, it was usually a laborer’s job.

“I was feeling so depressed,” he says, sitting in the living room of the Deals’ spacious home in Lexington. “I felt the Lord had forsaken me. I was thinking of killing myself.”

One day Esther’s uncle, a minister, dropped in on the Rexes, and he was carrying many shoeboxes from Operation Christmas Child with him. He asked the couple to choose one, and they pulled the shoebox Judy had prepared from the stack.

The things inside the box, including a pink outfit for a little girl, were perfect gifts for Fabiana, who was only 2 at the time.

“We were so happy, and we celebrated that Christmas,”  Brian Rex says.

It was only by chance that Brian returned to the shoebox later and noticed a card, with an angel on front, and an address from the shoebox’s sender. Brian says he thought of a story in Luke, in which one of 10 lepers returned to Jesus and gave him thanks for cleaning him of the disease.

Rex decided to write back.

Fashioning that letter took about a week, and Brian had no idea where Lexington was or even what country it was in.

“I didn’t expect anything,” Brian says. “I didn’t think I would get a reply.”

It was months later in 2006 that Brian Rex’s letter reached the Deals, and William sheepishly acknowledges that he put it with other papers headed for the trash. When he skimmed it, he thought Brian’s letter might be one of those mass-produced items made to look like it wasn’t.

Judy Deal later read the handwritten letter more closely and realized her shoebox had made a difference for the family in India. She wrote back. More letters, emails and telephone calls between the Rexes and Deals followed through the years, especially on birthdays, anniversaries and holidays.

“Whatever happens in my life,” Brian Rex says, “I share with them.”

But there’s a lot more. The Deals, who never had children of their own, bought Brian a bicycle, because he had been walking the equivalent of 10 miles a day in trying to find work.

The Deals later purchased him a Honda motor scooter and, more recently, a Nano car. He has found a niche, using his skills in English to transcribe things for doctors. Brian, who has a college degree in economics, speaks five languages.

His new employer allowed him the time to make this special family trip to the United States.

When Esther was pregnant with Joe and out of concern for her medical care, the Deals sent the Rexes $347 to make sure she could deliver at a privately run hospital that was better staffed and equipped. Brian was only making $100 a month at the time, and Esther had previously lost a baby because of the poor facilities.

At his birth, Joseph, who will turn 8 in June, was given the middle name of William in tribute to William Deal.

The Lexington couple also have paid for a space heater for the Rexes’ small, one-room home and have been sponsors for the children’s education, allowing them to attend an English-speaking school in Bangalore.

Fabiana says she wants to become a pediatrician some day; Joe, a robotics engineer.

A much wider community also has become involved, especially the congregation at the Deals’ church, First United Methodist in Lexington. Monetary donations from the community have gone to the Rexes’ church in India, enough to purchase school supplies for more than 100 children and provide assistance for orphans and widows in the church who have no support system.

Yard sales, movie nights and contributions to well-placed piggy banks also have helped in raising funds for the Rexes’ trip and stay in the United States. While the Deals have funded things such as passports, visas and plane tickets, they’ve also relied on the community’s help toward expenses such as hotel stays, food and souvenirs.

“We have had a lot of help,” says William Deal, who before retirement was Lexington’s fire chief for 17 years and also recently retired as Davidson County’s tourism director.

Linda Deal, a retired  employee of the Davidson County Department of Social Services, says she and William often have been asked why they didn’t go to India instead.

“We thought it was important for them to see all the family they had in the United States,” she says.

Obtaining the visa the Rexes needed for their trip wasn’t simple. The Deals filled out 80 pages of paperwork, including detailed financial information showing they had the resources to bring the Rexes here and pay for their way back.

On his end, Brian Rex was having trouble getting his application approved by the U.S. embassy until he showed them a 2007 newspaper article from the Lexington Dispatch detailing the connection his family had to the Deals in the United States.

The approved window of time also was crucial. The Deals hoped the Rexes could come during April and May, the months Fabiana and Joseph were out of school.

The Rexes had never been out of India before and no one in the family had been on an airplane. Their India-to-New York trip, which experienced some delays, took 22 hours before they landed in New York on March 31.

The Deals met them there, leading to a three-day tour of the city, a train trip to Washington and another three days of seeing the sights in the nation’s capital.

On April 7, when they traveled by Amtrak home — William Deal is a self-professed train nut — the Deals and their adopted family from India arrived in Salisbury, where Gladys was there to greet them.

“Those kids fell all over me,’ Gladys says, “and with tears in his eyes, he (Brian) looked at me and said, ‘Judy is my angel.'”

After the initial touring and traveling, Judy and William Deal wanted to give the Rexes a chance to settle in and show them a more typical day. William mowed the grass. Judy did some laundry and went to the grocery store.

“Every day is new for us,” Brian Rex says.

Gladys Castor traveled with the Deals and Rexes to the Outer Banks for about a week. She could still climb to the top of every lighthouse they visited.

The Deals also took their adopted family to the mountains, which included a ride on the Great Smoky Mountain Railroad. They have visited attractions such as the Wright Brothers Museum and the N.C. Zoo,.

“We didn’t do Murphy to Manteo, but we came close,” Judy Deal says.

At month’s end, a trip to Disney World in Orlando, Fla., is on the agenda.

Brian Rex (Esther does not speak English) has been giving testimonials at various churches. First Methodist Church in Lexington also held a meet-and-greet with the family April 21. Those attending were encouraged to bring two items for Operation Christmas Child and $5 toward shipping costs for shoeboxes.

Judy Deal also has fashioned a video in which Brian Rex tells viewers how much a single shoebox meant to his family.

Around the Deals’ house, there has been plenty to do. The children can be lost for hours in the basement, where among other things, William has built an elaborate village of trains and buildings.

Earlier this week, William Deal’s miniature outdoor train came back from Ohio where the engine was being completely reconditioned for his one-man railroad at home. Deal’s train comes from what used to be the Hitching Post Drive-in Theatre on U.S. 29 South in Salisbury (later Joe’s Drive-in) and is similar to one at Dan Nicholas Park.

He has 1,000 feet of navigable track encircling his house, and when the Deals give directions to their home, they like to say it’s the first house on the left with a train.

During her stay, Fabiana wanted to learn how to swim, so she has been attending swim lessons at the Y.

Meanwhile, Judy has been sharing some of her baking skills with the Rexes, while they have been offering up some of their Indian cuisine. It’s hot to the palate, though the Rexes say they’re probably cutting the normal amount of spices in half.

“It opened my sinuses,” Castor says. “I had to have a glass of water quick.”

When Gladys talks about her daughter and son-in-law’s shoebox story and the additional family she has welcomed into her life because of it, she doesn’t want her other family to feel left out.

Gladys makes loving mention of daughter Brenda and son Jerry, her five grandchildren and now six great-grandchildren. One of her grandsons, Jerry Jr., is a wounded warrior, and another is a Kannapolis police officer. She also considers dear friend Carol James an adopted daughter.

A good portion of proceeds from her yard sales this weekend will go toward her church’s efforts in raising money for shoeboxes. Last year, the Highest Praise Family Worship Center on Bostian Road wrote a check for $4,700 toward the Operation Christmas Child effort, “and I’d like to help them out with this,” Castor says.

For inspirational purposes, the Rex family probably will be at the yard sale at 450 Roseman Road Friday and Saturday mornings.

Next month, right before the Rexes go back to India June 15, Gladys has arranged for a big event at Highest Praise to celebrate her 83rd birthday and Joe’s 8th.

“We are having a party,” she says. “You bring a covered dish and something for a shoebox if you want to eat.”

Gladys Castor and her whole family — from the United States to India — know now the hope even one shoebox can foster.

Besides, you do a lot for family.