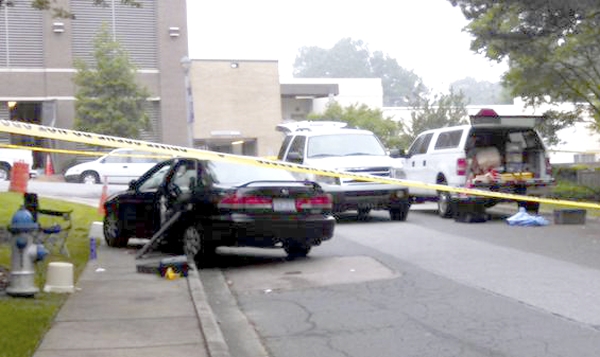 Shavonne Walker/Salisbury Post Crime scene investigators work on the murder victim's car on Annandale Avenue, near Novant Health Rowan Medical Center. The victim, Kejuan Dishad Lamont Sweat, 22, drove from an apartment in East Spencer, below, where he was shot. The apartment is at the corner of South Long and West Cauble streets. Three children were in the vehicile, one of whom was struck by a bullet and taken to Carolinas Medical Center.

EAST SPENCER — No motive has been confirmed in the Thursday morning shooting and subsequent death of an East Spencer man, which authorities say began outside a South Long Street apartment building.

Kejuan Dishad Lamont Sweat, 22, of the 800 block of South Long Street, was shot at the apartment building where he lived, along with a 4-year-old child, sometime after midnight. There was also a 5-year-old and a 2-year-old in the vehicle, both of whom were not injured. He drove to Novant Health Rowan Medical Center to get help, officials said.

A blue sport utility vehicle parked in front of the apartment building had several bullet holes in the rear, right quarter panel. The Honda that Sweat was sitting inside was between the SUV and a black BMW. Investigators later asked the owner of the BMW to move the vehicle back to where it would have been during the shooting.

Crime scene tape was wrapped around the front and sides of the small apartment building, which is located not far from Boral Brick. Investigators spoke to the owner of the SUV.

Salisbury Police investigators found Sweat in the Honda at the corner of Annandale Avenue and West Henderson Street, across from Hurley Park and Novant Health Rowan Medical Center. Investigators found the wrecked car riddled with bullet holes in the left passenger side door.

He said investigators still have to interview the children’s mother.

No arrests were made in the investigation, but Underwood said investigators have “quite a few leads.”

When asked if the shooting involved possible drug activity, the investigator said there are a lot of rumors and speculation about the incident.

The State Bureau of Investigation is investigating with assistance from Salisbury police and the East Spencer Police Department.

This is the second murder this week. On Monday, 18-year-old Steven Omari Rosario was shot and killed in Salisbury at a South Fulton Street apartment building. No arrest has been made in that incident.