Beverly Fowler rises to the top at Salisbury Academy 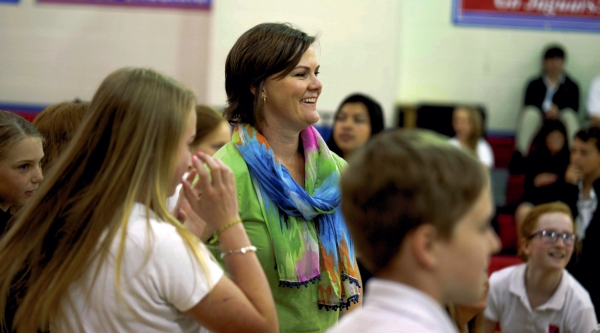 Salisbury Academy's Beverly Fowler reflects back on her first year as Head of School. Fowler with the middle school students during a weekly advisory session.

Beverly Fowler is no stranger to Salisbury Academy – she’s been involved with the school since 2001, and has served as a classroom teacher, tutor, lower school division director and admissions director.

This year, however, Fowler embarked on a new adventure with Salisbury Academy, this time as head of school.

“It’s been a great first year,” she said.

“You wear a a lot of different hats,” she said, adding that she’s had to work on “finding the best balance.”

It’s no surprise that Fowler has found such success at Salisbury Academy.

“I always loved education,” she said.

Even as a little girl, she would line up all her stuffed animals and teach them lessons.

Each year, she would help a family friend set up her classroom before school started.

“The highlight was getting to use the laminator,” she laughed.

The Greenville native began her college career in Virginia majoring in education, but when she transferred to Asbury University in Wilmore, Kentucky, she changed her major to communications.

After graduation, however, she was called back into the world of education when she took a job as a teacher assistant.

“I absolutely fell in love with it,” she said.

Throughout the school year, the teacher she worked with gave Fowler more and more responsibility, and by the end of the year, she knew she wanted to pursue a career in teaching.

“I went back and took the classes I needed to take for my teaching certificate,” she said.

The following year, Fowler and her husband, Chris, relocated back to North Carolina, where she spent the first year teaching technology at Cannon School in Concord.

“With my communications classes, I did a lot of computer course work,” she said.

After a year, she found an opening for an elementary school teacher at Salisbury Academy.

She taught fifth grade for two years, then took a break from teaching when her first son, Will, was born. Her second son, Luke, was born several years later.

Even though she wasn’t teaching in the classroom, Fowler didn’t neglect her love for education – she tutored until she returned as a teacher in 2007.

She later added admissions to her responsibilities, and led the school’s enrollment numbers to a 10-year record.

Fowler said she really enjoyed her role as director of admissions. “You’re the first face everyone sees when they come to the school.”

“I feel like I’ve touched a lot of different points in the school,” she said.

But her favorite part of being a teacher and administrator is the relationships she gets to build with the students.

“I love getting to know them as individuals,” Fowler said.

Just because she isn’t in the classroom anymore doesn’t mean Fowler doesn’t still have relationships with her students. She still leads a middle school advisory group on a weekly basis.

Fowler said she’s a “big picture” thinker. “It’s part of the reason I applied for the head of school job.”

“I felt like we had done a lot of good work as a school toward some strategic goals,” she said, adding that she and the school’s board of trustees have been working to further develop those goals.

“Current goals for us are always very important,” she said.

One of the school’s main focuses is developing and expanding upon its environmental science program for students in a way that compliments what’s already going on in the classroom.

It’s important to create “conservation-minded” students early in life so those habits will extend into their adulthood, Fowler said. “We believe we are raising and teaching future leaders.”

The emphasis on environmental stewardship has been dubbed “Project Green Space.”

It began with a partnership with Catawba College and grew from there. The college used Salisbury Academy as a site for an environmental study.

As a part of Project Green Space, Salisbury Academy is working toward its certification with North Carolina Green Schools, establishing a fund to support on-campus investments in clean energy and resource reduction, and will be partnering with North Carolina State University’s College of Design to design outdoor learning areas.

“That will truly be a transformative process that takes place on our campus over the next 3 to 5 years,” Fowler said.

Not only will students spend more time learning from their environment, they’ll also be able to work on problem-based learning projects based on the changes happening around campus.

“It really goes along well with our approach to experiential education,” she said, adding that environmental science lends itself well to hands-on learning.

Salisbury Academy is also focusing on “growing smart” as it nears capacity, she said. There are 200 students in junior kindergarten through eighth grade at Salisbury Academy, and the school’s capacity is 220.