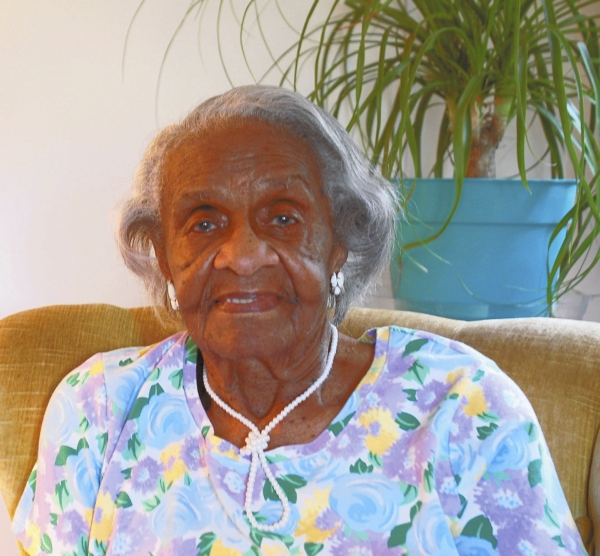 You have to like what you see in ‘Monnie’

LANDIS — Margaret Ellen Reid Russell Sherrill — friends and family call her “Monnie” — deserves a name this long. She’s approaching her 100th birthday Sunday and already has packed a lot into her century of living.

For years, she worked as a seamstress for Purcell’s dress shop in Salisbury. If you’re old enough, you might have seen her dressing the mannequins in the window displays of the South Main Street store.

You also might have noticed her at Dan Nicholas Park, fishing all day with one of her grandchildren. At Sandy Ridge AME Zion Church, where she has been a lifelong member, she sang for decades in two choirs, was always active in Sunday School and clubs, and became a cherished mother to the whole congregation.

When someone had a death in the family, it often was Monnie who was first at the door, looking for ways to help. A good way to describe her, daughter Jennie Wright says, would be to use the word “resourceful.”

No one can touch the way she cooks her signature dish — steamed cabbage with fatback and crushed red pepper. She also has a compulsion for tidiness. “She could wear out a broom faster than anyone you know,” son John Russell Jr. says.

Monnie also used to keep an immaculate landscape around the house. “Her yard was always blooming,” Russell says.

Wright says her mother has a knack for seeing beauty in everything. The other day, when she was passing the Interstate 85 site off Julian Road where a new shopping center is going up, Monnie mentioned how beautiful a big mound of dirt was.

She loved the rich color of the red clay, she told her children.

Monnie still receives many compliments about her own beauty. She has a standard reply.

And when the inevitable question comes about her secret to a long life, she likes to say, “When you got something good, hold on, don’t turn it loose.”

Monnie has always been a high-energy individual. Wright theorizes her mother’s constant activity through the years is a big reason Monnie has fared so well physically. She moves without the aid of a walker or wheelchair. She still helps John Jr. with the dishes and travels to the AAU basketball games of a grandson.

Because she likes to be social, Monnie attends the Trinity Living Center in Salisbury three times a week and participates in most every activity the place offers.

But she still doesn’t understand what all the fuss is about. Her children try to persuade Monnie that turning 100 is a milestone, but she protests: “I’m wondering what’s bringing on all this,” she says.

Monnie will have a big weekend. Friday afternoon, the folks at Trinity Living Center, where she is the oldest participant, are holding a small party for her.

An invitation-only celebration will be held at noon Saturday at First Reformed Family Life Center in Landis. John Jr. estimates that 250 people will be attending from as far away as California, Colorado, Maryland, Georgia and Virginia, besides both Carolinas.

In addition to all her friends, Monnie has four children, nine grandchildren and 14 great-grandchildren.

Toward the end of Sunday’s church service at Sandy Ridge, church members will present Monnie with single long-stem roses. Then, everyone will regroup in the Aggrey Fellowship Hall for ice cream and cake.

Just last Sunday, Monnie was paid special tribute during Sandy Ridge’s 149th anniversary and recognized as “Our Mother of the Church.”

Margaret Ellen Reid grew up as the oldest of three children of Shirley and Jennie Harris Reid. Her mother, Jennie, died when she was only 8, leaving her to be raised by her father, her Granda Nellie and many others in her extended family.

Monnie’s birthplace was within sight of Sandy Ridge Church and Aggrey Memorial School in an area old-timers called Sechler’s Pond. She attended all 11 grades of Aggrey School and was a domestic worker for awhile before she landed a job with Richard Dobkin’s Purcell’s store in downtown Kannapolis.

It was in Kannapolis that Margaret Reid met John Harrison Russell, who was working at the YMCA and also delivering mail. He later would join the Navy, earn an associate degree in business from Carver College and also work at Cannon Mills before landing a job at the VA Medical Center in Salisbury when it first opened.

She has never driven a car, so she would take a bus to Salisbury in the mornings or catch a ride with someone. John Sr. usually would swing by the store after his shift at the VA hospital and drive her home in the evenings.

Jennie Wright says her mother always had a hot breakfast on the table for her children before they left for school, and she made dinner for the family after work.

“We were well taken care of, even though she worked outside the home,” Jennie says.

The kids’ paternal grandparents lived within walking distance, and an aunt and uncle also were in a house next door.

For many years, the Russell family lived near the Landis-North Kannapolis line off U.S. 29-A. John Sr. built the one-story house around 1950, and it offered the kids a huge backyard and a black-and-white cocker spaniel named Lady.

At Purcell’s, besides being responsible for alterations and working on the window displays, Monnie loved the days when new merchandise would arrive, because it was her duty to open the boxes and hang up all the items.

“I loved every minute of it,” Monnie says of her years at Purcell’s.

She learned quickly the elements of style and fashion — what to wear and and what not to wear. Sometimes the ready-to-wear dresses were sold right off the mannequins in the front windows.

Monnie laughs, remembering the day a man on the street rapped on the window and complained about the nude mannequins. Monnie then made it her personal job to wrap any naked mannequin with an overcoat until a new dress was added.

Monnie Russell worked at Purcell’s in Salisbury until 1968, the year John Sr. died from injuries he suffered in a workplace accident at the Swink plant, It was a second job, besides the one he had at the VA.

In 1978, Monnie married Jim Sherrill, a Rowan County native who had spent his adult life working in New York, eventually retiring as a bank security officer. Sherrill returned to the South and built the home where Monnie now lives on North Cannon Boulevard.

Margaret Ellen Reid Russell Sherrill has a long name and a long life that measures up to it. If there has been one frustration in living this long, Monnie says it’s this:

“My biggest problem is I can’t remember it all.”

That’s a minor thing, for a woman who sees beauty in everything.

The ballad of Bonnie and Clyde: Rare twin foals born in Salisbury

SALISBURY — When you see Bonnie and Clyde frolicking together outside their barn, it never crosses your mind they are... read more