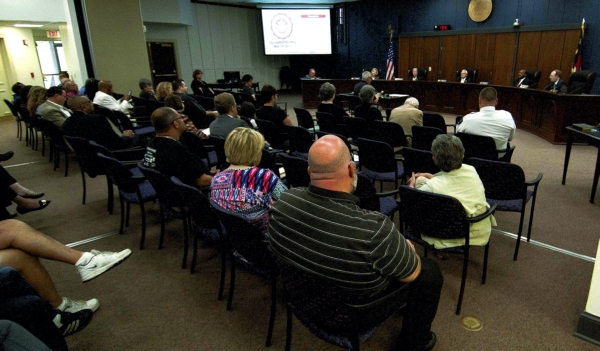 At least 20 people spoke directly to Woodson during the public comments portion of Tuesday’s City Council meeting, asking the mayor to show that Salisbury is place where all people are treated equally.

“It’s time that you see the faces of people that this affects, and that you know its impact.” Tamara Sheffield, Salisbury Pride committee president, told Woodson.

Issuing a proclamation is a decision the mayor alone makes. And the city has guidelines for it. Woodson has said Salisbury Pride’s request for a proclamation does not meet the guidelines, which state: Proclamations regarding matters of controversy, taking sides in political debate or addressing personal conviction will not be issued.

After Tuesday’s meeting, Woodson said the speakers did a really good job of making their case and that he will sit down and weigh the decision. He said he has not yet made a decision about a proclamation for this year’s festival, which will be held June 20 and normally has thousands of participants.

People at the meeting supporting Salisbury Pride wore ribbons, with the colors of the rainbow, pinned to their shirts.

Men and women, young and old, spoke in support of the proclamation.

Jamie Monroe, a transgender woman, spoke about being bullied when she was growing up and how she knew other LGBT people who committed suicide due to the abuse they suffered.

Monroe said she too contemplated suicide when she was younger.

“Please give us our proclamation,” she asked Woodson.

Emotions were hard to contain for some speakers, and most received applause from the audience after they were done speaking.

“The mayor that issues the proclamation is the mayor for everyone,” she said.

Woodson, and the other council members, listened intently to each speaker. And Woodson thanked each person for their comments after they finished speaking. He said he would take all of the comments into consideration.

Several speakers invoked the city’s mission statement, which includes a focus on: inclusion and diversity, honesty and integrity, and fairness and equality. People also expressed their affection for the community in Salisbury.

Mary Frances Edens asked the mayor to be “on the right side of history.”

Christopher Eller grew up in Salisbury and said he was afraid when he was young because he was bullied by kids in school and strangers on the street. He moved away but came back to Salisbury as an adult, though he said he was still afraid.

“Would the shadows rise up and steal away the confidence I developed outside the city?” he asked himself when moving back to Salisbury.

But, Eller said, he has found an extended family in the members of Salisbury Pride. “I have never felt so warmly welcomed and appreciated just for being me,” he said.

The last person to address Woodson was 92-year-old W.C. “Bill” Stanback — son of the late Dr. Tom Stanback. He was wearing a suit with a rainbow ribbon pinned to the jacket.

His daughter is a lesbian, he said.

“If you have a child whose fate is wrapped up in the future of how you’re considered by your fellow citizens, you become interested as I have.”

“I urge you to issue such a proclamation …,” he told Woodson as he headed back to his seat while people stood to applaud.