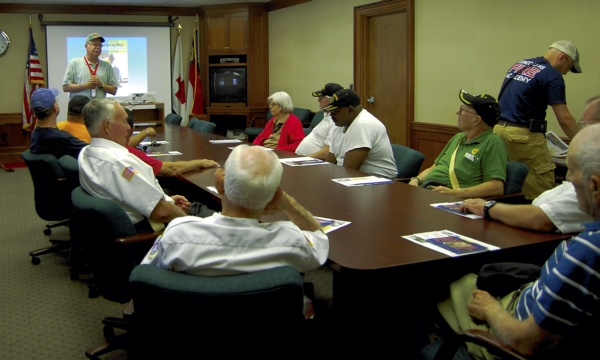 Allana Ansbro/ Salisbury Post Mike Hibler, a veteran and volunteer at the Red Cross talks to veterans about safety at the Dole Chapter of the Red Cross.

The Elizabeth Hanford Dole Chapter of the American Red Cross hosted a presentation Tuesday aimed at keeping veterans safe in their homes.

It was the latest event in a partnership formed in October 2014, when Bruns and Thomas began working together on the Home Fire Preparedness Campaign.

The campaign began when it came to their attention that a large number of people in the county did not have smoke alarms in their homes. Bruns said she sees the program as a way of “re-educating people” to show the importance of residential smoke alarms. She said Tuesday’s presentation was meant to “show the veterans they aren’t forgotten” and that “we care about them.”

Thomas gave the veterans tips on how to prevent home fires, including: being sure to smoke outside, making room for space heaters, staying in the kitchen when frying food, making sure there are working smoke alarms in the home, knowing the local emergency number, and planning an escape route around physical abilities.

The second part of the presentation focused on how to prevent falls. Thomas said one in three people over the age of 65 fall every year. Of those, fewer than half will talk to a health-care provider about the fall. Thomas said she wants the veterans to know they should not be embarrassed about falling and that it is something that happens to everyone.

Tips she gave on preventing falls included: exercising regularly, taking your time, keeping walkways and stairways clear, improving lighting inside and outside the house, using non-slip mats in bathrooms, being aware of uneven floor surfaces, and having sturdy and well-fitting shoes.

By Shavonne Walker shavonne.walker@salisburypost.com In police reports: • A woman reported on Thursday she was the victim of a burglary... read more