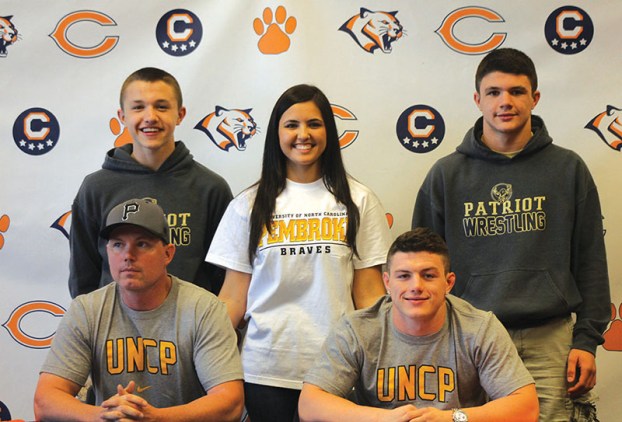 CHINA GROVE — Maybe it surprised people that a guy who rushed for nearly 5,000 yards in his high school career signed a wrestling scholarship, but that’s been Brandon Sloop’s master plan for nine years.

“I love football, and I’ll always love football,” the Carson senior said. “But wrestling has been my No. 1 sport since third grade. I’ve always been pretty athletic, and the first time I wrestled I knew it was something I could do well.”

Sloop was the Dutch Meyer Award winner as Rowan County Wrestler of the Year. He was the Most Outstanding Wrestler in the South Piedmont Conference Tournament. He was a champion in the 3A Midwest Regional, and he was a state champion at 170 pounds.

You probably already have heard how Sloop accomplished all those things while wrestling with a torn ACL, but it’s such an astounding feat that it bears repeating. He tore the ACL in the 10th game of the football season.

“He had one leg that didn’t work and he was still focused enough to win a state championship, ” Carson wrestling coach Bryce Vandenberg said.

Sloop says he’s glad he didn’t know how serious his injury was until he had an MRI halfway through the season.

“If I’d known before the season, it might’ve messed with my head a little bit,” Sloop said. “But at that point, nothing was stopping me.”

“He was a four-year captain because even when he was a freshman he was that guy who always was doing what he was supposed to be doing,” Vandenberg said. “If there was something extra you could do to help you be successful, he was that guy doing it. He set a great example.”

Sloop won his state title in February. He had surgery to repair the torn ligament in April. The surgery forced him to miss the baseball season, another sport he’s pretty good at.

“The knee is coming along better than I thought it would,” Sloop said. “I try to push it every day in rehab.”

Sloop’s final two schools in recruiting were Gardner-Webb and UNC Pembroke. He visited both.

The Braves have an exceptional wrestling program that went 13-4 last winter and boasts a two-time national champion in 141-pounder Daniel Ownbey. The Braves tied for 11th in the D-II national tournament in St. Louis.

“The coach walked me around campus, and he talked about building a national championship team at UNC Pembroke, and that’s exactly what I want to be a part of,” Sloop said. “They’re setting really high goals. They’re bringing in a lot of state champions.”

Sloop said he expects to redshirt his first year to give his knee a chance to heal. He has a plan for his life in place. He wants to major in criminal justice, and his goal is to be a highway patrolman.

Sloop was a big part of Carson’s first Rowan County Tournament championship as a senior, but the work ethic he brought to the team was just as important as the wins. He set the bar high at Carson for wrestlers who will follow.

“He’s the first Carson Cougar to sign a wrestling scholarship,” Vandenberg said. “His signing is big for our program.”

Carson football coach Joe Pinyan dropped by to watch Sloop sign. Sloop’s heart belonged to wrestling, but that didn’t stop him from putting maximum effort into football every fall.

“He could play college football at a lot of places if that’s what he wanted to do,” Pinyan said. “He’s just one of those special, competitive athletes.”

Golf: Kisner staying on the grind

After walking off course Sunday at Quail Hollow Club, there is only one place Kevin Kisner wanted to go. “A... read more