Fundraiser for retired Lexington officer who is wheelchair bound 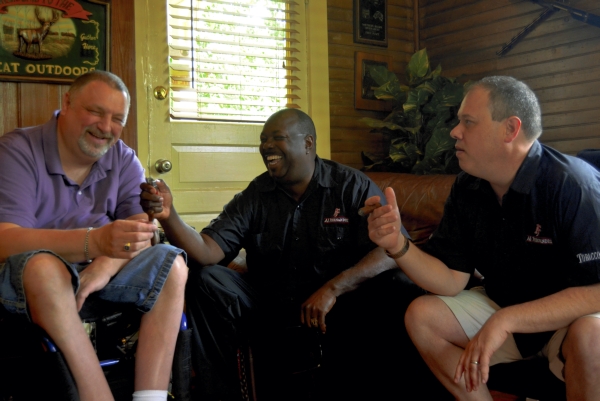 Retired Lexington Police officer David Parde, left, has been paralyzed since 1992 after he responded to a call and was shot from behind. His friends, Jeff Watkins, center, and Perfect Smoke owner, Darren Moody, are organizing and hosting a May 29 fundraiser at the smoke shop to help Parde with expenses for a new wheelchair lift and van. Shavonne Walker/Salisbury Post

Most days at the Perfect Smoke Cigar Lounge jokes fly as casually as the smoke wafts through the South Lee Street establishment. David Parde, in his usual spot by the front lounge, is either making the joke or laughing at one.

In May 1992, Parde, then a Lexington police officer, was responding to a suspicious person call at an apartment complex with two partners, one a rookie officer. Three teens disguised as Domino’s delivery men were at the building. One officer attempted to warn Parde about a suspect who was above him. It was too late — a bullet struck Parde in the left shoulder, traveled through to the back part of his rib cage and went through his lung.

He fell to the ground thinking he’d tripped, but the bullet severed his spinal cord. Parde was paralyzed from the chest down.

Parde uses a wheelchair-accessible van, but over the years the van and the lift have become worn. The van has nearly reached 242,000 miles. The lift has undergone repairs and has been refurbished three times.

The lift is 15 years old and the van also requires hand controls to assist Parde in moving the steering wheel.

His friends at Perfect Smoke saw Parde’s many unsuccessful attempts to obtain law enforcement grants that would assist him in paying for the van and lift.

While the Lexington resident continued to search for grants and other funding, Perfect Smoke owner Darren Moody and others were working behind the scenes organizing a fundraiser.

The fundraiser will be held from 7 p.m. to 11 p.m., May 29, at the business, 213 S. Lee St. Local merchants have donated items for door prizes, while silent auction items include a humidor and mirror from Ventura Cigar and an alarm system with one year of free monitoring from Simply Solutions of Salisbury.

The men, who include friend Jeff Watkins, Jonathan Black and Marcy Hiers, have been planning for about four months.

“He is a true inspiration, his sense of humor, and he has a heart of gold,” Black said.

Parde’s favorite saying is he’s “rolling right along,” and he’s the same guy he was before the shooting — just a little shorter.

“If you get to know all he’s been through, he’s got the best attitude,” Hiers said.

Watkins said Parde has had the best attitude since the first time he met him. Parde called the lounge to see if it was handicapped accessible. Watkins answered that call and ever since Parde has had prime parking on the side of the building. A wheelchair sign with a “Hot Wheels” sticker marks his spot. The moniker stuck and since that time, Parde has been known as “Hot Wheels.”

A GoFundMe page was created by Parde’s wife, Julie, and has raised $7,110.

The Perfect Smoke, located at 213 S. Lee St., around the corner from the Norvell Theater.

Parde needs a new van and lift equipment, but the Perfect Smoke and friends are raising funds for the lift. A lift must be purchased and ready to install before he’s able to buy a van, Parde explained.

The fundraiser is co-sponsored by Ventura Cigar Company.

For more information about the fundraiser, visit www.theperfectsmoke.net. Click on the events page for more details.

A second fundraiser for Parde is also planned for June 6 at Fritts Farm, 453 Pilgrim Church Road, Lexington. The event, goat roping, will be begin at 10:30 a.m. with books opening at 8 a.m.

The admission is $3 per person and children under five are free. Roping is $20 per team with unlimited entries, cash only, paying three holes, bring your own rope. No horses are needed to participate.

A percentage of the proceeds will benefit Parde. Concessions will be on site, a silent auction will take place from 8 a.m. to 1 p.m., spectators are welcome and encouraged to bring lawn chairs. There will also be a gun raffle.