The ballad of Bonnie and Clyde: Rare twin foals born in Salisbury 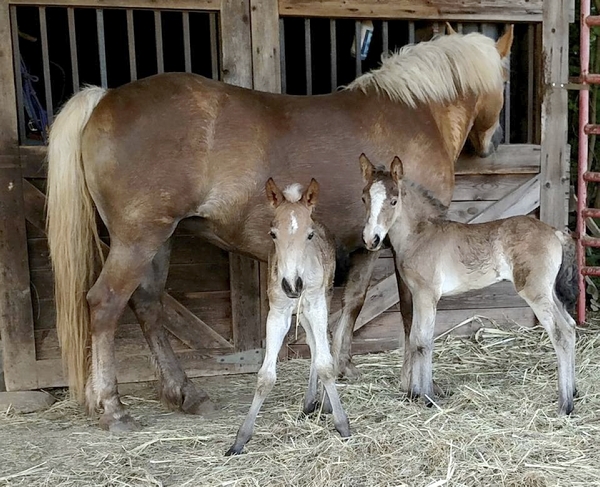 SALISBURY — When you see Bonnie and Clyde frolicking together outside their barn, it never crosses your mind they are named after notorious criminals who once were public enemy No. 1.

These twin foals, who will be three weeks old Wednesday, seem only to be robbing hearts, not banks.

Just the fact Bonnie and Clyde were born and survived is pretty much a miracle.

“It’s very rare,” Dr. Bernie Eberle of Rowan Animal Clinic says of twin horses reaching full term and coming through the birth. “I believe the statistics are less than 1 percent. … This is really cool.”

Breeders who determine their mares are pregnant with twins often will sacrifice one of the unborn to give the other twin and the mare a better chance of surviving.

Tarlton, an experienced horsewoman, never had the chance to make that decision because she didn’t realize her mare, Beauty, was carrying twins. She traded for Beauty in January and couldn’t help but notice how the horse was putting on significant weight.

Tarlton called Beauty’s former owner, who acknowledged she had been in a pasture last summer with his sport horse, a big Percheron that was only 2 years old at the time. Tarlton knew that horse was probably old enough to impregnate Beauty.

“Sure enough, she was expecting,” she says. “I was concerned the baby was too large. Of all the scenarios,, twins never crossed my mind.”

Tarlton has been around horses her whole life. She makes her living as an auctioneer, often for livestock, and her grandparents and parents traded in horses, too. In all those years, she had never seen twins born. The man who supplies her with hay, Chris Cline, noticed Beauty’s size one day and said jokingly, “You don’t reckon that mare’s having twins, do you?”

But Tarlton was thinking the baby on the way was going to be “super huge,” and she expected Beauty was going to need some human assistance. She was keeping a close watch on Beauty, though she had no idea what the approximate birthdate should be. Horses have a gestation period of about 11 months and a week, but it can sometimes go a full year, Tarlton says.

Beauty is a sweetheart of a horse that always nickered a morning greeting on the way to meeting Tarlton by the gate. On the morning of April 29, Tarlton called out to Beauty, who nickered back but stayed in the barn. When Becky reached the mare, she saw a motionless baby next to her.

The foal startled Tarlton by jumping up as soon as she touched it. Then Tarlton saw the other foal and shouted, “Oh, my God, I’ve got twins.”

Beauty had given birth to twins overnight without any help. Eberle says that in itself is pretty noteworthy.

Tarlton knew the first week would be crucial for both foals and Beauty. During the first night, it looked as though Clyde wasn’t going to make it. He was having trouble going to the bathroom and wasn’t nursing.

“He got really weak that night.,” Tarlton says. Friends Brian and Paula Brown and their daughter, Amber, took turns rubbing Clyde’s stomach. Beauty allowed Tarlton to obtain eight ounces of milk from her, and she was able to feed Clyde with it. She also gave him some medicine, an enema and some olive oil before calling it a night and going to bed.

“He was exhausted, and we were, too,” Tarlton says.

The next morning at daybreak, Tarlton hoped the male foal wasn’t dead. Not only was he up and running around, when she reached the barn, but Clyde had squeezed under two gates and was in the same pasture as her stallion.

“He was trying to nurse the stallion,” Tarlton says. “I had to capture the little booger. He has been wide open ever since.”

The foals are still nursing, but they also are eating grain and doing what Tarlton calls “creek-feeding.”

The foals have become celebrities on Tarlton’s Facebook page, and early on, if she missed a day of posting photographs, she would be inundated with private messages asking whether the twins were OK. Tarlton has heard from people she hasn’t seen in 10 years who started dropping by the house — “not to see me,” she adds.

The horses have led to hundreds of shares and thousands of likes on Facebook. Once she had determined the twins and Beauty were out of danger, Tarlton asked her friends to offer names for the pair. “People were submitting names from all over the country,” she says.

Tarlton went with friend Brenda Zimmerman’s suggestion of Bonnie and Clyde. She liked how easy the names were to say, besides the devilish implications they also held.

“That name ‘Clyde’ fits him to the tee,” Tarlton says.

The horses like to play and “rassle” with each other, Tarlton says,. They already are losing some baby fuzz around their faces. Bonnie has a white blaze on her  face like her mother — a good way to tell them apart.

Tarlton says they like to sleep close to each other and still appear to be nursing well. She describes their color as buckskin with black points on their ears and legs. “They have done a lot of curiosity things,” Tarlton says.

In her own online research, Tarlton has found numbers that say only one in 10,000 mares carry twins full term and only one in 15,000 have successful births of twins. Since the arrival of Bonnie and Clyde has gone viral, Tarlton has received word of twins having been born recently in Minnesota and Oregon.

Beauty is about 6 years old, 14 hands tall and a full-blooded Haflinger, a chestnut-colored horse that is sort of stocky. Tarlton says she would be great as a lessons horse, a therapy horse or would do well harnessed to a wagon or cart. But for now, motherhood is her job.

If attending her auctions and looking after four adult horses and the twin foals wasn’t enough, Tarlton also raises miniature Australian shepherds. On the same day as Bonnie and Clyde were born, one of her dogs had a litter of five puppies. Another litter is due any day.