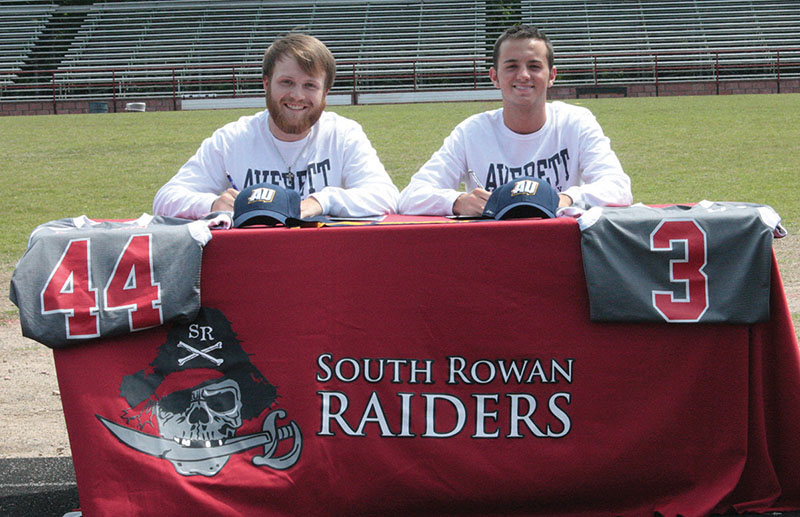 “It was a YFL (Youth Football League) practice,” Kennerly said. “I saw this strong-looking kid standing at the fence watching, and I told him he needed to be practicing with us. He told me to wait until middle school.  That’s when Burke joined us, and I guess the rest is history.”

“Starting with middle school, we always made a pretty good combination,” Fulcher said. “I remember us playing together at  Corriher-Lipe and beating China Grove in our last game of the year. That’s one of my favorite memories.”

Kennerly, a quarterback, and Fulcher, a linebacker, grew up to become two of the better players and leaders for South Rowan teams that competed hard but enjoyed only occasional victories.

It wasn’t something the two Raiders planned, but they’ll continue to be teammates in the future. Both have decided to continue their football careers and educations at Averett University, a Division III school in Danville, Va..

Families, coaches, friends and teammates celebrated that decision in the football stadium where both played their hearts out. Fulcher and Kennerly will never be confused for twins, but they even dressed alike for the occasion.

“It’s pretty cool,” Fulcher said. “We’ve always had each other’s back and we’ve always pushed each other. It’s not like we set out to go to college together. It’s just that Averett was the right fit for both of us. ”

Fulcher, 5-foot-10 and 210 pounds, was durable and productive, a guy the Raiders could always count on to make tackles.

As former South Rowan head coach Jason Rollins said, “Burke brings everything he has, puts his whole body into every tackle. He’s gotten better one day at a time and one stride at a time.”

Fulcher’s best game as a senior was in South Rowan’s 18-13 win at Northwest Cabarrus. The Raiders held the Trojans to minus rushing yards and won at NWC for the first time in 18 years. Fulcher had seven tackles for loss, including two solo sacks and three shared sacks. He also accounted for one of the Raiders’ two safeties.

Fulcher is a good baseball player as a pitcher and first baseman, but it’s been clear for a while his heart was with football. In the summer months, he’s always passed on American Legion baseball to lift weights and go to football camps.

Fulcher also is an excellent student. He’s known since March that Averett, which has a strong athletic training program, was his likely destination.

Talking about his career at South Rowan, Kennerly said there were “bumps in the road.” That’s putting it mildly.

As a sophomore, he was supposed to  learn the ropes as varsity standout Nathan Lambert’s understudy, but Lambert was injured in the Raiders’ seventh game, and Kennerly had to grow up quickly. In his second game as a starter, the kid they called “A-Rod”  threw for 237 yards.

Kennerly was injured in the last game of his sophomore season. He also had his junior season ended by injury and his senior season interrupted.

Somehow, between hospital visits and rehabs, he managed to throw for 2,136 yards. He’s 28th on Rowan County’s all-time passing yardage list. He’s ahead of a lot of household names.

“He was small when he first became the starter and didn’t have some of the physical tools yet,” said Bobby Myers, who has coached South Rowan quarterbacks for years. “So we focused in those early days on reading defenses, on the mental aspects of the game. Now he’s gotten bigger and stronger, but he’s still got that mental foundation as far as playing quarterback.”

Kennerly said several schools were recruiting him back in the fall — before the shoulder injury. A lot of schools vanished after that, but Averett stuck by him. They’d seen enough of him on film to know he could pass and lead.

“I first heard from Averett when I was a junior and I visited there back in the fall,” Kennerly said. “I got a very good vibe from the coaching staff the first time I met them, and even after I got hurt, they let me know there would still be a spot for me. I’ve faced a lot of adversity, so to still be going on to play in college — that’s rewarding.”

While Kennerly has grown to 6 feet, he weighs only 160 pounds. He hopes to be at 175 by the time he reports to Averett.

Kennerly and Fulcher have no plans to room together, but both expect to maintain the tight bond they built as kids.

Added Kennerly, “It’s neat to be going to Averett together and to represent South at the next level together.”

Their school couldn’t be prouder.

“Aaron has come back from so much,” Myers said. “He and Burke are great kids and they’re smart kids. We’re tickled to see them playing together.”